For Republican Carl DeMaio, victory is in sight.

A UT San Diego poll released Monday shows DeMaio polling at 48% and Peters at 45%. Since the difference falls within the poll’s margin of error, the race stands at a virtual tie. This is an improvement from September, when DeMaio dropped below Peters for the first time since polling began in June. 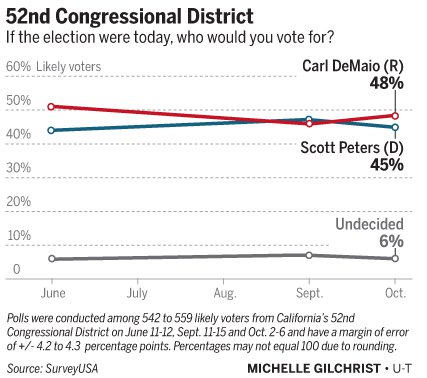 It has been a whirlwind campaign for Peters and especially for DeMaio, who launched his maverick campaign after losing the 2012 mayoral race in San Diego. While Peters has consistently struggled to even appeal to his liberal base—being ranked by liberal bloggers as one of the worst freshman Democrats—DeMaio’s vows to push forward his “Fix Congress First” legislation and his efforts to reach out to traditionally non-Republican are impressing San Diegans and Republicans across the country.

You can read my past coverage of the CA52 race for further details: #CA52: Flip opportunity against 1st term Dem in evenly split district and #CA52 still looking like Republican flip opportunity.

The weak assessments of Peters’ integrity and fiscal responsibility probably stem from his poor record on the San Diego City Council, where he helped sanction large public employee pension plans that nearly bankrupted the city until DeMaio stepped in years later. The UT San Diego also reported on Tuesday that Peters, whose net worth is almost $100 million, charged San Diego taxpayers for a $69,000 BMW as part of his personal car allowance.

DeMaio, meanwhile, has been delicately balancing the various sects of the GOP to his advantage. So far he has successfully branded himself as an independently-minded fiscal conservative and social liberal, which seems like the type of candidate who can win in southern California.

Oddly enough, it seems DeMaio is doing better at appealing to the GOP Establishment. The National Republican Congressional Committee and John Boehner have poured $3.2 million into DeMaio’s campaign and have ignored calls from some conservative groups to abandon gay GOP candidates with other socially liberal views.

Meanwhile, DeMaio recently took further steps to distance himself from the Tea Party by releasing a new campaign ad where he says, “As a proud gay American, I’ve been called a lot of things in my life, but a Tea Party extremist? Nothing could be farther from the truth.”

As DeMaio treads on in the last four weeks, it seems the only way he can lose this election is if the GOP implodes, as it so often does, and fails to rally around him.

What is the problem that we have accepting this guy? No one is asking anyone to approve of his lifestyle or positions on social issues. But despite the even appearance of the party breakdown, California “independents” break about 3-1 for Democrats in most races.

And, he won the primary. As a political party, that should count far more than his ideological difference from some of our base groups.

Sure, I’d be more excited if Ronald Reagan were reincarnated and standing for the seat, but absent a zombie apocalypse, that isn’t happening. DeMaio is our nominee, and his voice for government reform and accountability will be an asset in Washington and beyond.

Funny that the woman in the video is using her work computer to search Tea Party ads. Maybe that’s why she earns less.

not my district, not my vote…

that being said, i still refuse to vote for #CashAndCarry.

that GOPe selected Beltway RINO can take his gun control loving carpet bagging carcass back to whatever East Coast hellhole spawned his worthless self and stay there.

thanks for nothing, you “electable” POS. FOAD, por favor.

Why does every article written about this man feel compelled to share that he is openly gay? I’ve yet to read an article titling someone openly hetero. It shouldn’t be an issue. Everything I’ve read about Demaio leads with that fact. It isn’t germane to the election, nor anything else.

Maybe because so many Democratic Party politicans are
“In the Closet” still?

While I agree that a candidate shouldn’t be defined by his/her race, ethnicity, religion, or sexual orientation, this case is especially noteworthy because: 1) DeMaio doesn’t try to hide it, as evidenced his campaign ads and his public appearances at LGBT-type events, and 2) It shatters Democrats’favorite claim that the GOP is comprised of a bunch of homophobes.

A grass roots group of us homeowners in this district are trying to reroute a massive ($1.7 billion) pork-laden elevated light rail plan that will degrade our neighborhood. The project is so ridiculously expensive for just 11 miles because it avoids an inexpensive on-grade route next to existing heavy rail tracks in deference to environmentalists and special interests. I left a message for Carl DeMaio (R) about this, and he got back to me personally within two hours supporting our position with insightful comments. I was very impressed. His opponent, Scott Peters (D), tells us it’s not a federal issue. But two-thirds of the money his planned to come from the federal government.

As noted elsewhere, the Peters campaign is all about attacking the Tea Party. I know, I get his ads in my mailbox.

I have contributed to Carl’s campaign, and I hope you will, too.