Ben & Jerry’s: Critics of our ice cream name are dazed and confused

Ben & Jerry’s: Critics of our ice cream name are dazed and confused 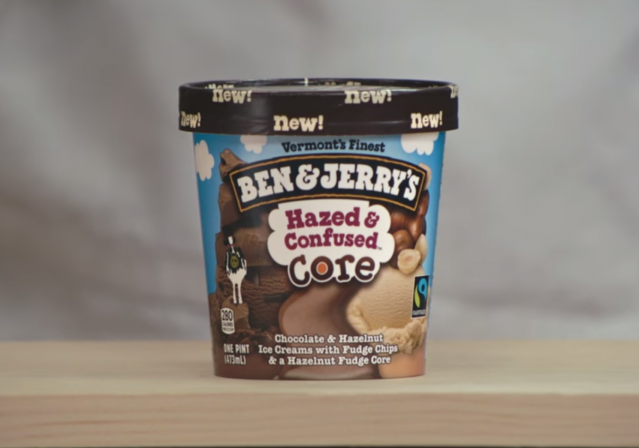 Vermont ice cream maker Ben and Jerry’s drew the ire of the political correctness brigade when they released “Hazed and Confused,” a concoction of chocolate and hazelnut deliciousness.

Part of their new Core series, “Hazed and Confused” is injected with a chocolate, hazelnut, fudge core.

But back to the ice cream. In typical political correctness fashion, everyone who interprets a name, title, or anything else in a self-involved manner has the right to demand the rest of the world cede to their personal point of view. According to Bloomberg News:

The company found nothing in its marketing for the chocolate and hazelnut flavor that “condoned hazing, supported hazing, or even inferred hazing,” said Sean Greenwood, a spokesman for the South Burlington, Vermont-based company, which is owned by Unilever NV. (UNA) Executives also took into account that Internet responses were mostly favorable, he said.

“It didn’t make sense for us to change the name,” Greenwood said. “We named it because it’s a pop culture reference.”

A couple who lost their son to hazing at a college campus were outraged that the ice cream maker would name a product after the sometimes dangerous activity:

The ice cream had been on the market six months without an objection before Lianne and Brian Kowiak of Tampa, Florida, and their allies spoke up. Their 19-year old son, Harrison Kowiak, died of a head injury during a fraternity “hell week” hazing ritual at Lenoir-Rhyne University in Hickory, North Carolina, in 2008. The Kowiaks sued for wrongful death and won an out-of-court settlement. Harrison Kowiak was a Ben & Jerry’s ice cream fan.

“The company completely avoided and didn’t take into consideration what are the unintentional implications of this chosen name,” Brian Kowiak said in an interview following a call he had yesterday with officials at Ben & Jerry’s.

And StopHazing.org had this to say and were even kind enough to offer their assistance in renaming “Hazed and Confused”:

Since Ben & Jerry’s is a “values-based company” and (according to their formal response) agrees that “hazing and bullying have no place in society,” we see an opportunity for the company leadership to act with integrity and rectify this issue. Words are hollow without actions to back them up. If “hazing has no place in society,” why should it have a place in our ice cream cones?

We at StopHazing love ice cream and want to continue to enjoy Ben & Jerry’s with a good conscience.  Please don’t disappoint us. Ben & Jerry’s, we ask you to maintain our confidence in your forward-thinking company by using this as an opportunity to educate the public about the problem of hazing and to move quickly to find a new name for your hazelnut ice cream.  We would gladly offer you our assistance in making these adjustments and informing your consumers.

After the complaints, the company condemned hazing and later said it would consider changing the name. The company received 11 complaints, which were mostly e-mails, said Greenwood, the Ben & Jerry’s spokesman.

“The flavor Hazed & Confused and Ben & Jerry’s as a company in no way condone –- nor support in any manner –- the act of hazing or bullying,” the company said in a statement at the time. “Ben & Jerry’s believes that hazing and bullying have no place in our society.”

I love it when liberals find out that they’re insensitive.

But they never do! It’s either someone else’s fault or the poor dolt doesn’t quite get it.

Hazed and Confused has nothing to do with hazing YOU IDIOTS !!!!

It is you MORONS finding a connection where NORMAL people see none.
AAAAARRRRRGGHHHHHHH !!!!!!!!!!

disclaimer: The rant above is directed to the idiots at stophazing.org and anyone in agreement with they moronic view of this issue.
Rest of the world: Don’t take offense.

Politically Correct company forced to bend over because of Political Correctness.

My belief is the monster will eat itself, starting with the tail.

I seem to be correct, so far.

I had to click on “more” to read what on earth the fuss might be about. Good grief. Hazelnuts, “Dazed and Confused,” it’s obvious. It has nothing to do with fraternities or marching bands.

– unless, of course, the hazing or bullying is being done to a Jew or a Christian or a Conservative.

Oddly enough, StopHazing.org is the one doing the bullying in this case. Change your name or else!

yeah, I thought they decided to #BanBossy

I’m a bit hazy and confused on the whole Politically Correct business myself. Is there a lexicon for the absurd?

Matthew McConaughey, on the other hand, I can figure out just fine.

OK they put in a disclaimer about hazing … now I DEMAND one for obviously promoting the drug culture. I’m OFFENDED darnit. ha

Why do companies give these idiots even one ounce of attention? 11 email complaints? All, most likely, from friends of the couple whose kid was killed during a college hazing, who think they are being noble and somehow kind to their friends. Friends, who obviously, haven’t gotten enough therapy to begin to deal with the tragedy of their son’s death, so instead they latch onto a “lets make the world as we see it” campaign and end up being used by whatever fascist group finds them useful.

I wonder what Jimi Hendrix would say about this.

The PC crowd should feel honored to have an ice cream named after them!

I love it when the circular firing squads form on their side for a change.

““Dazed and Confused” was also an early nineties movie that gave us Matthew McConaughey, and is therefore one of the best movies in existence.”

I won’t argue that.

My Dad died of Cancer, so I demand that all people born between June 22 and July 23 find another astrological sign!

I mean….. have you ever heard of two more obviously “white” names than Ben and Jerry? Talk about a dog whistle for clan racism. Notice they did not name their company Travon and Latasha’s” or “Julio and Juan’s”.

They need to rename the whole company to make it more inclusive and sounds more like America. Racists!

And while they’re at it, they should open their HR records to the Revrhund Jacksuhn’s Rainbow-Push-Coalition…. I suspect they have too few people of color in their ranks.

Let the progs feast upon themselves for a change.

Next weather reporters will need to change their reports of “haze”. For places like LA or Beijing, this could eliminate every weather report 🙂

Their flavor “Cherry Garcia” is named after Grateful Dead guitarist Jerry Garcia. When he passed away in 1995, there were calls to rename the flavor “Berry Jerry.”