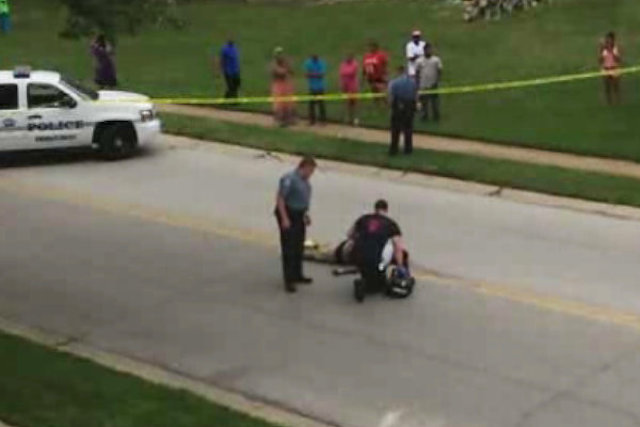 We have reported extensively on the ongoing tension in Ferguson, Missouri following the shooting death of teenager Michael Brown. Most recently, it was revealed that the shooting was not an act of random racial violence, but a likely act of self-defense.

That hasn’t stopped the NGOs from marching in with their reports, though.

A recent report from Amnesty International accuses members of the Ferguson police department of committing human rights abuses as they attempted to control protests in the wake of the shooting.

The Amnesty International report said law enforcement officers should be investigated by U.S. authorities for the abuses, which occurred during weeks of racially charged protests that erupted after white Ferguson police officer Darren Wilson shot and killed Michael Brown, 18, on Aug. 9.

The use by law enforcement of rubber bullets, tear gas and heavy military equipment and restrictions placed on peaceful protesters all violated international standards, the group said.

Amnesty said it sent a delegation to Ferguson from Aug. 14-22 to monitor the situation.

The report also criticizes a Missouri law that the group said may be unconstitutional because it allows police to use deadly force against someone even if there is no imminent threat of harm.

“Lethal force is only to be used to protect life when there is an immediate threat,” Ward said. “The Missouri statute goes far beyond that. It is of grave concern.”

This is nothing new. The global governance sect has a long history of using “international standards” to strongarm local and/or national governments into ceding their sovereignty to the whims of a constantly changing global order.

Amnesty International is, of course, free to submit 100 reports on what its investigators think happened in Ferguson. The problem with allowing these reports any real force or authority, however, is that the premise behind what NGOs like Amnesty do is anti-sovereignty and pro-collectivist; they don’t seek to “fix broken systems.” What they want is for sovereign entities to model their governing behavior on international standards that are either developed or highly influenced by, who? Worldwide NGOs and international “governing” bodies.

The biggest issue with the recently-released AI report is the fact that it ignores recent autopsy evidence showing that Brown likely had his hand on Officer Wilson’s gun during the altercation.

Amnesty cited a Missouri statute that says a police officer may use deadly force “in effecting an arrest or in preventing an escape from custody” when that officer “reasonably believes that such use of deadly force is immediately necessary to effect the arrest and also reasonably believes that the person to be arrested … has committed or attempted to commit a felony.”

Witnesses and law enforcement officials have said Brown and Wilson got into an altercation after Wilson told Brown to stop walking down the middle of a street. Wilson shot Brown six times. Some witnesses have said Brown had his hands up in surrender when the last shots were fired.

“Michael Brown was unarmed and thus unlikely to have presented a serious threat to the life of the police officer,” the report said.

I’m sure it was just a typo.

Global governance depends on both governments and the people accepting the premise that unless a governing body submits to international standards, human rights are being violated; that it is not a possibility, but a certainty that discrimination and abuse exists in a world absent the implementation of transnational legal standards.

If U.S. authorities nod to the whims of NGOs like Amnesty International, I can guarantee that months or years from now, the goal posts will move. That’s the problem with looking to standards that constantly evolve based on the latest critical theory law review article: you become beholden to a system that neither respects nor recognizes your authority to govern.

Well, autopsy reports are full of hard, objective evidence, which is very difficult to spin. We simply can’t use them.

The first step to being taken seriously is to clearly state the basis of your opinion, and for that basis to align with empirical evidence. If I were the person responsible for AI, I would insist upon rigorous standards, and any employee failing to live up to those standards intentionally would be terminated. That is the minimum require for credibility. The fact that this “investigation” was published without critical review is evidence of AI’s essential non-seriousness.

AND I question the freaking timing of this.

Is AI TRYING to stir the pot? Or is it just a callous fundraising ploy?

Both? Also, you forgot ‘for their personal entertainment’. That seems to underlie a lot of what they do.

Hey, a false, cheap sense of moral superiority is alllllll a lot of people have.

Forcing minority citizens to drive to Fergeson and loot the stores was a clear violation of their human rights!

See, that’s the problem in a nutshell. Amnesty International doesn’t care about pesky things like facts that get in the way of their Progressive-Collectivist mindset. If you don’t agree with them, you’re obviously a racist, bigot, homophobe, rich, beneficiary of white-privilege who simply couldn’t possibly understand that the underlying causes of the violence inflicted, which is itself a cry for ‘social justice’ ( read “equal outcomes” regardless of individual unequal effort or talent).

I’ve found the most satisfying way to respond to that is to thank the accuser for calling me ( insert category here). It causes me to evaluate my assumptions in light of how others view me, and having done so, my conclusions still stand. Now would they care to address my criticisms, or would they like to continue to call me bad names and show themselves to be intellectually bankrupt?

“The use by law enforcement of rubber bullets, tear gas and heavy military equipment and restrictions placed on peaceful protesters all violated international standards, the group said.”

Are they in major “rolling-cat-fit” about Hong Kong?

So, rags, I’m guessing you’re off their donation A-list.

I got a “contribution” for them.

Remember the “mooning” sequence from “Braveheart”…???

LOL, you thought of mooning and I though of my box of low recoil shells with rubber pellets, lol.

“international standards” are subordinate to federal & state laws here in the US.

Not to be picky but there wouldn’t be much of a challenge if the pastry was merely rotating. The rotation must be accompanied by continuing linear dynamic relocation.

I have heard it expressed as “It is time for them to perform an aeronautical procreational act at a perambulating piece of perforated pastry!”

To be clear, there were human rights violations of the Ferguson businesses and many members of the police force, notably Officer Wilson.

Yea, what do you want to bet they didn’t even attempt to look at it from that angle?

You won’t get any takers for THAT bet, Grem! Yeesh! Of course they didn’t consider that they’ve got the victims reversed, according to the evidence. It’s NOT what they DO. It’s not their agenda.

All of AI is currently needed in Syria and Iraq to enforce International standards. When, if, they finish there I can provide a long secondary list of countries.

Do you really think these collectivist cowards would go where there is real danger? No they take the pot-shots from a safe distance.

Americans had a history of standing firm against tyranny. The indolent dilatants of AI will always let real men do the real work as they pompously wax philosophical from a safe distance.

Metro girly-men. They’d let their wives, daughters, etc., get raped and beaten to death before they’d move a (probably non-existent) muscle. Scared of their own shadows. Pontificating pansies.

“Peaceful”. Yeah like the bunch that burned down a quickmart and looted to the point where store owners show up with guns.
Or the people that took over the protests, like this guy:
http://fox2now.com/2014/10/23/one-mans-protests-push-police-to-the-limit/

An enraged person who has already attacked you and attempted to take your firearm IS a deadly threat. If he’s 25 feet away and moving towards you, he can close the gap in 2 seconds. You’re under no legal or moral obligation to allow him to start beating the crap out of you or attempt to take your firearm before you neutralize that threat. Amnesty International can take their standards and shove them.

There is also very credible evidence that Brown had committed a felony just a very few minutes before.

Latest I heard was that police officers in Ferguson were stoning women who commit adultery. No…. wait. That was somewhere else. Oh, now I remember…. they were beheading Christians. ??…. oh…. that was somewhere else too. Yeah, I got it now, they were changing their bullet proof vests for explosive vests and blowing up shopping centers.

I have to find a different source of news other than the American media.

Did Saul Alinsky say anything about keeping your opposition on the defensive?

Why not expose Amnesty International for he fraud it is?

We let the corrupt and the racists set the agenda.

How about those humans who owned the businesses that were looted by all the “protesting” thugs — do they have any “human rights” not to have their businesses trashed, their property stolen, and their lives and livelihoods threatened by hostile, thieving mobs?

What say you, Amnesty International?

AI goes after the minor problems in the US because we won’t stone, behead or crucify them.

AI, and Holder, needs to investigate the black fascist antisemitic thugs who drove CNN out of Ferguson in violation of the first amendment.

Yea, like they investigated the NBP’s for voter intimidation, lol.

I have a personal message for Amnesty International. “Please take your ‘international standards’ and shove them sideways up your butt with a corkscrew motion.’ Yep, that pretty much sums up my feelings.

I initially read this as “where was Al (Sharpton)”. Senior moment I suppose, but still a valid question.

“Michael Brown was unarmed and thus unlikely to have presented a serious threat to the life of the police officer,” the report said.

Nice conclusion in a report that is simply an intellectual exercise. I would like to introduce these people to some of the “unarmed” people I had to deal with as a beat cop. I’ve seen guys the size of Brown kill people with one punch.

And they need to meet these people on a dark street when they are on their “best” behavior.

They will change their tune very, very, very quickly.

AI is living in a fantasy world.

No they wouldn’t change their tune. I have seen it happen over and over. For whatever reason the real world is just to difficult for these people. One of these folks who is faced with stark reality convinces themselves that what they encountered is an anomaly and will return right back to their previous patterns and/or become more extreme in their thinking.

OK. Tell me again who is investigating the lawlessness of the lynch mob that continues to riot, intimidates the grand jury with a verdict ultimatum, loots and other wise inflicts their AG silently sanctioned and perverted version of civil rights onto others?

There would be no police action EXCEPT for the actions of Brown, Johnson and the community destroyers.

Amnesty International should be investigating lawless mobs and kanagroo courts.

Yea, AI is worried about a trumped up “racial” event when ISIS is beheading people on the internet like once a week.

AI does not care about investigating anything. AI’s goal is to put the police, conservatives, etc. on the defensive. And maybe make some money. Facts mean nothing. The end justifies the means. They use fabricated moral assertions as cover for their destructive agenda.