Only in Rhode Island 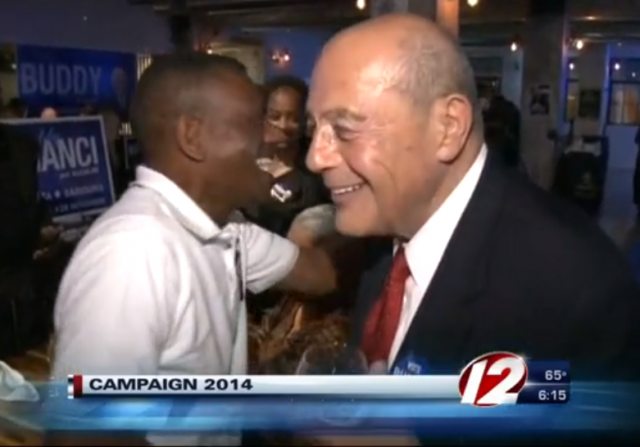 You may not fully appreciate this unless you are from my former home State of Rhode Island and Providence Plantations.

As mentioned here before, twice-convicted former Providence Mayor Vincent “Buddy” Cianci not only is running for Mayor a third time (as an Independent), he is leading in the polls. Buddy’s first conviction during his first term as Mayor was for beating his wife’s alleged paramour with a fireplace log and assaulting him with a lit cigarette. His second conviction was for running a criminal enterprise (under the RICO statute), namely, Providence City Hall.

Mike Stanton, author of the definitive chronicle of Buddy’s years in office (The Prince of Providence book and later movie), has a column in The New York Times this weekend, Good Buddy, Bad Buddy:

Stories of the Good Buddy and the Bad Buddy are legion, and legend. He moved rivers. He took bribes. He built a mall. He was accused of raping a woman at gunpoint in law school. He championed WaterFire, the festive floating bonfires on downtown rivers. He assaulted a guy and tried to jab a lit cigarette in his eye while a police bodyguard stood by. He raised a city’s self-esteem. He turned City Hall into a cesspool. The judge who sentenced him to five years in prison, for running City Hall as a criminal enterprise, called him Dr. Jekyll and Mr. Hyde. (The ever witty Buddy cracked, “He didn’t give me two [expletive] paychecks.”)

He belongs to that great American pantheon of rogues whose corruption was tolerated because of their populist appeal to voters and the perception that they “got things done” — Boss Tweed, Huey Long, James Michael Curley, Edwin Edwards…. A city is like a woman you make love to, he once said. But he was an unfaithful lover.

Yet Buddy remains a beloved figure because he was larger than life, a superb retail politician, and the man who transformed Providence from a dying industrial city into the jewel of New England.

It’s not surprising that Buddy not only has strong support, but also Buddy also has a huge cash-on-hand lead over his opponents, the Providence Journal reports:

Big money is flowing into the campaigns for the three candidates vying to succeed Angel Taveras as the next mayor of Providence.

Campaign finance records filed on Tuesday and Wednesday with the state Board of Elections show that Vincent A. “Buddy” Cianci Jr., the twice-convicted felon who is trying to return to the office he held for nearly 22 years, has raised $675,431.40 since he declared his candidacy and has $301,539.68 left, according to his latest campaign finance report….

The part of the ProJo story that is so, so, so classic Rhode Island is the discussion of $1,000 donors to Cianci’s campaign:

His son is an executive vice president at Churchill & Banks Companies LLC. The firm is also under federal indictment in the North Providence scandal for conspiracy to commit offenses against the United States. The younger Baccari is not charged with any crimes.

Almost makes me want to move back, for the entertainment. Almost.

It’s not only Rhode Island. It works in Louisiana, too. And then there’s former Texas governor Ma Ferguson who ran and was elected essentially as a surrogate for corrupt Pa Ferguson.

OK, I make absolutely no claim the politics of the South and West east of the Mexican state of Alta California are honest; especially I am not defending the Republican politics in Mississippi.

But as corrupt as they are, they are put in the shadows by long-time Democrat regimes. If everything in the East and north of the Mason-Dixon line disappeared, I would not be discommoded.

Professor, why not just get it over with and move to New Joisey?

Then there is Colorado

“In 2013, a new Democratic state legislature rammed through a sweeping and highly controversial election law and convinced Democratic governor John Hickenlooper to sign it. The law, known as House Bill 1303, makes Colorado the only state in the country to combine two radical changes in election law: 1) abolishing the traditional polling place and having every voter mailed a ballot and 2) establishing same-day registration, which allows someone to appear at a government office and register and vote on the same day without showing photo ID or any other verifiable evidence that establishes identity. If they register online a few days before, no human being ever has to show up to register or vote. A few keystrokes can create a voter and a “valid” ballot. ​Once a ballot cast under same-day registration is mixed in with others, there is no way to separate it out if the person who voted is later found ineligible.”

“Minnesota Majority scoured the 2008 election results and identified 1,099 felons who had voted illegally. Even though violators must essentially admit their crime before they can be charged, prosecutors managed to secure 177 convictions of fraud by felons. Such numbers matter — in 2008, Al Franken won his disputed Senate race by only 312 votes, and a local TV station found that nine out of ten illegal felon voters in that race said they had cast ballots for Franken.”

I, too, am a native of Little Groady. I actually met Buddy once and shook his hand (he was on a campaign stump in the 80s and showed up at my work). Buddy is a winner and enjoys support because he does “get things done.” The people of Providence understand that all politicians in their city (and most in the state) are corrupt. If your mayor is going to be corrupt, at least he should be effective too. This is where Buddy shines.

I am now in Washington State. When my then-wife and I moved here more than 20 years ago, we laughed at what passed for corruption here. (There was actually a case of a state worker who had been fired for not showing up at his job. He sued and argued that showing up for work was not in his job description. He won!) And road construction completed on time and under budget! Unheard of in RI.

BTW, William, just came across this site last night. As a native of the Ocean State, you may find this of interest (as may other followers of LI):
http://caught.net/

I recall that Buddy threatened the man who was dating his ex-wife. Continue seeing her and “you’ll be dead. D-E-D, dead.”