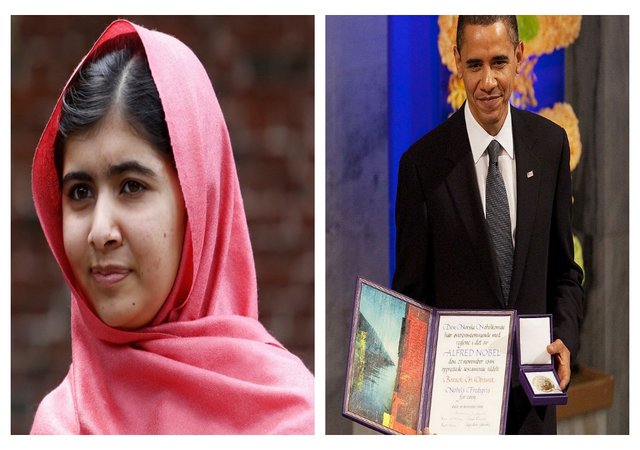 This year, we have two deserving Nobel Peace Prize winners, each of whom has an inspiring story of fighting against great odds for the humanity of others, and suffering great pain in the process.

They are the people we imagine when we think of the Nobel Peace Prize in our mind’s eye. Even if that mind’s eye doesn’t always meet reality.

Amy Davidson in The New Yorker has brief backgrounds on this year’s winners:

Malala Yousafzai, who is seventeen years old, and Kailash Satyarthi, who is sixty, were awarded the Nobel Peace Prize on Friday morning—for, in the committee’s words, “their struggle against the suppression of children and young people and for the right of all children to education.”

Satyarthi, who is Indian, is a man who has fought for children for decades; Malala, who is Pakistani, is a child, and a fighter herself.

There was some thought, ahead of the announcement, that Malala, as she is known, would be awarded the prize alone. She is more famous than Satyarthi. Two years ago, gunmen from the Taliban got on her school bus and shot her in the head, shattering her skull—an attack she answered by becoming one of the world’s clearest voices for girls’ education.

Satyarthi has survived physical attacks, too, and has led raids on factories that hold small children as bonded laborers…. ccording to press reports, he has worked directly with more than eighty thousand children, and has fought to change the conditions and chances of hundreds of thousands more.

And then there’s this:

…. Only very rarely has a person to the same extent as Obama captured the world’s attention and given its people hope for a better future. His diplomacy is founded in the concept that those who are to lead the world must do so on the basis of values and attitudes that are shared by the majority of the world’s population.

For 108 years, the Norwegian Nobel Committee has sought to stimulate precisely that international policy and those attitudes for which Obama is now the world’s leading spokesman. The Committee endorses Obama’s appeal that “Now is the time for all of us to take our share of responsibility for a global response to global challenges.”

Note that Satyarthi “fought for children for decades,” while Obama was nominated for the prize within nine days of taking office.

But I still can’t get over the fact that Barack Obama got the same award for his non-accomplishments.
I can’t find it in my heart to feel any respect towards the Nobel Prize institution after that.

Yep, John (“Give Peace a Chance”) Lennon did more to deserve the Nobel Peace Prize than Barry (“I’m really good at killing people”) Obama did.

The Nobel Peace Prize is a pathetic joke now, which is too bad for these two courageous young ladies, who actually did something worthy of a prize (unlike Obama).

The entire No-ball Committee is a joke and in my opinion is no different from an Obama Democrat politician!

You’ve got to wonder in their heart-of-hearts, if the 0bama Nobel voters truly regret their big mistake.

If they did, they would come clean and forward about it.

In 2009 I read an investigative report stating that Norway was up for some BIG U.S. BUCKS (100’s of Millions of Dollars) from some U.S. AID package that year. The reporters felt that strongly influenced the No-Ball Committee.

Quick, name the second and third place finishers in each category. I admit never having heard of Satyarthi before, while I vaguely recall when Yousafzai was in the news after being shot in the head by the Taliban.

These choices seem fine to me, but who knows how often the more deserving are overlooked in favor of candidates who better fit the agenda? How many know ‘the field’, like one might know a ball team roster and stats? All I know for sure is that some very worthy person got screwed the year Obama won.

a president of the us should lead on the basis of the values and attitudes of the US.
NOT the rest of the world.

He probably nominated himself.

I think you are right!

Malala is a brave young lady. We need more people like her in this world.

The One just got his award for simply showing up. It’s like what my mother would say whenever we were out for a drive around town and a driver would behave stupidly before us, “This one got the driver’s license just for acting pretty!”