50 years ago today: Ronald Reagan, A Time for Choosing

50 years ago today: Ronald Reagan, A Time for Choosing

Some messages never go out of style 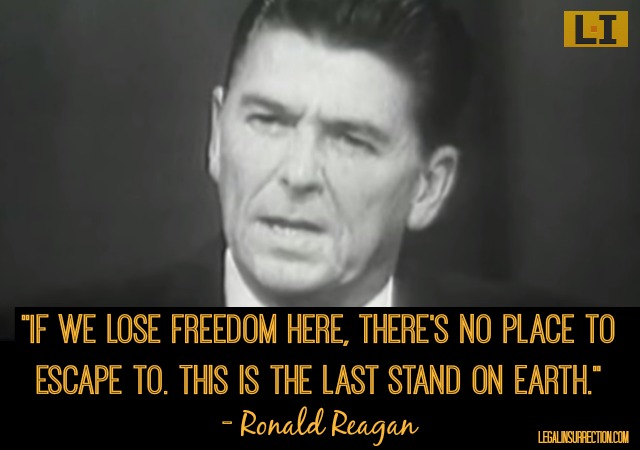 Several years ago I realized I wasn’t the bleeding heart liberal I fancied myself. This realization wasn’t marked by any one salient incident, but was a process. Along the road to Conservatism, I began consuming as much ideological history as I could get my hands on. Even today, one of my favorite Conservative hallmarks is Reagan’s A Time for Choosing speech.

Fifty years old today, Democratic convert Reagan gave what’s probably the best stump speech I’ve ever heard. That stump speech was televised in 1964 and was endorsing Barry Goldwater’s Presidential run. Not only was it a great speech, A Time for Choosing is one of those rare messages that remains timeless:

“This idea that government is beholden to the people, that it has no other source of power except the sovereign people is still the newest and most unique idea in all the long history of man’s relationship to man. This is the issue of this election. Whether we believe in our capacity for self-government or whether we abandon the American revolution and confess that a little intellectual elite in a far distant capital can plan our lives for us better than we can plan them ourselves.

You and I are told increasingly we have to chose between a left or a right. I’d like to suggest there is no such thing as a left or a right. There’s only an up or down. Man’s old age dream, the ultimate in individual freedom consistent with law and order or down to the ant heap of totalitarianism. Regardless of their sincerity, their humanitarian motives, those who would trade our freedom for security, have embarked on this downward course.”

You can watch the speech in it’s entirety beneath.

As we move into the 2014 election, what will you choose?

I had the privilege of voting for Barry Goldwater as Senator from the great state of Arizona.

Sadly, I know too the shame that I voted for his replacement who is someone with the backbone of a maverick octopus. Always sucking up and sticking his tentacles into places they don’t belong.

That didn’t come out quite right.

Yet, even were it to be a typographical error, it came out to be accurate and correct!

Yeah, that stood out for me, too 🙂

If America is where conscientious people make their last stand, then we are losing ground quickly. With progress, the moral standard or religion is notably libertine and selective. There is a creation of moral hazards through selective normalization of dysfunctional behaviors, the social order is dysfunctional, and the authoritarian order is corrupt and progressive. Our society practices human sacrifice as a fundamental right justified by conflation of science and a fraudulent faith. The prerequisite for liberty is men and women capable of self-moderating, responsible (i.e. moral) behavior. That said, good luck to conscientious people.

Thank you Kemberlee. I needed that.

Amazing how little would have to be updated, to make that speech just as relevant today.

I just wish we had another Ronald Reagan to deliver it.

My thoughts exactly, but troubling to think maybe we’ve only slowed the tide. But its probably a fight that never ends.

We’d all like to think that freedom is a natural state.

It isn’t. The resting state of humanity is one form of tyranny or another.

The woods are always pressing on the clearing, the jungle is always trying to take back the fields.

Considering that it took another 16 years or so to actually make the right choice for POTUS, I’d say the speech was way ahead of its time. I’d mention that Nixon did some good things but at best he was a mixed bag. He sure was no Reagan.