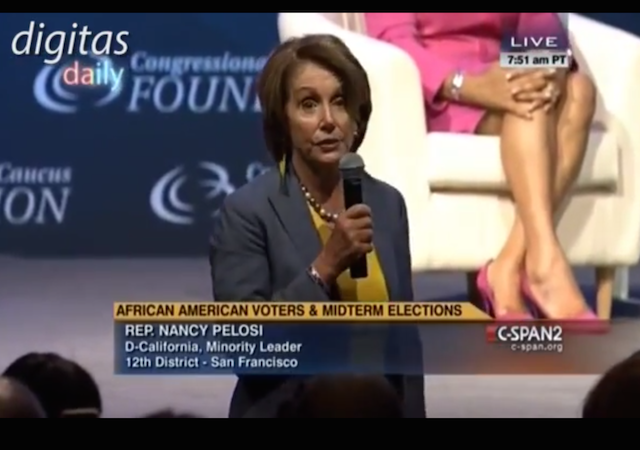 Earlier today, sources in Washington announced that Eric Holder will resign his post as Attorney General. We reported in our breaking news update that Holder’s wish is to be remembered by history as a civil rights hero, and it looks as though he may get his wish—at least when it comes to some members of Congress:

Moments after the NPR story broke, Nancy Pelosi confirmed the report to a meeting of the Congressional Black Caucus, eliciting outcries of dismay from those in attendance and protestations like “that is so bad” and “that is a shock.”

Check out the video here, via Caleb Howe and the folks behind Digitas Daily:

I didn’t know Pelosi was black. I guess it’s all that work she’s had done.

That video clip is like seeing a Dixiecrat gathering getting the news that Bull Connor was resigning from his position with the Deemocrat party.

A bunch of racists getting the news that one of their champions was stepping down.

Pelosi – Bless her, she is always good for COMIC relief.

I wish Lowell Thomas was still alive …. to tell us “the rest of the story”.

Nope. That would be Paul…

You are absolutely correct. What was I thinking? I must have been SO EXCITED to mix them up … my apologies.