US working with Iran (but not Syria) in ISIS fight

US working with Iran (but not Syria) in ISIS fight 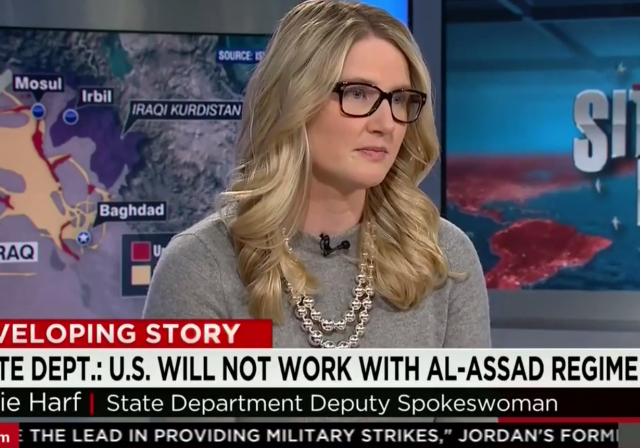 Our friends over at National Review pulled this little gem. We’ve officially entered foreign policy bizarro world when the Department of State is absolutely refusing to work with Syria, but is open to working with Iran to fight (however they’re defining that) ISIS.

Blitzer asked Department of State Spokesperson Marie Harf if Syria was receiving intelligence through a third party, to which she responded, “Not at all. I can categorically reject that. We will not work with the Assad regime, we will not share intelligence with them, we will not coordinate with them. Period. Full stop. I don’t want to be any clearer than that.”

Pretty clear. Not so clear is the conversation about Iran.

When asked if we would be willing to coordinate with Iran, based on what Secretary Kerry has suggested, Harf said:

“We’re open to conversations with them [Iran]. We’ve already had a few on the sidelines of the nuclear negotiations we’ve had a few months ago in Vienna where we talked to them about Iraq because they know ISIL posses a threat to them as well. So we’re open to having that conversation; we won’t be coordinating with them either. They certainly have a role to play here if they can support the new inclusive government in Iraq… that’s really what all the regional players need to do.”

Ok, then. Iran, we can work with, but Syria is completely and totally out of the question. Good to know.

Next we’ll hear that the State Dept is working with ISIS, seeking their assistance in halting Iran’s nuclear program.

What makes the Irani government different from the Syrian government or from the wild card ISIL?

Only the coordinates we need to blast them to virginland.

MEOWRRRR. Henry, you are such a bitch.

Undoubtedly, but also sexual beauty and beguilement, with the long hair, loose sweater, over-sized balls necklace. She also is more declamatory (bitchy) than Psaki, which enhances the sexual mien and attractiveness for a certain not inconsiderable audience. Altogether fully loaded. Kerry must love her.

Every time I see her my initial reaction is that it MUST be a SNL skit. In an administration chock full of inept and unqualified weasels, this one takes the cake.

What makes the Irani government different from the Syrian government or from the wild card ISIL?

ISIL is a strict, militant, Sunni organization. They can be viewed as attempting in Iraq to reinstitute Sunni rule over the Shia (plus Kurdish) majority. They seem to be attacking Shia, Christians, and Sunni Kurds with equal intensity (and would probably include Jews, if there were any left there).

How do we help the Iraqi Shia and Kurds? Obama pulled all of our ground troops out. And, seems completely incapable of building a coalition to fight ISIL. I think that the answer is to encourage Iran to supply the troops to bolster the Iraqi military. They are the one country that seems willing to supply the level of troops necessary to make a difference.

When do you leave to make that happen?

I believe that Barry has done it now!

Psaki and Harf are better suited to a “Romy and Michelle’s High School Reunion” remake than they are the State Dept.

Once I went to our elementary school to pick up one of my kids for a dental appt. I entered and headed for the office but was intercepted and braced by a spunky 8 year old hall monitor and she was taking my unauthorized presence very seriously indeed. So serious, and so dedicated, and so unintentionally cute. Psaki and Harf remind me of her. Cute little pretender wannabe adults.

The two Heathers. Or Brittany(s).

Syria is a gateway for oil to Europe.