Neel Kashkari took it to Brown in the one and only debate, but that likely will not change the outcome. 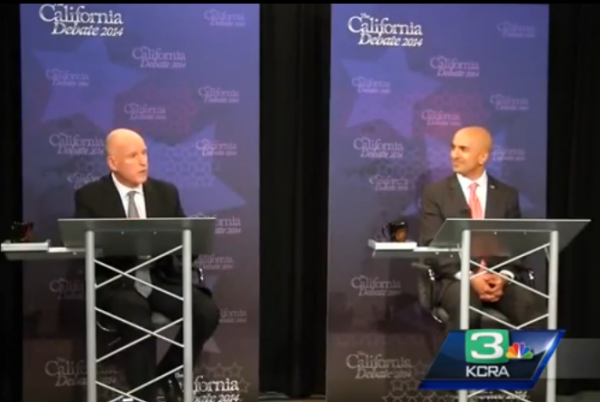 As I noted in my June election report, Governor Jerry Brown will be facing Republican challenger Neel Kashkari in California’s gubernatorial race.

There one and only debate between them was held Thursday. Prior to the event, conservatives in California were wondering if, given the fact Brown holds a tremendous lead in the polls, Kashkari would decide to throw caution to the win and aggressively attack Brown’s recent record in office.

After a slow start, it appears that the answer was yes:

Gov. Jerry Brown’s long-shot Republican challenger blasted him for failing to do enough to land a Tesla battery plant Thursday during the only scheduled debate of this year’s governor’s race, a testy, hour-long exchange.

It appears that was a winning approach, as word of Kashkari’s excellent performance spread through the world of social media on Friday.

The fact that the Republican candidate for governor appeared as a trending news item on the massive social media site, which touts a worldwide scope and range of 1.3 billion users, served as a testament to Kashkari’s successful performance as he delivered strong comebacks to Jerry Brown’s jabs and low blows:

However, perhaps the most intriguing part of the discourse was what Brown may have revealed about his future plans.

In Thursday night’s debate between Gov. Jerry Brown and Neel Kashkari, the candidates sounded pretty scripted until Brown was asked about California’s ability to deal with its huge pension shortfalls.

Brown depicted that as an absurd question for a wealthy state with a proud history and vast resources. “Are we in Arkansas or Mississippi? This is the eighth-largest economy in the world,” he declared.

…Jerry has had bad blood with the most famous Arkansan of our time since early 1992. That is when, during a Democratic presidential candidate debate, he alleged that Gov. Bill Clinton had funneled state money to the Little Rock law firm of his wife, Hillary Clinton. Bill Clinton was, er, peeved. Here’s a link to a great short clip in which Bill tells Jerry off.

In Thursday night’s debate, Brown could have made his haughty point a number of ways.

Given the weak start of Hillary Clinton’s presumed 2016 presidential campaign, I sense Brown is planning to challenge the “presumed nominee” status.

However, loss of the Tesla plant has really hurt Brown’s attempt to paint himself as a “business friendly Democrat”…especially since the records related to that deal aren’t being made public.

The state’s public records could verify the governor’s alleged claim that the reason California lost the multibillion dollar deal with the automaker to Arizona is because “Tesla wanted a massive upfront cash payment that I don’t think would be fair to the taxpayers of California.”

While do not expect any grand surprise in California’s November election results, the finally tally may be far closer that anyone can imagine. And, I think Kashkari shows how some good strategy for conservative nominees in 2016 elections.

I also suspect Brown’s team is happy the interactions were limited to one debate.

I plan to vote for the bald guy.

And a working southern border…

Actually an eastern border would keep many Californians in California so they don’t spread Californibola beyond the Sierra Nevada. Quarantine them.

i liked most of what kashkari had to say but those CrAzY eYeS of his kinda freak me out.

At the founding of America there were families who thought they’d reign like a monarchy.

And, even today we have a few families who feel entitled to the White House. (Mitt Romney tried to break into this circle. But failed.)

There are the Bush’s. And, the Rockefeller’s. And, yes, the Brown’s. Moonbeam had thought he’d make a run for the democratic nomination … But not only Gore stood in his way … But Hillary Clinton’s stuck her foot out to trip up ole Moonbeam.

You know, the early Adams family had quite a run. Until John Quincy Adams stole Andrew Jackson’s first win. And, then? Couldn’t get himself re-elected.

first off, the majority of the population is going to vote Moonbeam, just because he’s a Demonrat.

any chance you had to run a stealth campaign on the right died the day the Beltway RINO announced he was a gun control supporter.

AMF pendejo: i’ll vote for you sometime after the 12th of never. better the out and out criminal than the traitor.

I live in MD and the guy who oversaw the failure of the state Obamacare exchange won the primary to be the Democrat nominee for governor so he will probably be the next one to hold that office. If CA is not any different then why should the results of bad governing matter to the Democrats?

Size of the CA economy under the Dems….
http://econpost.com/californiaeconomy/california-economy-ranking-among-world-economies
“for a couple of years in 1984 and 1985, California was the 5th largest economy in the world.”
Then for some time, it “has ranked 7th biggest world economy”
and more recently “According to U.S. Department of Commerce estimates… the world’s eighth largest economy in 2009.”
For 2012 this post lists CA as 10th, smaller than Russia and Italy.
http://www.startribune.com/blogs/244326311.html