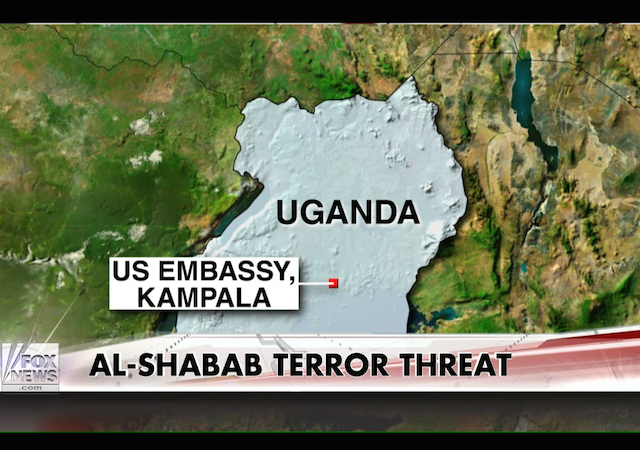 Ugandan authorities on Saturday foiled an attempted terrorist attack in the Ugandan capital city of Kampala.

The U.S. Embassy ordered American citizens to shelter in place as Ugandan police apprehended members of a terror cell, arresting an unspecified number of foreigners and seizing an unknown amount of explosives.

Fred Enanga, a representative from the Uganda Police told the Wall Street Journal that until the investigation is over, police will increase security in public places such as hotels, restaurants, and Entebee National Airport. However, he declined to confirm whether or not the authorities had confirmed that the cell was associated with al Shabaab, and would not divulge the nationalities of the suspects in custody.

Uganda is one of several African Union nations that is supplying manpower for the peacekeeping force fighting al Shabaab in Somalia. Uganda represents the largest presence in the force, and has suffered numerous threats and attacks since it joined. Most notably, al Shabaab took responsibility for the 2010 attack on the World Cup finals in Kampala, when two explosions took the lives of 76 people.

The U.S. Embassy is providing continual updates via their website, and is continuing to assess the continuing threat of terrorist activity in Uganda:

Overnight the Embassy has continued to track developments related to the al-Shabaab terrorist plot and to coordinate with Ugandan authorities. We are updating our assessment of the security situation. Although all government actions have moved forward effectively and, to this point, without violence, we believe it is prudent for all U.S. citizens to continue to shelter-in-place until we are able to reassess the risk of citizens inadvertently being caught up in operational activity. We will provide a further update no later than midday, Sunday, September 14th.

what kind of idiot do you have to be to willingly be in Africa these days?

between Al-Q, Ebola and their home grown tribal psychotics, it’s a good place to avoid, if you like being alive.