Reid needed 60 votes to end the measure, but the votes fell 54-42 across the party line.

Earlier this week, more than 20 Republicans voted with Democrats in a 79-18 vote to advance the amendment in order to force Democrats to spend the week debating the merits of the measure.
…
The amendment was certain to fail at some point. It would have needed to win two-thirds support to pass the Senate, and then would still have needed to move through the House and be ratified by two-thirds of the states.

Preceeding the vote, Minority Leader Mitch McConnell (R-KY) took Democrats to task for wasting the chamber’s time, and prioritizing Democrats’ own destructive agenda over the needs of the American people:

“Given the urgency of this situation, I have to say it’s a little disconcerting to see the Democrat-led Senate focusing on things like reducing free speech protections for the American people. At a time when the rest of the country is worried about the threat of ISIL. At a time when millions wonder how they’re ever going to find a job in this awful economy. At a time when we find out that crushing federal regulations have gotten so out of control that they now cost our economy more than $2 trillion a year. This is what they chose to make their top legislative priority this week. Taking an eraser to the First Amendment. And now they plan to devote almost all the remaining time between now and November to what Democrats like to call ‘messaging bills.’ These are bills designed intentionally to fail so that Democrats can make campaign ads about them failing.

The fact that Reid threw away days of floor debate on the upcoming budget fight to piddle around with a throwaway bill–and now plans on doing the same with several more measures doomed to failure–is proof that he’s worried about maintaining his majority after November.

Senate Democrats commemorated the 13th anniversary of the 9/11 attacks…by voting to repeal the First Amendment. http://t.co/fy0it0BuJK 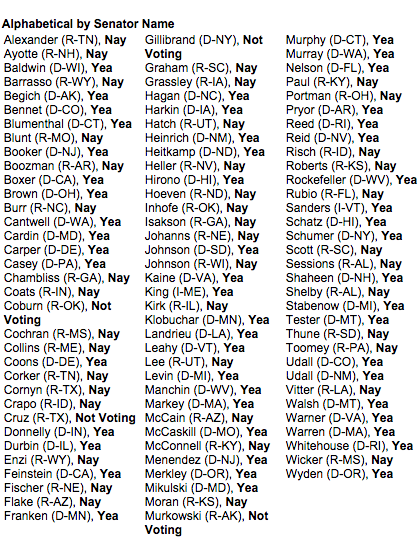 he’s worried about maintaining his majority after November.

May the outcome of November’s election outperform his worst worries by a magnitude of 9 on the Richter scale.

And rest of us must become poll-watchers, to observe the mightiest tsunami of attempted vote fraud in the history of the country. If you thought that Democrat attempts to criminalize sitting Republicans (Rich Perry, Scott Walker et al) by headline-grabbing legal subterfuge were corrupt, just watch them at the polls in November.

The First Amendment…In fact, the entire U.S. Constitution has been hijacked by our Communist president who rules by Executive Orders, so what does this matter?

The United States is already a dictatorship.

The worst part is that other govts, especially state govts (which are sovereign), obey orders and directives that they KNOW are unconstitutional. Each officer of a government takes an oath to uphold the constitution. When they go along with an unconstitutional order/directive, they are violating that oath as if they were the ones who originated it.

Jugears gets away with this until an official refuses to obey. Then it will be like one of those domino displays.

Kay Hagan voted for this again? That surprises me since she’s about to lose her senate seat and has been trying to sound like Jesse Helms lately. It doesn’t surprise me she supports it, only that she’d admit it mid-campaign. Wow. That shit will NOT sit well here in NC. Bad move.

She not only voted for it, she co-sponsored it, and has given public statements in favor of it. Pandering to the “Moral Monday” vote and hoping they go to the polls may be the explanation.

70% of Moral Monday folk were from out of state. Kay going down.

It’s not clear what’s going on here.
Was this a cloture vote?
A final vote on the amendment?

I don’t know either but I hope it was an effort to have Dingy Harry taken downstairs and hung.

I am not sure either but I am assuming it was probably not an effort to get union money out of politics.

If Management money can be in politics, then Union money has just as much a place.

What’s funny is that nobody ever said differently.

Now, the OPPOSITE is true.

I was wondering the same thing. I thought they already passed a cloture motion that limited the debate to 30 hours before a final vote. Can anyone clarify this arcane point of parliamentary procedure?

Reid is not worried about losing the Senate to the GOP. He knows they are part of his Establishment Party (E). Meet the new boss same as the old boss.

What he’s worried about his losing his position as Majority Leader. Its worth a few mil in kickbacks.

“Lorne Michaels [SNL’s creator] could be put in jail under this amendment for making fun of any politician,” Cruz said. “That is extraordinary. It is breathtaking and it is dangerous.” Cruz is arguing that since NBC is a corporation, the amendment would give Congress the authority to ban any political speech doled out by its employees.

I think this was Dingy Harry stalling and diverting attention because “immigration reform” is hanging over their heads while obamullah continues his excuses and false promises to the Latino lobby to do something “by the holidays.”

What Cruz left unsaid is that the prog drones would LOVE to have this legislation pass. They don’t care if it would make SNL, or Bill Maher or anything else illegal, because they know that their Constitution-shredding administration would simply choose not to enforce the law when it is violated by Dims. For example, look at what this administration has done with existing immigration law, or ObamaCare for that matter.

Harry Reid and the Dems have several of these bills ready to go. They know none of them have a hope of passing. The idea was to take the certain GOP vote-downs and make midterm political hay out them in campaign ads across the country, you know, “GOP obstructionism!” “GOP hates _____!” They were going to introduce them rapid fire, one after another, and make GOP vote them down. But.. lol… with the first one, McConnell (I presume) had enough GOP senators vote for it so it would pass, and event that forces the introducing majority to discuss it in the Senate for a week, thereby busting up Reid’s plans.

This one was voted down when the vote counted, so expect another very soon, one that helps Dems with their base: women, Latinos, blacks, or the young. Then another. Then another. All of them bullshit, all of them political kabuki.

Anyone else having problems voting comments up today? I agree with many of your comments, but have been unable to vote them up.