Scenes from a Marriage (of climate activism, socialism and hypocrisy)

Scenes from a Marriage (of climate activism, socialism and hypocrisy) 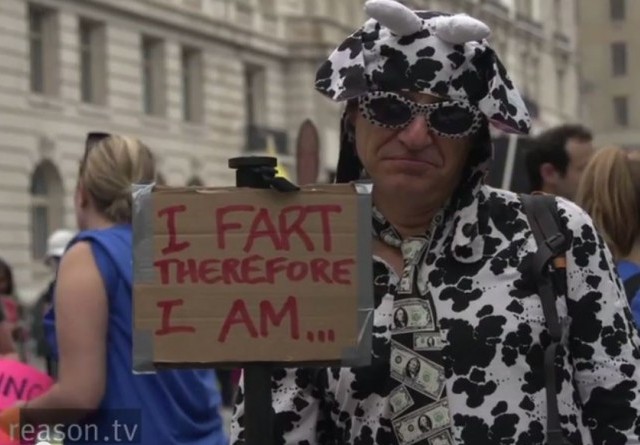 From Reason TV, via Hot Air:

From PJTV, via Instapundit:

Wait a minute I know that guy in the mask and black cloak…that’s Fart Vapors!

Today’s KPBS (yes, really, sister station to KPFK) in San Diego had some embarrassingly out-of-date reportage, about how the massive, worldwide demonstrations yesterday pointed out how the burdens of global warming (they said that) are falling on the poorest and most vulnerable populations.

The 1960s called – they want their hippies back. Saw an awful lot of aging flower children – the movement was pathetic the first time around, and fifty years later it’s only gotten more so ~

And Junior is a joke. (Does he have some disease? What’s with the tremulous voice?) As far as he’s concerned, there’s no need to be the change they wish to implement as long as they can blame the evil Koch brothers, the Tea Party, “Big Oil,” and all the other boogeymen that haunt fevered little fascist minds ~

He and the rest of the crowd seem to be suffering from Psychoceramic Syndrome and Deficatus Cranius as well!

Thanks for the info! Something sounded “off” to me, but I had no idea what it was ~

We were warned in 1957 that rock and roll would lead to precisely this sort of thing, but did we listen? NO.

She just let the guy talk and he let us know how intelligent he is… or not.

Make everybody get electric cars? This guy is an idiot! They’re way too expensive and have far too little utility. Once all the peons are herded into public transportation, as many leftists dream of, the roads will be traffic-free for our betters to drive their electric cars on.

You have to wonder how many of those idiots believe that electric cars are more “planet friendly” because they are rechargeable instead of using those nasty fossil fuels, don’cha know. Never mind that the electricity has to come from somewhere: they don’t like coal, they hate nuclear, natural gas isn’t clean either because FRACKING (probably one of the Four Horsemen of the Apocalypse, it’s so evil) – where do they think it comes from, honestly? Rubbing cats backwards?

The good thing about the protest is that now the mask is fully off. Conservatives have believed for years that Global Warming® wasn’t really about the climate or the environment. It was about control and redistribution. Now the Climate March has confirmed it. As the socialist newspaper headlines said, it’s about “System Change, Not Climate Change”. But for people paying attention, we already knew that. I keep the following post from 2013 bookmarked because it uses UN climate leaders and other world leaders direct quotes:

>> During last year’s climate meeting in Rio de Janeiro, UN climate chief Christiana Figueres said that what the UN intends is “a complete economic transformation of the world.” In 2000, former French President Jacques Chirac called the Kyoto climate treaty “the first component of authentic global governance.” And last year IPCC Working Group III co-chair Ottmar Edenhofer said international climate policy is not about environmental policy; it is about “how we redistribute the world’s wealth.”<<

If they want to have a debate about free enterprise vs socialism, then let's have that debate. But stop the apocalyptic climate fear mongering when that's not what it's all about. We let them lie us into Obamacare. Now they want to lie us into redistributing our wealth to the rest of the world. Hopefully after we're finished mocking their stupid little protest we'll reflect on what's really at stake and how important it is to stop them.

Global Warming is also an apocalyptic doomsday religion. The science is flimsy as far as real scientific data goes, and none of their doomsday claims come to pass.

However, once they do get their centralized command and control structure, they will tell us tales of how horrible the world WOULD have been had the people not sacrificed their liberty, property rights, and prosperity to government and societal aristocrats.

He farts therefore he emits CO2. Perhaps he shouldn’t fart…

Probably all on the public dole.

Re “I’m Robert F.” Kennedy Jr., I’ve met him in small social settings, and I can assure you he’s just as pathetic an excuse for a man in private as he is in public.