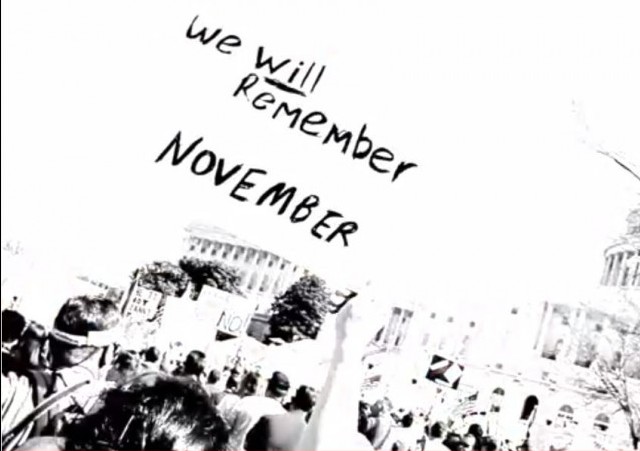 The Politico/GWU Battleground 2014 Poll has been released.

Guy Benson at Hot Air has the details, including a 4 point Republican advantage on the generic ballot. 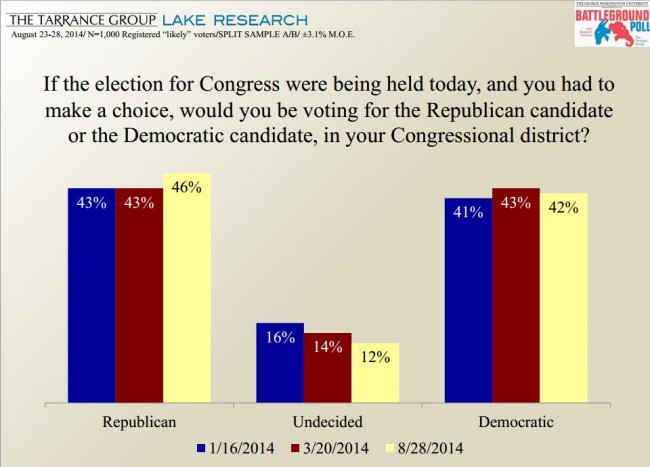 But one particular aspect could be more important than any: Voter intensity, reflective also of a massive 16 point generic ballot lead in states with closely contested Senate elections:

I haven’t seen any Remember November videos in this cycle. Perhaps they’re not needed to motivate Republicans this time around.

It was my understanding that Scott Rasmussen was summoned to the White House earlier this year, after reporting a disapproval rating for Obama of -24, but I can find no link to any story. Does anyone here recall that?

Odd, isn’t it, that with the country and world falling further apart since then Obama’s ratings on Rasmussen have never gone that low.

I tweaked that for you 🙂

That is disappointing. Rasmussen was my “go to” when I wanted to check current polling.

Thank you, SHV. This explains a lot. Rasmussen’s numbers seemed to start veering away from reality right about the time you cite. Today, they simply make no sense. If Barry’s performance was worthy of a -24 six months ago, how can that number not be worse today?

I just deleted my Rasmussen bookmark. No more opening the page in anticipation of -24, only to find them reporting -12.

Those polled likely felt like they were deciding between:

covered by the undecided choice.
you see with no head its impossible to decide.

if the choice is between a demonrat and a RINO from the GOPe, what’s the difference?

me, since i live in #Failifornia, will be voting for the worst choice i’m given, since trying to talk sense to the willfully st00pid is a waste of time.

maybe once it gets painful, they will be more inclined to actually think.

Stopping the cause of their pain is above their paygrades.

Keep in mind that the “whoever holds the gavel holds the power”. Thus, even if you vote for the most conservative Democrat, they will put the gavel in the hands of their leadership, which is always more liberal/progressive.

Democrats learned this lesson in 2000 and applied that in “swing” districts in 2004-2008. This allowed them to get majorities in the House and Senate, and put the gavel in the hands of Pelosi and Reid.

There is an old saying in horse racing: “Never bet on the horse, bet on the jockey.” That is because the good jockeys get the good horses. Remember that person with the gavel is akin to the jockey in this analogy.

I’m supposed to get excited about the party that declared open war on me and mine during the primary season? Not likely.

And I’ll be here for the next primary season, and the next and so on and so forth. I am excited about that…

The fact is Republicans hadn’t overtaken Democrats in the generic congressional ballot by this time in 1994, and that turned out pretty well. And by this time in 2010, we had just pulled even.

Traditionally, even “likely” and “certain” Democratic voters are less likely to show up than Republicans who give similar responses. But then, they are generally undependable people.

Only Obama has been able to excite the lowest-turnout groups, blacks and young people. He’s not on the ballot, and it seems that at least young people are giving up on him now, too. They aren’t running to the GOP, but that’s okay. They don’t really have the experience to make intelligent decisions about public policy. As long as they aren’t blindly voting for Democrats, they serve us better.

Now, if we can only keep the idiots in the Republican party from staying home or voting Democrat out of spite because the Republican candidate on the ballot didn’t satisfy their 200-point purity test…