If true, the inevitability of Democratic Presidential Nominee Hillary Clinton is seriously in doubt 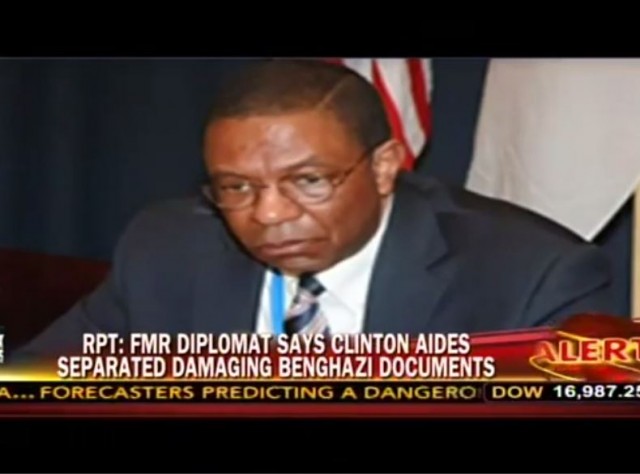 We’ve seen so many Benghazi bombshells to date that have been deep-sixed by the media or flopped (60 Minutes), that I’m skeptical that this new report will damage Hillary.

There will be Clintonesque attacks on the whistleblower and spin of the story as part of a vast right wing conspiracy.

But if it’s true, the inevitability of Hillary is seriously in doubt.

As the House Select Committee on Benghazi prepares for its first hearing this week, a former State Department diplomat is coming forward with a startling allegation: Hillary Clinton confidants were part of an operation to “separate” damaging documents before they were turned over to the Accountability Review Board investigating security lapses surrounding the Sept. 11, 2012, terrorist attacks on the U.S. mission in Benghazi, Libya.

According to former Deputy Assistant Secretary Raymond Maxwell, the after-hours session took place over a weekend in a basement operations-type center at State Department headquarters in Washington, D.C. This is the first time Maxwell has publicly come forward with the story…..

“She told me, ‘Ray, we are to go through these stacks and pull out anything that might put anybody in the [Near Eastern Affairs] front office or the seventh floor in a bad light,’” says Maxwell. He says “seventh floor” was State Department shorthand for then-Secretary of State Clinton and her principal advisors.

“I asked her, ‘But isn’t that unethical?’ She responded, ‘Ray, those are our orders.’ ”

Would Hillary do such a thing? It’s not as if she has a history of cleaning up messes.

“…we are to go through these stacks and pull out anything that might put anybody in the [Near Eastern Affairs] front office or the seventh floor in a bad light,’”

And I believe, by “bad light” they mean prison.

The documents were five classified copies of a single report commissioned from Richard Clarke covering internal assessments of the Clinton Administration’s handling of the unsuccessful 2000 millennium attack plots. ….

The Justice Department initially said Berger stole only copies of classified documents and not originals. But the House Government Reform Committee later revealed that an unsupervised Berger had been given access to classified files of original, uncopied, uninventoried documents on terrorism.

And all he did was a little community service, and later giving up his law license. “By giving up his license, Berger avoided cross-examination by the Bar Counsel regarding details of his thefts.”

He’s a Democrat. You wouldn’t expect him to be held accountable, would you?

This should come as absolutely NO surprise to anybody.

This is typical Clintonian/Obamic behavior. They will expunge anything that they find criminal or politically inconvenient, while vacuuming up anything on other people they can use to hurt them.

Why can’t we sue this witch for all the profits from her lousy book and for all the speaking fees she will ever earn. Make it impossible for her to turn a profit and her partner-in-crime will have to support her like every other husband does (or should do).

Of course if there’s a criminal statute covering her behavior, then she needs to tell her story to a 12 person panel.

Dude, there is not a 2 year statute of limitations on criminal negligence

He’s mocking the statements of an Obama official several months ago. If you haven’t seen it:

Which pretty much encapsulates the entire Obama strategy on literally every scandal from Fast and Furious to the IRS. Deny, obfusticate, delay, hide documents, ‘find’ them months or years later, and finally, after they have delayed for years, call them crazy and laugh at the fact that we’re ‘still talking about this’.

Quite right. And do you know how Tommy Vieter came to become a National Security adviser? He was a limo driver for Obama in the 2008 campaign. That’s his sole qualification.

Ah, but how did he become Obama’s limo driver? Actually, I looked it up. He was a press aide for the Obama for Senate 2004 campaign and worked his way up. Limo driver was just a stepping stone, a job handed to a trusted insider. Keep in mind his job at the NSA was spokesperson. So he’s been a good leftist since university – he’s not just some driver for a limo company who got promoted.

I believe he was withJohn Edwards also . I think these young juicy democrats get handed round like whores . #whoispayingformetonight? Then they get tossed out .

I wonder if this was before or after the “fire” in the State Department.

Isn’t this unethical? The correct Clinton response is “Better put some ice on it”.

Please recall, this guy was thrown under the bus when Benghazi went bad for the administration. He was put on administrative leave (which apparently is the harshest punishment available in the Obama admin), with the implication he was one of the midlevel folks that kept Hillary blind to the problems, damn them. /sarc.

Yep, it was 2 years ago and the Americans that died will be gone much longer. Typical tactic of the Left keep stalling and hope folks forget about it or it goes off the radar. Sounds like the old “bimbo eruption” operation from when Slick Willie was in the WH.

This is a nice preview of the self-serving chicanery, machinations and dishonesty that would inevitably accompagny a Clinton Administration. But, can anyone who has a modicum of familiarity with the record, demeanor and beliefs of this apparatchik truly be surprised at this?

So this guy will probably go to jail, and Hillary will come out clean as a whistle. That’s the way it works, isn’t it?

And she was on a Watergate committee. The country owes Nixon an apology.

It seems to me that if the majority of the public doesn’t “know” about the bombshells, because the liberal media refuses to report about or spins them, then nothing can touch her “inevitability”.

Well except for the fact that she’s a really poor candidate. No charm, no charisma and apt to stick her foot in her mouth nearly as often as Biden. However she is the right gender to be the next Dem “historic” candidate.

It’d be a joy to see that corrupt hag run again — just to see her humiliated.