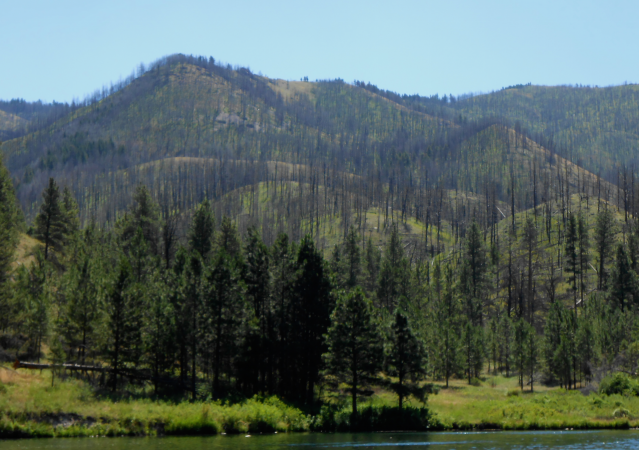 The latest victim in the Obama administration’s overregulationpalooza appears to be just about anyone who wants to snap a picture in a nationally designated forest.

According to the Federal Register:

“The proposed amendment would address the establishment of consistent national criteria to evaluate requests for special use permits on National Forest System (NFS) lands. Specifically, this policy provides the criteria used to evaluate request for special use permits related to still photography and commercial filming in congressionally designated wilderness areas.”

The commenting period for the amendment is open until November 3.

September 25th, the National Forest System released a statement to clarify the proposed amendment. “The US Forest Service remains committed to the First Amendment,” said U.S. Forest Service Chief Tom Tidwell. “To be clear, provisions in the draft directive do not apply to news gathering or activities.”

The agency claims the measures are to protect federal lands, and I’m sure that’s the case, and have no objection with these types of wildlife preserves. But even the clarifying statement is vague:

“The fact is, the directive pertains to commercial photography and filming only – if you’re there to gather news or take recreational photographs, no permit would be required. We take your First Amendment rights very seriously,” said Tidwell. “We’re looking forward to talking with journalists and concerned citizens to help allay some of the concerns we’ve been hearing and clarify what’s covered by this proposed directive.”

Congressionally designated wilderness areas are protected by the Wilderness Act of 1964 and must remain in their natural condition. This is achieved in part by prohibiting certain commercial enterprises, and the agency is responsible for ensuring its policies adhere to that standard.

Right. So news crews, no permit needed. Movie crews, permit required. Got it. But what of the tourist and amateur photographer?

Generally, professional and amateur photographers will not need a permit unless they use models, actors or props; work in areas where the public is generally not allowed; or cause additional administrative costs.

If I’m on a family trip and take a picture of my sister in front of a mountain, is she then a model and do I need a permit?

If I take a picture of my tent amidst a scenic forest backdrop, or a raccoon digging through my Chex Mix, does that mean I’ve used a prop and should’ve obtained a proper permit?

Fascist progressives loves to over-regulate and criminalize every tiny facet of our society. That way it is easier for them and their government union thug cronies to selectively enforce the laws/regs as a means of persecuting those who don’t go happily along on their big government fantasy ride.

I know it quite dearly. That’s the way things work in the place where I came from, certain island in the Caribbean. It was like that in all the countries of the Communist block too, as far as I know.

Basically, EVERYTHING is against the law unless expressly permitted by the government. Then the government looks the other way and allows you to break the laws for as long as you openly express support for the ruling cast. The minute you fail to happily wave their flag, you are ostracized and/or left to rot in jail.

I really like the coon and the Chex Mix. Anybody who has ever dealt with a raccoon knows that the Chex Mix was a lost cause; the bandit faces never give up food once they claim it.

The Forest Service is staffed with enviro-libs that believe everything humans (except themselves) do is evil. They really don’t want to allow any people in THEIR forests and will find every reason to deny access.

So just how many movie production companies are running rampant through the protected species plants, driving down streams, etc. with no permits, no notification to the park service, etc? I remember the Park Services thugs blocking off overviews on public highways so that people couldn’t stop and look at Mt. Rushmore during the Govt. shutdown last fall. Yeah, I’m sure everything about this new rule is completely innocent.

Yeah. This new reg was assigned to be drafted by some lackey… in anticipation of possible new govt shutdown threats? (We just had one.) All those embarassing pics of orange cones.

I wouldn’t doubt somewhere in this regulation Harry Reid is involved. He’s still sore over the Bundy incident and he’s looking for a way to keep it off the TV next time something like this happens. Statists/ Progressives/Marxists all want control.

Talk to ranchers about how the Forest service and the BLM deal with them regarding their leases…..Remember the rancher last year whose cattle were killed and water ponds destroyed?

So they want to put a padlock on the purple mountains majesty now…???

I guess we need to watch for any move against the beautiful, spacious skys next. Are they going to issue us all blinkers?

Interestingly enough, Teddy Roosevelt banned Kodak cameras from national parks because it violated the privacy of the other visitors.

So? Teddy was an authoritarian fool!

He just believed that people had a right to privacy. He thought they could enjoy the national parks without having their pictures taken.

What expectation of privacy is there in a public venue?

Ask that of a cop the next time you see him arresting someone… just bust out your cellphone and start taking video. Then when he rushes you with his billy club and/or tazer, just ask him what expectation he has of privacy in a public place… being a public employee to boot.

p.s. make sure your medical policy is paid up before you try this. and don’t do it when you have to be at work early the next morning.

Actually, Teddy was a dyed-in-the-wool Progressive. He probably would have loved this proposed regulation. Or any new regulation, for that matter.

At a lot of these parks you used to see signs with the admonition “Leave only footprints; take only pictures.”

If pictures are too intrusive, how long will it be before they deem mere human presence to be undesirable?

“Sorry, Mr. Adams – you didn’t secure the proper permits before you took that picture of Half Dome. We’ll have to confiscate your equipment.”

Don’t fool yourselves. It’s not about “preserving the environment” – it’s about CONTROL ~

Because (they think) they can.

Because they keep getting away with this unconstitutional crap.

Because no one bothers to stand up to the fascists.

Click on the Federal Register link in the article and submit a comment (on right side). I sent one several days ago when I first saw this. May not do any good but if we comment and forward to others, perhaps? I can’t believe anyone would care for this POS no matter what side of the political fence they are on.

“The US Forest Service remains committed to the First Amendment….”

Interesting verb choice, “remains.” How long will that last? Remains to be seen.

An odd comment. Commitment to the First Amendment.
They think they have a choice?

It’s time for the fed to divest itself of the majority of federal lands.

I totally agree. There are various legal structures (eg. trusts) that could be employed to protect the land and ensure it stays undeveloped forever, while at the same time reverting day-to-day control back to the states from which it was originally confiscated by the feds.

You will probably need a permit for feeding the racoon, too. Just $25 for ‘filing fees’.

Hold on, now. Before you get to snapping pictures, you’ve got to fill out your required film or SD card purchase application.

To be somewhat the contrarian, this isn’t most of FS land, but just designated wilderness areas. Most FS land is designated multiuse. Wilderness areas are much more restricted – no motorized vehicles, no cutting, no hunting, little burning, pack it in and pack it out, etc. Commercial filming typically violates this by allowing all sorts of things into the wilderness area that are usually not permitted – helicopters, motorized vehicles, etc. Far larger footprint than anyone else gets to have, in an area where your passage is supposed to be minimal.

How fast do you think the enviro-nuts and climate change fools will move to change the designation of all federal lands to wilderness areas? Look at Keystone and Alaska.

The Capitol has a flat, 100% ban on “commercial” filming. This is video and photo, and “commercial” includes “Uploading to the Internet”.

Any 1st Amendment lawyers interested in taking this on, do let me know.

I used to coordinate film shoots for companies that rented out our facilities. I got to set the prices and terms, and it was all based on the size of the shoot: “talent” + production team, and how much time they needed. (We had strict hours during which the shoot could take place: no earlier than 6:00 am and no later than 10:00 pm, but anything outside of our NORMAL nine hour business day business hours was charged at an increased rate. And I always got, “Well, in the film industry, that is not OUR normal business day.” But where I worked was NOT part of the film industry, and OUR normal business day was 8-5.)

Anyhow, a permitting structure based on the number of people, and the amount of time, would be a more reasonable approach. With the nonsense the USFS is proposing, an amateur photography buff, with a really nice Nikon or Cannon, and some good equipment, just taking vacation photos with their family may get prevented from doing so by the USFS. Ridiculous.

How stupid are these people? Have they NEVER seen a photo or film shoot in their lives?