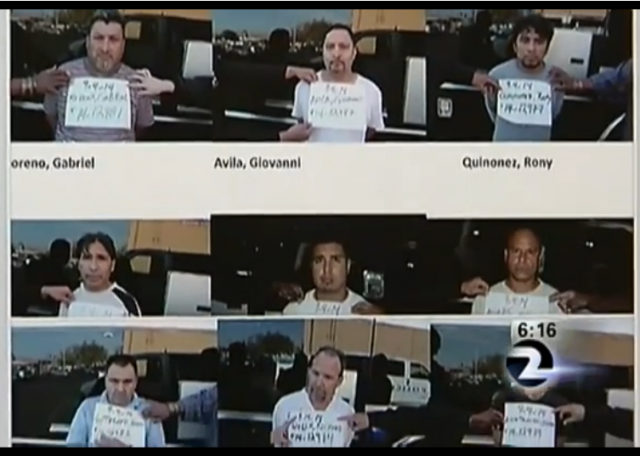 The police of the California city of Richmond are waging a social media war against prostitution…one that fans of “pet shaming” pictures on Facebook will recognize.

When a man is caught soliciting a prostitute, the punishment police hand out is usually far less than what they will find at home when their wife or girlfriend find out.

So police in California are using the tactic of shaming Johns by posting their pictures online, in hopes the embarrassment being shared with the public will be enough to curb prostitution.

It appears that the tactic is meeting with initial success. In a video report from KTVU Channel 10 News, Jim Sciarroni, who owns an auto body shop near a hot-spot for prostitution, says that since the department started posting the pictures on their Facebook page: “Traffic has slowed down, there’s very few that come by here during the day. The traffic on Ohio has quieted down.”

Local news has this video report:

‘What happens when charges are dismissed or acquitted? Will their mug shots live on in a Google cache for years, only to be discovered by neighbors, employers and family members years later?’ San Francisco public defender Jeff Adachi asked SFGate. ‘Once information is made available on the Internet, it is captured and recaptured, so it is never erasable.’

San Francisco resident Giovanni Avila, 47, was one of 11 men busted Thursday for soliciting undercover cops and he claims he’s innocent.

He was driving with a friend to get tacos when they started chatting up the women and talking sex, but says he had no intention of actually going through with any of it.

‘They may catch some guys that do that every day, but then again, they might catch another guy that was not planning on doing that and never has done that before,’ he said. ‘I think it’s an invasion of privacy. That could hurt some people’s lives and way of living.

However, nothing succeeds like success. Business owners in the area are happy with the results. Now, let’s hope California’s bureaucrats come up with equally creative ways to solve the rest of our state’s problems.

Something tells me a radical group like the ACLU will be all over this.

Yeah, this violates the Constitutional protection against being offended, embarrassed or made fun of, doesn’t it?

(Note: Post contains sarcasm and does not reflect poster’s actual or implied knowledge of the United States Constitution. Not valid in KY, LA, RI, DE, HI, or the Republic of Ireland.)

I thought that punishment for a crime was supposed to come after a trial.

…something I read once about the processing of dues or something.

Seriously, it’s California. If there was the slightest danger of getting sued, they wouldn’t go near it. I just think it’s funny that people won’t bat an eye about going to jail, but having their grill posted on Facebook is this big tragedy.

Prostitution is a crime that involves at least two people: One buying sex and one selling sex. Why are the photos of the people buying sex the only ones published on sex shaming websites? In fairness, the photos of both parties should be published, don’t you think? Both parties are committing a crime (except in the case of undercover police entrapping unwitting johns).

In a lot of places, they post the pictures of the accused prostitutes. I haven’t been able to find any for Richmond, CA immediately, but I’m sure if I look for a bit I could find it.

Think about the added heat of “slut-shaming” a woman a good civil lawyer could use in a defamation suit!

“He was driving with a friend to get tacos when they started chatting up the women and talking sex, but says he had no intention of actually going through with any of it.” Personal liberty issues aside, this guy is full of shit.

Something tells me a radical group like the ACLU will be all over this.”

They should be, absent a conviction and sentencing to public shaming.

Wouldn’t it be better to legalize prostitution and stop using the police to ruin people’s lives?

Is that what police are “being used for”? Really?

Are you assured that nobody’s life is ruined by legalized prostitution?

The police are enforcing policy that does nothing other than ruin people’s lives. Whether that is intended or not isn’t the issue. Police action can’t stop the activity; they can only make the consequences worse. There are thousands of legal ways to ruin lives I see no reason why prostitution should be an illegal one.

“The police are enforcing policy that does nothing other than ruin people’s lives.”

Well, I was hoping to engage a NOT idiot on this, but…

Yeah, that’s right. As in a complete waste of taxpayer dollars. Our police have far more important things to do but we continue to put them in an impossible situation when we require them to enforce these kinds of laws. You are the idiot.

Should I have said, “Unthinking, irrational extremist”?

Because that’s what you have demonstrated you are.

There are arguments to be made here. You can’t participate.

What are your views on immigration?

No, that unfairly forces Gentleman’s Clubs to compete for the best and brightest from the limited talent pool available.

Get politically involved and put pressure on the politicians.

I’m surpised that with our civil fortiture laws the way they are that these individuals did not get every penny in their wallet confiscated as well as their bank accounts before the charges even hit the courtroom.

Who says they didn’t?

I’d rather have the cops rounding up, arresting, and deporting ILLEGALS who consume city services and benefits than two consulting adults engaged in a private business transaction.

THAT is one HELL of an ASSumption…!!!

Can we give politician shaming a try? “My name is Barack. I lied when I said you could keep your health plan, so you would vote for me.”

Ok, back to the discussion at hand regarding the public shaming:

This will last exactly as long as it takes them to falsely accuse one person with sufficient resources to fight the charge and counter-sue for defamation of character, or who happens to be a lawyer of even moderate notoriety.

Immediately upon charging an individual in one of the two categories above, the City of Richmond will get hit with a Temporary Restraining Order from providing, delivering or in any other way releasing the photo of the accused on the grounds that once released, there is no adequate remedy at law in order to restore that person’s reputation. If they’ve already released it by the time the TRO is issued, God help them.

Alternatively, if one person fights the charge and wins (via dismissal or acquittal), he can then civilly sue for defamation per se (its a sex crime), malicious prosecution, violation of civil rights and I’m sure a host of other violations of his privacy interest under the California Constitution.

There’s a reason that Wayne County Michigan (where Detroit is located) doesn’t do this anymore with the accused Johns. They LOST (or were in danger of losing and settled) one-too-many defamation suits and had to pay through the nose.

Specifically one they settled was after one of their undercover Sheriffs engaged in a Sting operation arrested someone for solicitation who did nothing other than tell her “go away.” Conservative estimate in that case alone is $3.5 million in payments (settlement confidential of course). Between that and a small handful of other cases, there is an estimate of about $12 Million in losses. For a bankrupt County, that’s a big number for the population to swallow.

The arrogance of the police doing something like this is only matched by the stupidity of the leadership allowing it. It is a recipe for disaster.

This will last exactly as long as it takes them to falsely accuse one person with sufficient resources to fight the charge and counter-sue for defamation of character, or who happens to be a lawyer of even moderate notoriety.

Fixed that for you. (Feeling snarky today).

It’s not entirely clear to me what takes place here. Are the men in the pictures the ones who have pleaded guilty and have agreed to this as part of their punishment? The article in the provided link seemed to be implying this was done almost immediately after the men were arrested.

This “shaming” strategy seems to have a lot of potential for backfiring on the police and the city of Richmond. If you get a speeding ticket you can appeal (and perhaps win in court if you can prove you are innocent), but how do you appeal something like this?

So, what happens if one of these johns has a video camera and wanted to make a movie? Doesn’t that magically turn the prostitute into an “actress”?

OR there will be tomorrow…

Eventually they will target some man who commits suicide because the public shaming ruined his life. And his widow will sue everyone involved for millions.

Or someone who decides to get revenge on the police on his way out. Suicide by police shooting, several officers shot and killed in the process.