A generation will now grow up thinking that “unlike” George Bush, Obama sought partners. 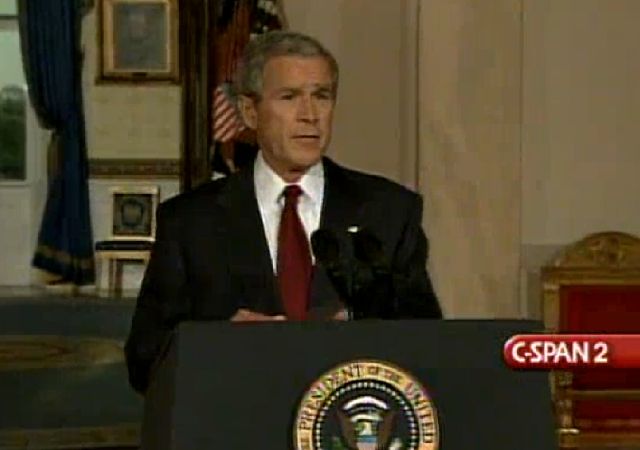 The NY Times made a rather large error the other day, and then issued a correction:

“…[Our article] gave an incorrect comparison between efforts by the president to seek allies’ support for this plans and President George W. Bush’s efforts on such backing for the Iraq War. The approach Mr. Obama is taking is similar to the one Mr. Bush took; it is not the case that “Unlike Mr. Bush in the Iraq war, Mr. Obama has sought to surround the United States with partners.”

Hot Air points out that the Times is hardly alone in its egregious error (or was it a purposeful falsehood, otherwise known as a lie?) What’s more, what took the Times ten days to figure it out, when the Times own contemporaneous coverage of the Iraq War easily refuted it?

It’s the old “fool or knave” question again. You might ask why we should care anymore, and I have to admit I care a lot less than I once did, because I have grown accustomed to the MSM’s tendency toward stupidity/ignorance, reckless disregard for the truth, propensity to lie, blatant bias, and intense and shameless arrogance.

But the process by which the Times and the rest of the MSM forms the opinions of the public (and it still is highly influential in doing so) remains a huge problem.

At first it occurred to me that perhaps the Times article had been written by a young person who might have even been a child or teen during the Iraq War.

That’s one of the problems with the MSM these days: many of its correspondents are so young they don’t know what they don’t know, but can be somewhat forgiven their ignorance because of their youth. What can’t be forgiven is the decision their supposed superiors have made to give them so much responsibility before they’re ready for it.

But no; in this case, the article’s author Mark Landler is 48, not old but no spring chicken either. During the Iraq War he would have been well into adulthood, and was already working as a journalist (mostly in the business sphere, however), so he should have known better. And of course, there should be editors at the Times to catch the error and correct it before it ever saw print, but they failed as well.

Perhaps Landler (and/or the editors) did know better, and was purposely lying and hoping to not be caught. For them, perpetuating the myth of Bush the Cowboy and Obama the Thoughtful Internationalist could be far more important than telling the truth, and well worth risking criticism and even the need for a correction which, after all, most people don’t even read.

But it’s also possible they all really are that ignorant and unaware of the truth. And perhaps that’s even worse than an outright lie would have been. Why do I say that?

Because they should have known and should have remembered, had reason to know and reason to remember, and yet they didn’t, which illustrates how often ideology trumps facts. Way too many people believe what they want to believe, and have no trouble revising history and/or memory to fit what they would like to be the real version of things.

In a way, it would actually be better if Landler and the editors were actively lying instead of profoundly ignorant. If they’re lying, then there is hope—albeit exceedingly slim—that they could reform and change their ways. But what chance is there if they are merely unconsciously constructing reality as they see fit, unaware that they’re even doing it?

A recitation of the Democrat’s “Bush’s go it alone policy” talking point.

Repeated often enough, the lie becomes the accepted truth. Despite being old enough to know better, Landler probably thought it WAS true.

Then its our duty to inform that generation that the NYTimes had played PR agent for the Third Reich during its early days. This rag above all rags has a record of being the platform of dictators, anti-semites and political hacks.

“…despite its intensive coverage, the New York Times did not leave its readers any more aware of the tumultuous turns of events in Germany than did other newspapers.

On the contrary, more often than not, the paper tended to misinform and confuse its readers by discounting, ignoring, and even withholding disturbing facts and ominous signs that most other major publications included in their analyses.”

And irony is still dead.

Look up Duranty, Walter. Then look up “irony”.

Look up Miller, Judith. Then look up Bush, Prescott.

Wow. There really is not a lie you will not tell…or at least hint at, huh?

The New York Times prints fantasy. They have decided that ALL news articles are just opinion, and therefore that they can write anything they choose, without fact-checking, or any regard for truth.

This is a persistent pattern, and it goes far to explain the Howell Raines and Jayson Blair scandals for fraudulent reporting. These people were simply products of the New York Times business model, and not aberrations.

It’s impossible to distinguish between the opinion page and articles at the NYT.

Maybe you could blame it on lazy journalism, lazy editors and no budget for fact checkers (they’re union employees and we know how the hypocritical owners of the NYT hates to pay union wages and benefits). When I see these things in the Liberal media presented as “facts” I immediately do a Google search and within five minutes I’m able to justify my doubts. Research is a skill no longer taught at J-school.

“Wow. There really is not a lie you will not tell…or at least hint at, huh?”

Wow, there is no scream of “LIE!” that you can actually back up, huh?

Judith Miller reported on exactly the same stuff that Ball-less Bill Clinton understood, and from largely the same sources.

Prescott Bush was never remotely a Nazi or a Nazi sympathizer. That is just an old lie from the battiest of the moonbattery.

As usual, the Clownselor REACTS.

I love how your reactionary, evidence-free, declarative statements, based on (??!!?) are supposed to be accepted as a matter of fact.

I’m not sure if the fact that your empty, declarative statements are so easily disprovable, establishes your own stupidity, or the stupidity of your fellow collectivists who will flock to defend you.

We’re just going to assume that you have NOTHING to back up your assertions – as usual.

“I’m not sure if the fact that your empty, declarative statements are so easily disprovable, establishes your own stupidity…”

Well, then DO that “easy disproving”, you stupid liar.

Don’t talk about it.

As always, I invite everyone to acquaint themselves with the facts as I relate them. I like people improving their minds. I NEVER ask ANYONE to accept what I relate on faith.

Now, you have the floor. DISPROVE what I said, you lying sack of excrement.

Ah, yes, it’s my job to DISPROVE your claim that I am lying.

So we’re safe in assuming that you’re not going to support your original “LIE!!” scream? Correct?

Yes. As you SAID. My statement was “easily disprovable”.

Otherwise, I again invite anyone who can READ to investigate my statements and satisfy themselves I am both knowledgeable AND truthful in what I related.

“You might what to put some ice on that…”

You don’t inherit the sins of your fathers or your other ancestors so it doesn’t really matter if GWB’s grandfather was a fan of Hitler or not. Progressives just want to use this as a tool to attack their political enemies.

Rags, did you read the thread about trolls being active sadists? Tex seems to fit the description pretty well.

Don’t hold your breath waiting for it to disprove your data; trolls can’t do that as it would mess with their ability to do their drive-by pot stirring.

He is WAY the fluck out of him mind, and I have no hope whatsoever that he’ll stop doing what he does. I just enjoy punking him.

See if you can find his patterns. He only has a few, and not enough wit to realized he needs some new material.

The one he used above used to be one his most successful ploys until I took it away from him.

And where are all of the liberal pacifists screaming that invading Iraq (again) is all about the oil?