Prosecutors had sought up to 16 months jail for Dinesh D’Souza, who pleaded guilty to a campaign finance violation.

But a federal judge today ruled that there would be no jail time.

Via The Smoking Gun:

For the first eight months of his probation term, D’Souza will have to live in a “community confinement center” in San Diego, ordered Judge Richard Berman, who also fined D’Souza $30,000 and directed him to undergo “therapeutic counseling.” D’Souza will also have to perform one day per week of community service during his probation term.

In remarks before announcing D’Souza’s sentence, Berman said that he did not believe the defendant had accepted responsibility for his crime. “I’m not sure, Mr. D’Souza, that you get it,” said Berman, who referred to D’Souza’s claim that he was a victim of selective prosecution.

Added: Here are the Judgment and Sentencing court documents: 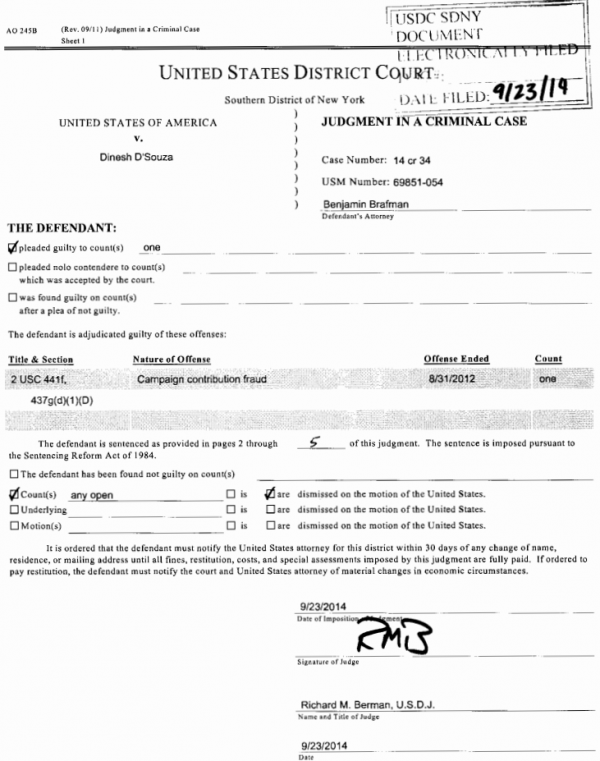 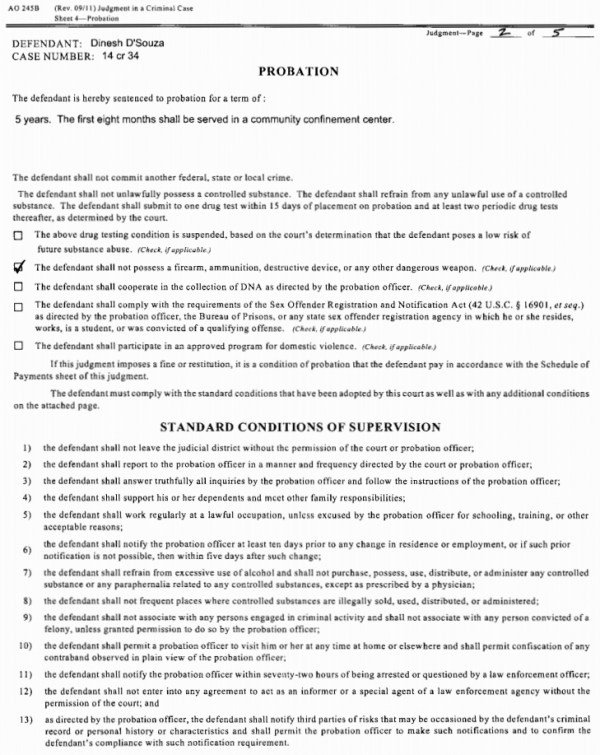 He did break the law. And, he got a light sentance. But, equal justice under law is a joke in the USA.

Not sure what you mean Matt, by equal justice. D’Souza broke the law, admitted it, and is paying for it. Others, who are on the left, have broken campaign laws and have never been prosecuted.
Selective prosecution. Yes. But regardless,he broke the law….

It’s hard to claim equal protection when sentencing is unequally applied because of political ideology.

We are all equal. But, some are more equal than others.

ps – pls tell me what ‘therapeutic counseling’ and ‘community confinement’ was applied to Jon Corzine ….

therapeutic counseling ??
that sounds odd.
the leader is good type of counseling?

That “weekly therapy” bit should be a red alert to everyone.

The Left calls it “re-education”.

Myself, I am a lost cause. I cannot be re-educated. I’m too old … can’t teach an old dog new tricks. And BTW, I am too much infatuated with our Constitution …

So he moves into some sort of “halfway house” for eight months, and does one day a week community service.

Maybe he could teach history to kids, who are academically starving in revised history propaganda classes, in public schools?

I don’t really “get it” either, as to why D’Souza did this. Maybe just to impress the “girl”. His productions have been powerful … so now the government will have a choke collar on him for five years.

Meanwhile, Al Gore still skates from being caught doing illegal fundraising at a Buddhist temple. He falsely claimed there was “no controlling legal authority” and AG Janet Reno looked the other way. Of course, D’Souza should have let others make the selective prosecution argument — but if we’re not sure D’Souza “gets it,” we can all be damn sure that Gore, Reno, Clinton, Obama, Madame Clinton and Holder don’t get it, won’t get it, and will never be held to account for any of “it.”

In the meantime, D’Souza gets a sentence that is much better than it could have been.

Harry Reid used campaign contributions to finance his daughter’s wedding and can’t wait for LI’s coverage of his trial.

LOL – I suppose it depends on what the meaning of “it” is. Now, where have I heard that before?

BTW, funny how there is no ‘community confinement’ and ‘therapeutic counseling’ for committing perjury and suborning perjury ….

Al Gore is very rich, and has connections. That’s the reason.

The goal here was the five years probation and they have it. I wouldn’t expect the next D’Souza film for, oh, six years.

Exactly what they did to James O’Keefe. They got him under ‘entering a federal building under false pretenses’. Then kept him from leaving his home state for years – so he could not pursue his journalistic exposes.

Going to jail and being done with it would make more sense than having this crap — eight months of halfway house, one day a week community service for years, iolation results in jail time anyway, etc.

JackRussellTerrierist in reply to mumzieistired. | September 23, 2014 at 6:47 pm

Justice, my butt. Obamullah, Pelosi, Reid, and so many others have done so much more so many times and never an eye is blinked.

I’m sickened by this.

He should have used the “No controlling legal authority” defense. Hey, it worked for AlGore!

Should we start a pool on when Professor Jacobson gets picked up?

How about another pool on what the trumped up charge(s) would be?

I say this because, along with the D’Souza witchhunt, center-right political pundit Stephen Hayes (Weekly Standard, FOX News) has been placed on the DHS’ Terrorist Watch List.

Just a matter of time before they come for our guy.

Would that pool cover unwarranted search and targeted IRS audits?

Sure, we can factor that in.