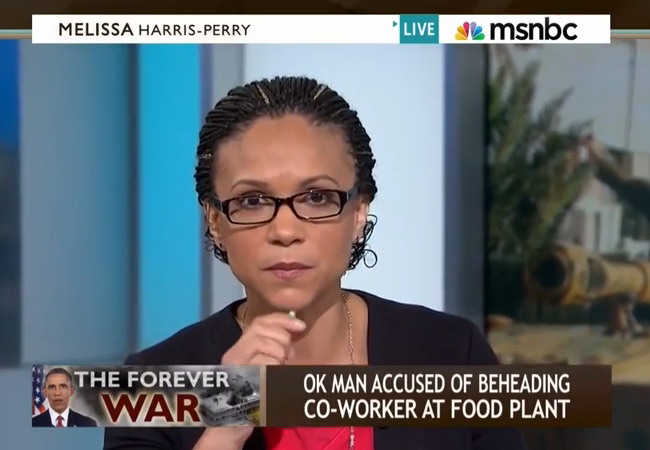 A panel on Melissa Harris-Perry’s MSNBC program discussed the beheading of a woman in Oklahoma by Alton Nolen, a convert to Islam as to whom a picture of Jihadist sympathy is emerging.

Perry insists that this was an act of workplace violence and treats the beheading as a passing detail.

At times, they all enjoy a laugh.

Video by Soopermexican of The Right Scoop:

No linkage? They wouldn’t be saying that if Nolen were a Tea Partier.

In fact, they probably were praying he was a Tea Partier, or some other type of “right-winger.”

Just like they were praying that would be the result after the Boston Marathon bombing and every other public act of violence.

I miss those tampon earrings ….

Alister, you started from the wrong end.

“bsNBC and the Oklahoma beheading: what could go right?”

I’m self-promoting from the tip line for contrast…

Megyn (sigh) Kelly (sigh) brings it on the beheading in Moore.

I ran into this exact claim (it’s no more than regular workplace violence) on a conservative friend’s thread on FB. The person stating it was so obviously a lib but claimed she was not due to supporting 2A and the actions of the boss. She also referred to Muslim proselytizing a “hobby.” These people deny Islamofascism staring them in the face here in America and their aggressive stupidity and ignorance are directly to blame for these incidents. There would BE NO Muslim extremists (which IMHO is a redundancy, anyway) in this country but for the America-hating Left.

Melissa Harris-Perry and “friends” are not ignorant or stupid they are in denial of truth. Yes, Alton Nolen went ISIS and ISIS is Islamic see Koran, Hadiths and Sira.

Has she been so indoctrinated that she really believes, or do you think she is following orders?

One way to find out is does she have the Courage and Autonomy to have a respectful on air conversation with a guest who won’t sing to the choir?

Okay, it was a workplace killing.
Using a characteristically Muslim method of execution.

In fact, they probably were praying he was a Tea Partier, or some other type of “right-winger.”

In addition to that prayer, lefties (and of course Muslims) add this, “Please don’t let it be a Muslim.”

This was heard repeatedly on the Boston Marathon bombing during the 3-4 days between the killings on Monday April 15 2013 and that Friday April 19 2013 when the cops were closing in on the Muslim Tsarnaev brothers, having identified them as the suspects.

People seem to be missing the obvious. The killing of the victim was workplace violence. The follow on beheading was an act of terrorism. After all, why else behead the victim? What was the reason for the beheading since the victim was already dead? The answer is inescapably obvious to anyone but a liberal.

Cleetus, you’re once again making the mistake of expecting a prog drone to follow a logical thought process.

Indeed! In Criminal minds parlance, I believe the ‘stressor’ was being fired, but his methodology was clearly informed by his religion and that religion’s recent charming series of video’s involving beheadings of unbelievers.

To pretend that it’s just crazy talk that anyone would associate the two is typical MSNBC nonsense. Yes, people also do associate mass shootings with white males, and gang violence with black males, and terrorism with muslim males and it is because we’ve seen enough of it to make that linkage. It’s called noticing reality.

BSNBC it is, then. Or Moonbat Scum NBC. Either way….

Right, because here in America beheadings are commonplace.
Especially when people get fired.
Sure.

You will never believe what I heard on MSNBC Morning Joe this morning! Wow…

I watched your film clip and have concluded that Melissa Harris-Perry and friends are all morons. Does the Left realize how stupid these people make them look to the average informed citizen.

Look, I realize that since she is given time on a cable station carried in millions of homes, she has some newsworthiness. However, it’s a waste of time to analyze what a bimbo says; just because she has dark hair, don’t let yourself be distracted: she’s bimbo all the way.