Will the jury accept his claim of self-defense? 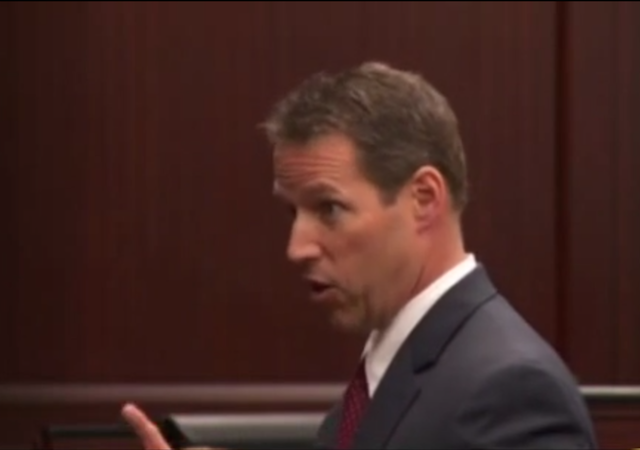 The re-trial of Michael Dunn began today “for real”, with the jury impanelled and the state and defense presenting their opening statements.

Dunn is on trial for the killing of Jordan Davis, a black teenager Dunn fired upon during a confrontation with Davis and three of Davis’ friends, who were sitting in their SUV.  Dunn claimed self-defense, arguing that Davis pointed a shotgun-like object at him, threatened to kill him, and began to exit the SUV to attack him. It was only then, Dunn claimed, that he retrieved his handgun from the glove compartment of his car and fired on the SUV.

Complicating Dunn’s defense were the facts that he fled the scene, that he never contacted police, and that nobody observed the purported threatening actions of the people in the SUV except for Dunn.

The prosecution moved through ten witnesses today, a considerable number considering that witnesses were not called until after opening statements were completed (of course), and opening statements did not even begin until well after noon.  At the close of court today Judge Healey informed both parties that tomorrow the trial would run from 9AM to 6PM.  I know, to normal people that’s a vacation, but to a typical trial court that’s “full steam ahead.”

No . You can’t just shoot people dead in a public place because their music is not to your liking. What would have happened during theGhettoBlaster era? Carnage.

Unless he can bring up some hearing / noise PTSD eg IED – then he is goindown for a long time – is my guess.

Which would be relevant if that was his defense.

Of course, that is NOT his defense.

Thus it is irrelevant.

With no changes to the evidence and a hung jury before, isn’t the sole issue then his level of intent at the time of the crime?

Also, as it is a retrial, are the jurors allowed any knowledge of his already having been convicted of several felonies in the first trial? Or is that, as customary, too prejudicial?

“With no changes to the evidence and a hung jury before, isn’t the sole issue then his level of intent at the time of the crime?”

His intent to do what? To shoot Davis? That’s not an issue in dispute.

The outcome of the trial will be determined by whether the jury believes that the state has disproven beyond a reasonable doubt any one of the fundamental elements of Florida’s self-defense law.

If so, Dunn’s guilty as charged. If not, the jury’s will be instructed to acquit.

A few days ago, you helpfully commented on the grammar of a post I provided on another matter. Perhaps I can return the courtesy, highlighting something your post currently provides:

First Coast News in Jacksonville is live-streaming the trial, unedited:

Live video coverage of the Michael Dunn trial is available here, when court is in session. Warning: All coverage is unedited and may contain explicit language and images.

iPad app viewers: click the Live Now button at the top right of the screen.

I think the three teenagers who were in the car with Davis when he was shot are up today.

Both openings were OK, but the State’s was going away superior.

The defense never hooked her opening, and that is a major omission, IMNHO.

“Too late…insufficient…not good enough”. That is a good hook.

Guy goes WAY too far into the evidence, and he should have been objected to for that, shutting him down regardless of how the judge ruled on the objection. You can preview what you contend the evidence will show, but you can’t testify.

I think Dunn is going down. I do believe him when he says he was in fear of his life, however I just don’t think that fear was reasonable, which means murder.

It really is academic at this point, just the sentences for the Attempted Murder charges will pretty much equal a life sentence for him.

Wait, when the Judge is instructing the Jury he says Dunn is charged with Murder in the 1st degree. I thought it was 2nd degree murder?

First degree is the correct charge, and it fits the facts of this case if one decides self-defense has been disproven.

In other words, it was either self-defense or it was murder 1.

The confusion may be that he was also charged (and convicted of, in the first trial) three counts of ATTEMPTED murder in the SECOND degree.

Yep, that’s what it was. I made the critical mistake of making an assumption, with the usual outcome :-), I just assumed that since the Attempted Murder charges were 2nd degree then the Murder charge must have been 2nd degree as well.

“as soon as it was safe, he left” – Yeh, and went far far away and never came back, never called 911 from home, nuttin. Surely an innocent man ???

LOSD lesson #37 – be the first one to call the cops. 🙂
Establishes moral high ground.
Adds to your air of innocence.

Crooks don’t call the cops. Ever.

“Crooks don’t call the cops. Ever.”

“LOSD also suggests we should not talk to the police without a lawyer present.”

Perhaps my zeal for simplification has gotten this off on the wrong foot.

Ok, I’ll concede the “Crooks don’t call the cops. Ever.”

Ever is a loooooong time.

How about instead, “It is a rare day when a crook calls the cops.” Better?

I was “overstating for effect”. Obviously, I thought. Maybe not so obvious after all.

On talking to the police… I believe that I’ve heard you state, and read you state, that one should not talk to the police after defending yourself with deadly force. I believe you give examples of why this is so in your book, though I’d have to go digging to find the page number. Have you not even pointed your readership towards youtube videos with police officers in them stating this very thing? I’ve even seen you chastise others who suggest that one should talk “just enough” to establish innocence, to preserve evidence, identify witnesses, etc.

If I’m wrong, I’m wrong. Please straighten me out. Maybe I’m thinking of somebody else.

This is important. You know that more than I do. It’s important for every single person you’re trying to reach with your message, in advance, on how to avoid making a mistake that will get them 20 years in the slammer.

If the answer is to go back and read your book again, then that’s fine. Will do.

I’m very well known for NOT being an advocate of the “SAY NOTHING UNTIL YOU’VE SPOKEN TO YOUR LAWYER” school.

I am instead an advocate of “SAY ONLY THESE LIMITED SPECIFIC THINGS AND ONLY IF YOU HAVE TO” school.

THEN say the “magic words.”

It’s also, of course, very important to recognize that there are AT LEAST three very distinct types of police interactions you’re likely to have after using force against an attacker, and they are ALL DIFFERENT in terms of how you communicate.

I’ve written and spoken about this perhaps hundreds of times. But if you can’t find it, look up a seminar in your area, you’ll get to hear it all first-hand and at great length.

Actually, I am the one’s that usually links to video’s.

Specifically these two, however, neither of them say don’t talk to the cops.

I think Andrew has given you the best advice below, find his Seminar near you. I read his book and attended his Seminar, even with the 3 hour drive in July heat it was well worth the time, I highly recommend both. Heck I even bought the book in paper form and for my kindle.

I am gonna go with the thought that you have never actually read the book or been to the seminar.

I recently bought a gun and I’m crash-coursing this stuff, lots to learn, and probably getting my sources confused. Egads. Sorry. Me culpa, as they say.

Thanks for the reply. Would love to get you to speak here in the People’s Republic of Maryland for a seminar, but alas, we’ve talked about that before.

If are just gonna carry for the first time then I would recommend that you take a “Force on Force” class and at least a beginners defensive pistol class at a reputable place. Both are great if for nothing else than the practice exercises that they teach.

I definitely see the need for self defense training, and of course I don’t mean just practicing shooting (though that of course is a necessary thing).

Now don’t get me wrong – I’m not one that would legislate training as a legal requirement to buy a gun – there are 2A demons to be found down that path.

In Maryland, the chances of me getting a carry permit are very low, even though I own a business. Maryland is not a “shall issue” state. Maryland is a “shall run” state. Our state bird should be the chicken – You must run away! Run away from any threat and run some more. The street belong to the thugs. If they want your wallet you must give it to them! Don’t dare fight back in Maryland! Lord no. 🙂

I own a gun to protect myself and loved ones in my home. Even there in the castle there are many mistakes one could make in self defense. Wafer and Marissa Alexander leap to mind.

Addendum – Somebody linked this video in a past discussion. Herein the “don’t talk to the police” meme is simply bashed into your head, over and over again. In this video there is a “guest policeman” who even advises against it. 🙂

That video is mostly correct and also mostly wrong.

Mostly correct with respect to interacting with investigators after the scene has been secured (although even then some of his anecdotes are just, well, wrong). I’m not aware of ANYBODY who advocates talking to THOSE guys without counsel present.

Mostly wrong with respect to the OTHER types of police interactions that precede the investigators.

Also it’s always seemed very odd to me that no one has EVER been able to tell me that lawyer’s name. Everybody shares around his video and favorably cites his advice–and no one has any idea who he actually is.

Thanks for the feedback on this video Andrew.
I was hoping someone would jump in and comment.

Yeah, well you likely had something pre-prepared. I was just listening to WOKV on my iPhone while literally (yes, literally) herding cats :p