Michael Dunn, previously convicted of the attempted murder of three others, is being re-tried for the murder of Jordan Davis 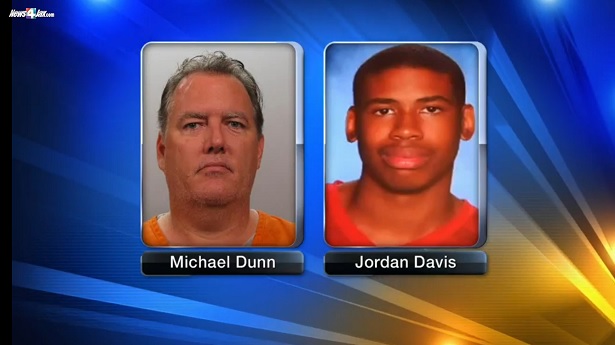 Jury selection begins today for the re-trial of Michael Dunn on a murder charge for the shooting death of teenager Jordan Davis, reports Business Insider.

At his prior criminal trial Dunn was convicted of three counts of attempted second-degree murder and one count of “throwing missiles” (firing a bullets) at a motor vehicle, but not on the charge of murder (on which the jury hung).

We followed the Michael Dunn case closely here at Legal Insurrection, doing far too many posts to list individually:  those interested in viewing them can click here.

A quick summary of the facts of the case are that Michael Dunn found himself parked beside an SUV containing Jordan Davis and three friends.  Dunn claimed that Davis threatened to kill him, pointed a shotgun-like object at him, and began to emerge from the SUV.  In response, Dunn claims, he retrieved his lawfully licensed pistol from the glove compartment of his car and began engaging the SUV with fire.

Importantly, Dunn fired three distinct groups of rounds at the SUV.  During the first group the two vehicles were beside each other, and Dunn fired from his driver’s seat position slightly backwards to rear-passenger door of the SUV, behind which Davis was sitting.  Davis was mortally wounded by that fire. 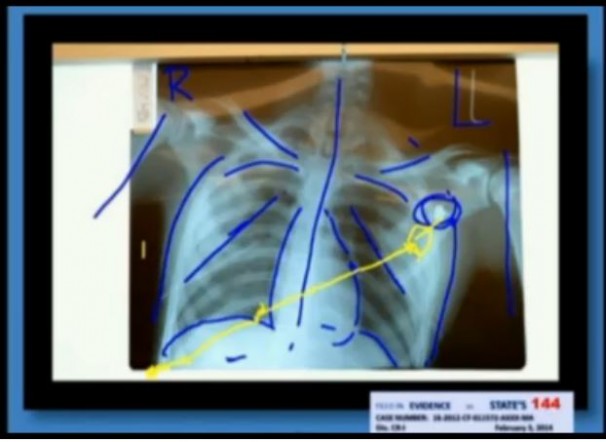 Dunn then fired a second group of rounds as the SUV began to back-up from the parking space.  These rounds struck the front-passenger side door, but failed to penetrate to the interior of the vehicle. 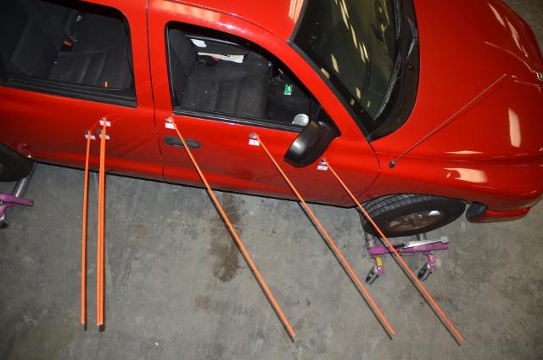 The third and final group of rounds was fired as the SUV was driving away. For these Dunn emerged from his car, took a knee, and sent four rounds after the fleeing SUV.

Dunn claimed self-defense as legal justification for all rounds fired.

That last group of rounds, fired while the SUV was fleeing, were sufficient to support the jury’s verdicts of guilty on the three counts of attempted murder (of Davis’ three friends in the car) and the throwing missiles charge.

That is, the jury was convinced beyond a reasonable doubt that this last burst of fire could not be justified as lawful self-defense.

The jury would ultimately hang (come to no unanimous decision) on the charge of murder for the killing of Jordan Davis.  Post-trial interviews with the jurors revealed that at least three of them were unconvinced that the state had met its burden to disprove beyond a reasonable doubt Davis’ claim of self-defense with respect to the rounds that killed Davis.

Because the jury was not unanimous on the murder charge–either to acquit or convict–Dunn was subject to retrial on that charge, and indeed prosecutors announced immediately after the verdict on February 15 that they intended to do so.  Thus we arrive at today’s jury selection.

Even if Dunn is acquitted on the murder charge on re-trial his prior convictions for attempted murder and throwing missiles would remain unchanged (subject, of course, to an appeal on those specific convictions).

Those prior convictions alone, as required by Florida’s mandatory-minimum “10-20-Life” law mean that Dunn is facing a minimum of 60 years in jail.  Dunn has been held in prison while awaiting re-trial on the murder charge, but his sentencing was delayed until the results of that re-trial are known.

Judge Russell Healey, who presided over the first trial, will also preside over the re-trial.

Dunn will be convicted this time and he will be sentenced to life, which his current conviction is already pretty much a life sentence.

The throwing missiles charge is just hilarious, it always gives me this vision of someone chucking a spear at a moving vehicle.

This retrial looks like a spectacular waste of the taxpayer’s money. Why bother, just to add an actuarial nullity to his sentence?

I am thinking a couple of reasons.

1. Race relations, they are scared if they don’t try for the murder conviction they will be accused of being insensitive to the death of a young black man.

2. It is a bit of a black mark on the prosecutors record. This pretty obviously wasn’t a good shoot, even if Dunn was actually in fear it is doubtful that the fear was reasonable, though after hearing the evidence I think he was just pissed to be honest. So the conviction for attempted murder without the murder charge looks bad for the prosecution and prosecutors want convictions.

It’s just my opinion, but I find Dunn an embarrassment to the vast majority of reasonable adult CCL holders out here.

Good grief, there are obnoxious loud-music-playing trash-talking teens — white, black, hispanic, asian — in this world, and they are young and stupid and annoying as all get-out sometimes. But especially if you only have to put up with them for a few minutes while you run into a gas station, you as a grown-up just shake your head and put up with it.

Dunn was just weapons-grade stupid both in his reaction to the youth in the car next to him and in his subsequent reaction (continuing to shoot at the vehicle while it was trying to get away from him, fleeing the scene, not giving police a chance to look for the gun he claims was pulled on him) that I just can’t find any sympathy for him whatsoever.

Thank you Amy. You said exactly what I was thinking. I wish more would learn to communicate with words and resorting to violence. I’m also a CCL. I think, for me, having a firearm makes me more aware of how I must be the one to be rational, calm and peaceful in an otherwise volatile situation that can quickly get out of hand. I dislike loud, obnoxious music or people too, so, just tune it out until they’re gone. As long as they’re not in my home or threatening my life, we’re good. I try to always live by “A gentle answer turns away wrath, but a harsh word stirs up anger.” [Proverbs 15:1] New Living Translation
Have a blessed day.

I meant “and NOT resort to violence”. Brain fade. *lol*

Plus, the colossal mistake of fleeing the scene without immediately notifying authorities you are doing so. His next stop should have been the police station.

What a waste of time and resources. He’s already going to die in prison — time spent on this trial is just time he doesn’t have to spend in prison. If it were me, I’d be making really good use of the time in the courthouse meeting with my lawyers to also meet with family and friends and have my favorite foods brought in. And I’d be instructing my lawyers to drag this trial out as much as possible.

Dunn will probably be convicted. But the possibility of an acquittal raises some interesting legal issues. An acquittal may jeopardize his prior convictions. § 776.032(1), Fla. Stat. (2014) states:.

A person who uses or threatens to use force as permitted in s. 776.012, s. 776.013, or s. 776.031 is justified in such conduct and is immune from criminal prosecution and civil action for the use or threatened use of such force

In the face of an acquittal, Dunn’s counsel may use this statute as a basis to mount a substantial attack on the earlier convictions. Such an argument would likely be a case of first impression. How it would be resolved cannot be determined.

Different use of force, different victims, different charges, different facts–I don’t see even an acquittal in the re-trial having any effect up on the prior convictions.

Of course, there may be independent grounds for attacking the prior trial conviction, but that’s entirely independent of this second trial.

I think the trial judge is likely to see it your way. Intermixed in the claim I outlined is the issue of whether the Court or the Jury determines for purposes of immunity whether these separate bursts constituted independent acts.

Dunn is likely to be convicted. The appeal I outlined above would probably fail. But why risk making new case law and undertake a trial that will result in very little additional punishment. One can never be sure what an appellate Court will do. You just make the argument.

I believe someone else here already made the point, but this re-trial MUST happen if only for reasons of politics and pride.

Neither requires a rational basis.

JACKSONVILLE, Fla. — Thirty potential jurors were dismissed Monday for having formed inflexible opinions about the Michael Dunn case that would prevent them from being impartial jurors.

I don’t really understand the whole process, but that seems like a fairly large number just for the first day.

The article goes on to explain,

“The group, which included 11 African Americans, acknowledged their bias in written questionnaires.”

If they wrote it right in the questionnaire, then they simply didn’t want to be there.

That goes directly towards the notion that Juries of made up of mostly people who weren’t smart enough to be able to get out of jury duty, lol.

JACKSONVILLE, Fla. — Fifty of the original 100 potential jurors in the Michael Dunn trial were excused for cause by late Tuesday morning. Reasons for their dismissal included financial hardship, health problems, poor English skills, and even being “disengenous” in their answers

Hopefully the state will fail to obtain conviction for murder and one day, perhaps, Dunn can obtain a significant commutation of sentence for the previous convictions.

He has no previous criminal record of any kind, correct?

The problem is that other than his own testimony there is no evidence that he engaged in lawful self defense. However, even with a failed murder conviction I don’t see him being able to get his sentence reduced. You can shoot at a fleeing vehicle, regardless of what he did before or after. His trial on the current charge of 2nd degree murder, of which he will most likely be convicted, just isn’t going to change that fact.

Bill Dung can’t seem to understand why Michael Dunn is even in trouble over what he did.

We might be reading about Mr. Dung in the annals of Andrew’s LOSD blog one of these days. “What NOT to do…”