You know, the core al-Qaeda that supposedly was decimated. 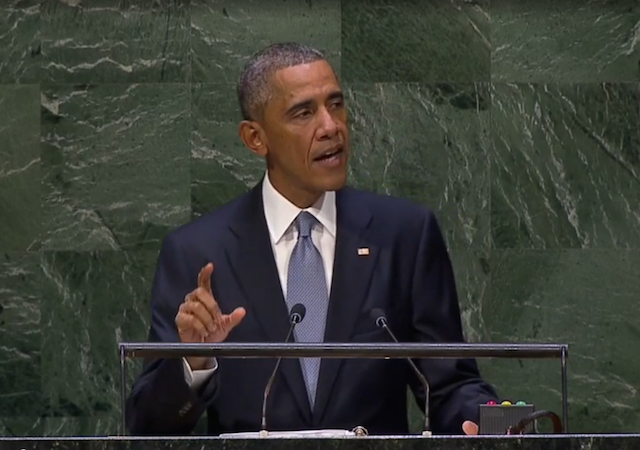 Do we really need to invent new terror groups to justify America’s actions in the Middle East? Is the Obama administration so reluctant to admit that al-Qaeda still exists?

If you ask Andrew C. McCarthy of National Review, the answer to both of those questions is yes:

The Khorosan Group Does Not Exist

We’re being had. Again.

For six years, President Obama has endeavored to will the country into accepting two pillars of his alternative national-security reality. First, he claims to have dealt decisively with the terrorist threat, rendering it a disparate series of ragtag jayvees. Second, he asserts that the threat is unrelated to Islam, which is innately peaceful, moderate, and opposed to the wanton “violent extremists” who purport to act in its name.

Now, the president has been compelled to act against a jihad that has neither ended nor been “decimated.” The jihad, in fact, has inevitably intensified under his counterfactual worldview, which holds that empowering Islamic supremacists is the path to security and stability. Yet even as war intensifies in Iraq and Syria — even as jihadists continue advancing, continue killing and capturing hapless opposition forces on the ground despite Obama’s futile air raids — the president won’t let go of the charade.

There is a reason that no one had heard of such a group until a nanosecond ago, when the “Khorosan Group” suddenly went from anonymity to the “imminent threat” that became the rationale for an emergency air war there was supposedly no time to ask Congress to authorize.

You haven’t heard of the Khorosan Group because there isn’t one. It is a name the administration came up with, calculating that Khorosan — the –Iranian–​Afghan border region — had sufficient connection to jihadist lore that no one would call the president on it.

The “Khorosan Group” is al-Qaeda.

Do yourself a favor and read the whole thing.

As we all know, the Obama administration loves to fuss with nomenclature.

And Al Qaeda, the one Obama claimed we decimated, is now apparently called the Khorosan Group.

Colonel Allen West isn’t buying any of it:

You see, Obama can’t bring himself to admit he was wrong — the essence of a self-absorbed narcissist — and even worse, his loyal kool-aid drinking acolytes can’t either. Obama declared two years ago that “Osama bin Laden is dead and al-Qaida has been decimated and on the run.” Well, as ESPN College Gameday commentator Lee Corso would say, “Not so fast my friend” — with his trusted pencil.

What was once al-Qaida in Iraq is indeed now ISIS. And the group Jabhat al-Nusra was created in Syria and is the representation of al-Qaida in Syria. So the Obama administration has basically created a new “boogeyman” to deceive the American people from understanding that al-Qaida is thriving — clearly not decimated.

This is simply more of what Collectivists do.

2. torturing the language to make it say anything

If you have two working brain cells, you know Pres. ScamWOW and the Obamabanana Republic have reduced our security across the board, and largely in service to No. 1 (above).

This is how you get people killed, hurt, and terrified. See Rotherham.

They’re doing verbal gymnastics to not look like the freshman foreign policy team, what with all their gloating during the 2012 campaign about how Bin Laden was dead and Al Qaida was on the run.

Well, any rational person could understand that Barry would have never been in a position to “pull the trigger” on the Bin Laden raid had it not been for the policies and ground-work put in by the Bush administration.

And now we see that in fact Al Qaida is on the run towards Baghdad, thanks to Barry’s decision to remove all troops. Funny to watch the youtube videos which juxtapose him insisting it was
Bush’s idea (or course it was!) with countless instances of him gloating about how he ended the war and brought the troops home.

It’s a wonder there aren’t more progressives running around going postal or ISIS, given the level of cognitive dissonance they must be suffering trying to justify to themselves their votes for this moron.

Are all those people, including the “Press” and the prog drone army, prepared to admit they made a monumental, foolish mistake when they ridiculed Romney for insisting that we should have left troops in Iraq?

This lying jackass, and his team of amateur hashtag-diplomacy sycophant jerkoffs, is doing damage to this country that will last for decades.

As to your last ‘graph, I hope you’re wrong. But I’m afraid you’re right.

If, indeed, not too optimistic. Some mistakes you just don’t find forgiveness for in Realityville.

I don’t believe there was an imminent threat. I do believe that Obama wanted justification for bombing Syria and Iraq and did NOT want to go to Congress for it.

So – Obama finds a group that professes ties to Al Queda and uses the open ended Congressional Resolution for Attacking Al Queda as his Carte Blanc for his war.

This is simply “Wag the Dog”. Obama manufactures the truth to conform to his desired reality

I have no clue about who or what the “Korosan group” is. All I know is that we have been lied to so many times if Obama told me the sky is blue I would walk outside and check.

It’s like Martha Robertson declaring to adoring supporters that she has Legal Insurrection decimated and on the run, but warning those supporters about a certain blog she refers to only as the Cornell Group.