They couldn’t be more different.

A new study from Johns Hopkins University suggests exactly what many conservative activists have been complaining about for years: Washington is out of touch with the rest of America.

Surveying 850 people who either work in government or directly with it, researchers found that the inside-the-Beltway crowd has very little in common with America at large. Washington insiders are more likely to be white. They are more educated. Their salaries are higher, they vote more and have more faith in the fairness of elections. They are probably Democrat and liberal. They more diligently follow the news. And they think the mechanizations of government couldn’t be easier to comprehend.

There are easy and reasonable explanations for much of this: if you live in Washington, you likely either work for the government, or work at a firm that works with the government. Many of these jobs are specialized—law, policy analysis, statistical consulting—and generally require a graduate degree. Of course you vote—that’s how you decide who you have to put up with at work for the next two, four, or six years. You read the news because you’re either in it, making it, writing it, or countering it.

But we all know that when it comes to mass messaging and perception, none of that matters.

“The elements of difference we have identified between the rulers and the ruled — demographic, experiential, partisan and ideological — give us some reason to suspect that the two groups may not perceive the political world in the same way,” the authors write. “Taken together, these elements could well create a substantial cognitive and perceptual gulf between official and quasi-official Washington on the one hand and the American public on the other.” 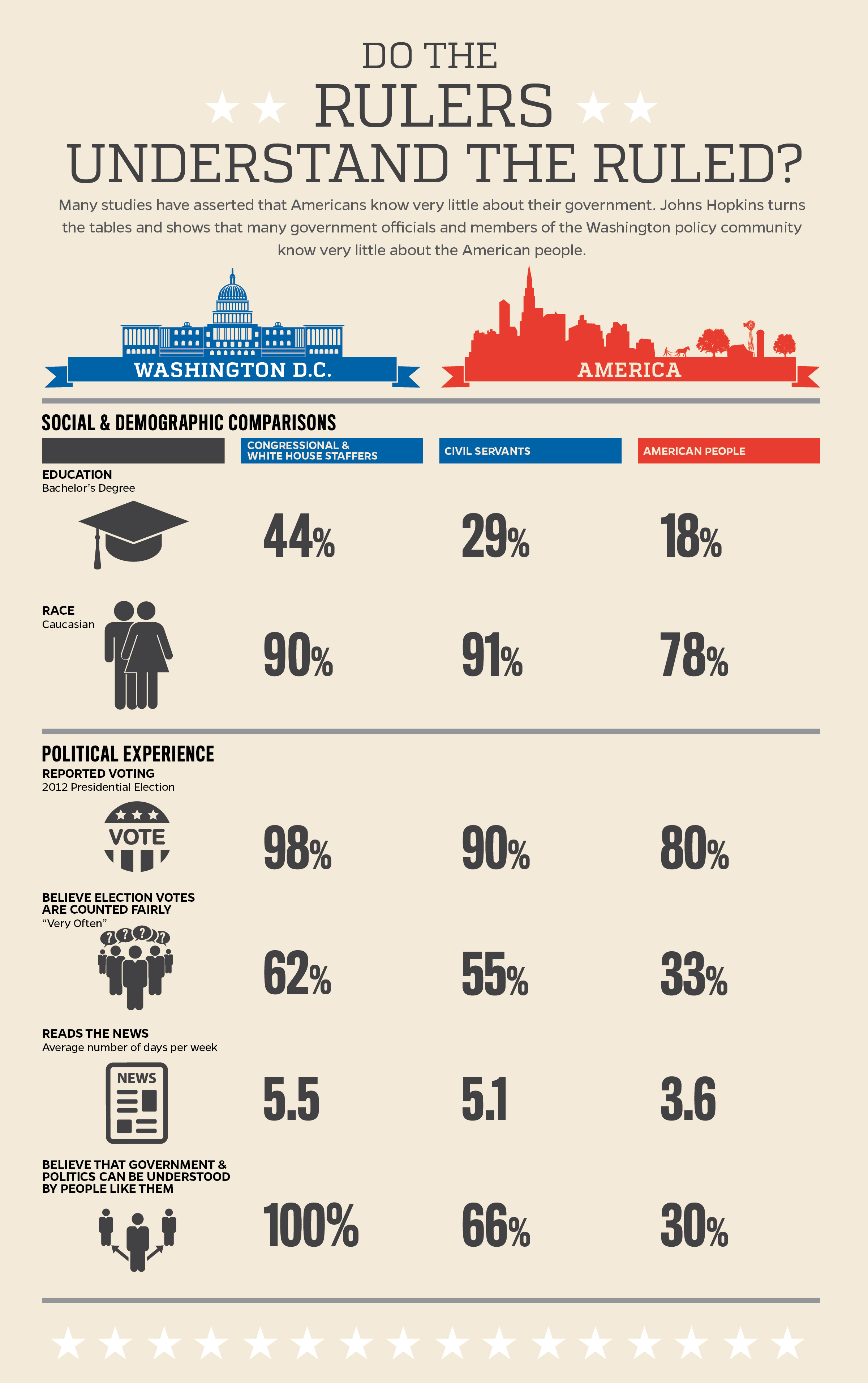 There you have it. “Real America” is more diverse, less wealthy, more conservative, less educated, and less informed. But does all this really matter?

It all comes down to perspective. The first thing I think of when I think of someone who represents me is someone who has been instructed in the canons of statutory interpretation. I want bookish and deliberate; I want an engaging but thoughtful speaker. I have no patience for timewasting rhetoric. I’m also coming from the perspective of a practicing attorney who has been trained to write and interpret legislation. Someone else’s version of their perfect Senator or pundit may be completely different—but that doesn’t make it wrong.

Let’s say it again: that doesn’t make it wrong.

We need the brains, because they write the policy. We need the firebrands, because they rally the troops. Washington isn’t the Borg; it’s the Breakfast Club: a swampy, weird, ugly-pretty sampling of all that America has to offer.

We can either learn from each other, or ignore the realities of policymaking while we fight each other. I know what I pick.

Which choice represents you?

There is no such thing as “America at large”. The “average” American is a person with one testicle.

I choose a pony.

“Doesn’t everyone get invitations to Embassy parties? I get them all the time and I’m just a Congressional staffer.”

“As democracy is perfected, the office of president represents, more and more closely, the inner soul of the people. On some great and glorious day the plain folks of the land will reach their heart’s desire at last and the White House will be adorned by a downright moron.” — H. L. Mencken

true… and which is why this isn’t supposed to be a democracy.

The author is absolutely right that a variety of perspectives usually produces a better outcome.

However, the real problem is not that Washington is out of touch with the rest of America.

The real problem is that too many in Washington are out of touch with the Constitution.

They view the Constitution not as a binding set of rules which limits their authority to act, but as an outdated document that we can pretty much ignore.

It’s old (and we’re chronological snobs).
It was written by white guys.
Some of those white guys owned slaves.
They had a view of human nature which said that people – including those who govern – need restraints.
But they were wrong (obviously, since they owned slaves).
And we’re smarter now.
So we don’t need those limits.

The political elites have placed themselves above the rest of the people and in doing so they haven’t cared a wit about what that public does or thinks. A poll won’t change that. Driving most of DC from their jobs will.

There’s a small but highly pertinent group that also likely has no clue about the American people and that’s the John Hopkins survey team, whom I’d be very surprised to learn weren’t all leftist liberal academics.

The high horse elites are not just in government. I include the media and academia as well.

That “small group” I think includes the Democrat Party in its entirety.

With less than 50% of eligible voters doing so, we deserve what we get. Only 37% know the three branches of government. Go to an Ivy League school and ask a student who ISIS is. They don’t know. Hell, they don’t know who their own congressman is. Education sucks which creates apathy. This country is in the toilet. But Nancy Pelosi’s Botox job looks just great, don’t it?!?