Life in the theocracy gone wild. 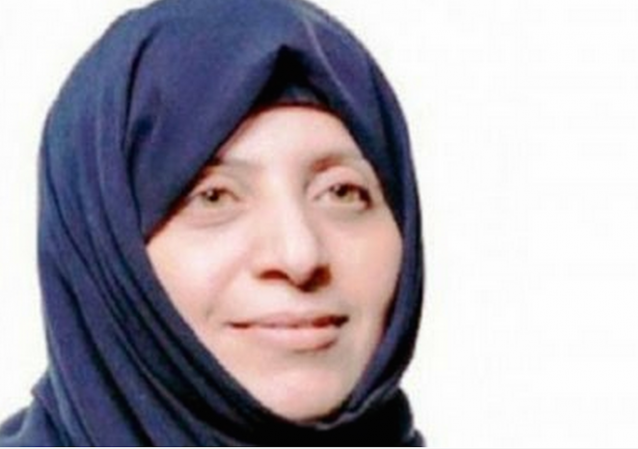 A Muslim civil rights lawyer and mother of three was found guilty of apostasy by an ISIS-founded sharia court in Mosul. Her offense? She posted a blog post to Facebook that was critical of ISIS’ destruction of places of worship. She was then tortured for days and suffered a public executed by masked firing squad.

The UN Assistance Mission in Iraq says Samira Salih al-Nuaimi was seized from her home on Sept. 17 after allegedly posting messages on Facebook that were critical of the militants’ destruction of places of worship in Mosul. According to the UN mission, al-Nuaimi was tried in a so-called “Sharia court” for apostasy, after which she was tortured for five days before the militants sentenced her to “public execution.”

She was killed on Monday, the UN mission said. Her Facebook page appears to have been removed since her death. “By torturing and executing a female human rights’ lawyer and activist, defending in particular the civil and human rights of her fellow citizens in Mosul, [ISIS] continues to attest to its infamous nature, combining hatred, nihilism, and savagery, as well as its total disregard of human decency,” Nickolay Mladenov, the UN envoy to Iraq, said in a statement.

An AP wire story posted on Women of Grace has more details:

The UN claims she was publicly executed by a masked firing squad in front of a government building in central Mosul.

Afterward, her husband and family were warned against giving her a funeral, according to the UN High Commissioner for Human Rights Zeid Ra’ad Al Hussein.

“Al-Nuaimy was seized from her home by ISIL fighters and tortured for days before she was killed in cold blood by a squad of so-called fighters”, Zeid said.

Sadly, al-Nuaimi is not the first woman to be brutally murdered by ISIS. Also according to Women of Grace, a female candidate in the last provincial council election was killed and her husband abducted. Yet another female politician was abducted and remains missing.

Meanwhile, we still have no clear strategy to deal with ISIS.

“First, kill all the lawyers.”

Iraq is a place where first Saddam Hussein, then Al-Qaeda, and now ISIS have focused particularly on killing leaders. There’s a reason why the average age of Iraqis is so low: decades of systematic attempts to decapitate the local society (not just government).

The Viet Cong did this too, yes? And for similar reasons I imagine? Religious fanaticism aside, it seems motivated to instill a sense that ‘you do not mess with us’.

The worst of those crimes were committed in Cambodia where all the intelligentsia were brutally murdered by Pol Pot.

This is so tragic. And to think Moochelle O’Liar thinks that we are worse to women than these poor souls under Sharia Law? I wish someone would send her (and Chief O’Liar) to Iraq and see how long they live.

Ah, yes. Sharia courts. Like the ones popping up all over Britain to appease their resident savages.

And when the Archbishop had a chance to weigh in — when was that, 6-8 years ago? — he said it was just peachy that Muslims should have their own courts.

Satan is on the march — and today his legion is Islam.

I detested the previous Archbishop of Canterbury and have found that the new one is no better… it seems that the new guy has a loss of faith!!

Wait — we’re having radical Muslims behead people in America — and it’s only the beginning.

People of the likes that frequent conservative websites need to wake up and realize that ‘Obama’ (or whoever he really is) is a traitor. Period.

The battle cry of the Mittens Romney milquetoast campaign — sold by Squeaker John Boehner — will be, “Quit while you’re a head.”