Welcome to Iran, where being “Happy” is not allowed by order of the Mullahs. 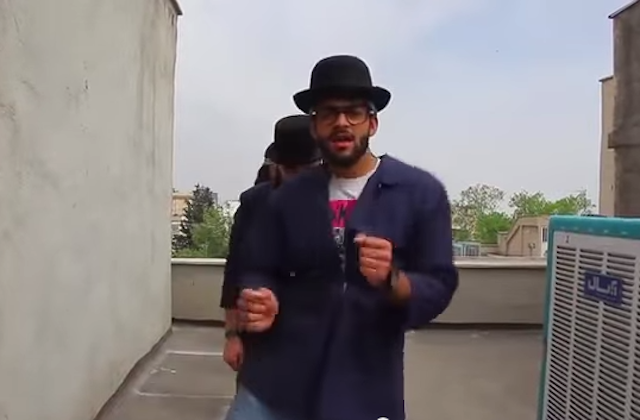 This is a horribly heart-breaking story. Seven young Persians filmed their own rendition of “Happy” by Pharrell Williams, but in totalitarian regimes like Iran’s, no good deed goes unpunished.

A CNN Reporter tweeted the following:

Today their lawyer, Farshid Rofugaran, told IranWire that six of his clients had been sentenced to six months in prison and 91 lashes. One of them was given a sentence of one year in prison and 91 lashes. “Fortunately,” said Rofugaran, “the sentences were suspended.” But he was quick to point out that, until he received official notification, he could not be 100 percent sure of his clients’ situation.

The group were arrested in May 2014, a month after their video— part of a global campaign launched by pop star Pharrell Williams — was viewed by more than 100,000 people on YouTube. During their incarceration, they were humiliated and forced to confess on national television. They apologized for making the video, and said they had been tricked into doing it. After the confession they were released on bail.

Will the group appeal? “We can accept the verdict or appeal,” says Rofugaran. “I will do what my clients want me to do. We are happy that both the prison sentences and the lashes are suspended.”

“They are not banned from leaving the country,” the lawyer said when asked by IranWire about the terms of their sentence. “Some of them have even travelled abroad during this time.”

And here’s what landed them 91 lashes each. Can you believe these hoodlums?

It’s the guy who wrote that dumb song that should get the lashes.

Can you all hear the outrage?
You know, from the millions of muslims who disagree with these atrocities against human dignity?

“There is no fun in Islam.”

WHAT were the charges?

Popular music – and most all music – is banned in Iran, and anywhere the islamists take power. Dancing in public, making unauthorized videos, these are also prohibited.

You should read the cautionary recommendations for American military, diplomatic, or civilian contractor personnel serving in muslim nations like Saudi Arabia, Kuwait, or Pakistan, especially for females.

Freedom is easy to take for granted unless you don’t have it. Which is why so many people’s dream is to come here.

How tremendously sad…a society without music. Must the birds quiet themselves as well?

But, of course, we who have no respect for a religion/regime that does not allow women to feel the sun on their skin—we are intolerant.

We were on vacation a few weeks ago at a hotel near a beach. They were not guests, but on the two weekends that book-ended the vacation there was a small group of Muslim women just hanging around in the lobby. I presumed that their designated male was somewhere in the hotel doing something. These women were not happy. One had an infant in a stroller and she was the saddest looking of all. She stared out the window at the beach. At one point, they were down at the beach…wrapped up, standing on the sand while families with sense frolicked in the waves. They probably went home and got a few lashes for looking at the surfers.

Remind me again how horrible it is to live in a Christian or Jewish nation? I’m just not getting it.

(our ultimate weapon against Islam is the internet, and the p0rn and music it delivers to them)

Horrible; barbaric; 91 lashes could very well kill a person – even if they are meted out at 4 lashes every week for the duration of their sentences. These lashes can break bones; they can flay swathes of flesh from the body.

And yet. We have a dance of open consorting among the sexes, uncovered women, inter-sex touching & hugging, and doing so in public. Since the rise of the Ayatollahs in 1979, and re-introduction of Sharia Law, such activity has been forbidden. Strictly forbidden, sternly forbidden and with torturous and deadly enforcement.

These dancers had to know what they were risking. How could they not know? Was this production a taunt of the authorities by them? If so, that would move this from a “Happy Dance” to a very serious and very heroic undertaking.

That their sentences were immediately suspended suggests that the authorities know that they are being played. This affair strikes me as a good deal more than some light-hearted playfulness.