Calls for growth and development, removal of obsolete laws, and thanks Indian-Americans. 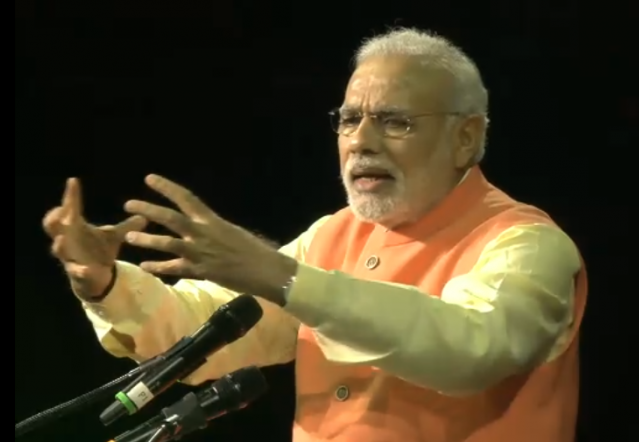 I watched much of the speech, with English translation, but it was really, really long (full video here), so I only heard parts.  The parts I heard were similar to the economic empowerment and pro-growth policies that you likely would hear from a conservative growth candidate here.

Modi also cheered on the crowd of Indian immigrants, thanking them for raising the profile and pride of India. 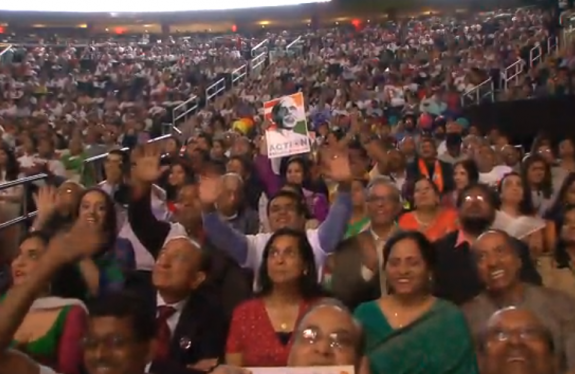 Here are some highlights gathered by an Indian TV network:

This will warm your hearts:

Here are some tweets of the event by the Prime Minister and others:

More than 20 US elected representatives joined PM @narendramodi prior to his beginning his speech. #ModiAtMadison pic.twitter.com/zdLPa1ZLbz

Winning elections is not about any post or chair. It is a responsibility. Since taking over, I haven't even taken a 15 min vacation: PM

The THREE assets of India that will help it make 21st century as India's century. As enunciated by #ModiAtMadison pic.twitter.com/rfo0RDAiZT

A picture of my meeting with Jewish leaders in New York City. pic.twitter.com/r1TAtyg02o

PM Netanyahu met in NY with Indian PM Modi, in the first meeting between the PMs of Israel & India in over a decade. pic.twitter.com/DKZWmgsxC1

Republican Congressman Joe Walsh was his early supporter but he is the only one who openly recognizes and supports his conservatism among Republicans. Here is an article:
http://www.dailyherald.com/article/20120603/news/706039869/

I’ve spoken with a lot of Indian computer tech supporters and they are impressively well-trained, well spoken, patient and courteous. The Indian-Americans I know are achievers and very competent in their fields. They make a great contribution to the world wherever they go.

Indians do not commit violence, threats, aggression, entitlement, demands, beheadings, rapes and riots wherever they immigrate, unlike that other group of immigrants that have infested the world.

There are Indian Muslims also. Lots of them.

Still relatively speaking, they are more culturally integrated and have a nationalistic sentiment when compared to say European Muslims. That is why you hear many Muslims joining ISIS from Europe, some even from US.

It’s wonderful to see the explosive improvement in the Indian standard of living since they turned away from the disaster Gandhi left them in his love of socialism.

This guy will keep it going, and millions will live better, longer, healthier lives because of it.

Free markets work. Every time they are allowed to work.

Too Conservative for the GOP!

I wonder how his meeting with Putin will go?

“The more laws we get rid of the better it will be for us.”

That’s a pretty careless statement. Zero laws would not be good.