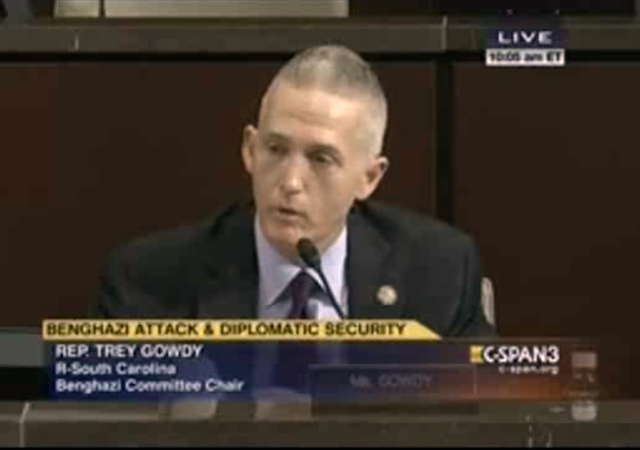 The House Committee tasked with uncovering what really happened when Ambassador Chris Stevens and three other Americans were murdered at the U.S. embassy in Benghazi held its first hearing today, reigniting the firestorm surrounding the State Department’s alleged mishandling of diplomatic security in the region.

Rep. Trey Gowdy of South Carolina vowed to pursue the facts wherever the lead him. Opening his committee’s first public hearing since its establishment four months ago, he stressed the thoroughness of the task ahead, not the need to reach immediate conclusions.

“Given the gravity of the issues at hand, I am willing to risk answering the same question twice rather than risk not answering it once,” said Gowdy, a former federal prosecutor leading Congress’ eighth investigation of the deadly Sept. 11, 2012, attack in eastern Libya.

Congress is still seeking documents from the Obama administration related to the attack, he said. More witnesses are being interviewed and individuals who’ve participated in congressional investigations will be questioned again. The special investigation was created to “find all of the facts, and I intend to do so fully,” Gowdy said.

Highlighted at today’s hearing was the testimony of Todd Keil, who raised concerns about out-of-date security protocols governing diplomatic security. Keil, who is a member of the Independent Panel on Best Practices, ripped into the State Department for ignoring the Panel’s advice and continuing on with ineffective methods of protecting diplomats overseas:

He said cursory actions would “ring hollow” without truly implementing the recommendations.

The testimony was a reminder of lingering concerns about the state of security at State Department embassies and consulates around the world in high-risk areas.

Pundits drew a sharp contrast between the tone of today’s hearings, and past hearings on Benghazi led by Representative Darrell Issa (R-CA). Even reliable liberal Dana Milbank of the Post was forced to admit that Gowdy and his allies handled what has become a controversial situation—both in topic and with regards to the Committee itself—fairly:

There was no discussion of talking points or stand-down orders, and only one of the seven Republicans on the panel — Jim Jordan of Ohio — even mentioned Clinton. Instead, Gowdy adopted as the theme of his first hearing an idea suggested by one of the committee’s Democrats, Adam Schiff of California: How well the State Department has been implementing recommendations to prevent future attacks on U.S. diplomats like the one in Libya two years ago that killed four Americans.

This is exactly what congressional oversight should be: a bipartisan effort by legislators to make sure executive-branch officials don’t repeat past mistakes. The resulting bonhomie was unprecedented in the two years of Benghazi bickering.

Members of the Committee expect their investigations to last well into the 2016 Presidential cycle, raising concerns for some that it could affect the rumored candidacy of Hillary Clinton. Gowdy, in typical Gowdy fashion, hasn’t even allowed this concern on his radar:

“So to those who believe it is time to move on, that there is nothing left to discover, that all questions have been asked and answered, that we have learned the lessons to be learned — we have heard that before. And yet the attacks and the tragedies keep coming,” said Gowdy in his opening statement.

You can read the full opening statements from today’s hearing here.

The pause before Gregory Starr’s answer (‘no comment’) to Rep Gowdy’s question indicates that every circuit I his noggin was desperately calculating alternative answers with the best chance of getting him off the hook with either Rep Gowdy or with Hillary Clinton. Because, as Assistant SecState for Security, Starr is the guy to whom Her Arrogance would have delegated the review she personally should have done for the security of Bengazi, and likely didn’t do.

One might think that Rep Gowdy had that figured out in advance, and now has some even stronger cards in his hand to play in future questioning. Neither Starr nor Hillary will sleep well with those potentials hanging over them.

“This is exactly what congressional oversight should be: a bipartisan effort by legislators to make sure executive-branch officials don’t repeat past mistakes.”

That whole “mistakes were made” line ignores the malfeasance and cover up angle. In this case, oversight means finding out who ordered what and seeing to it that they do prison time.

You can’t prevent future mistakes without exposing past malfeasance and cover-ups. That’s where this journey is supposed to lead, but Gowdy won’t get there by emphasizing that up front.

I just hope he gets the job done.

Well, I think if Milbanks expects the tone to continue along this road for the entire session he is going to be sorely disappointed. I cannot imagine Gowdy doing that. He is shrewd and patient. I think events will be revealed during these hearings that will cause the Post and Milbanks to circle the wagons so often and so fast it will bring a new meaning to the word, “spin”.

Trey needs to find out who in our government committed crimes and ensure that they are prosecuted.

The person(s) who failed to follow protocol and let the SoS respond to security requests by the Ambassador Stevens is guilty of murder by depraved indifference. Furthermore, the person(s) who violated Tyrant Obama the Liar’s order to do everything possible to save our people in Benghazi is guilty of treason and murder by violating a direct order from the CIC.

At least one of the ‘differences that it will make’ should be a rational skepticism of the administration’s ability, as well as the SecState at the moment who was responsible (as much as any of them are ‘responsible’ for anything) for the security of the ambassador.

I’m pretty sure the theory about intentionally putting the ambassador out as a ‘snatch’ target for the terrorists is a dud, but the fact is that Ambassador Stevens was placed in a dangerous situation without sufficient security, the danger of an attack was horribly downplayed, and the reaction to the attack was both bungled and delayed far too long. Admittedly the post-attack reaction was effective in certain regards: The ‘Annex’ troops stacked the attackers up like cordwood when they were permitted to engage, even without the needed air support, the remaining staff evacuations were handled tolerably well, and security around the event was airtight. (even to the point that Congress was unable to interview the eyewitnesses, which is just a bit *too* airtight)

So nasty Congressmen are bullying administration officials. At least that’s how I assume it will be reported, if not now, then eventually.

Thus far Gowdy seems to be taking more hits from the right than the left. Perhaps because they want a flame-thrower. If Gowdy is to have any credibility he cannot, and should not, start by alienating a good share of the public by behaving in a partisan and unreasonable way.

I’m sure as time goes on, and as he interviews many of the liars in the State Department and in the Obama Administration those who want fire will get it. He is/was a very good prosecutor.

If all that is wanted is to “get” someone rather than “get” the truth, I suspect Gowdy would not be your man. He is mine until he proves otherwise.

He is mine until he proves otherwise.

Mine too. His tactical questioning abilities are three times those of Rep. Issa, sad to say. And I have hopes for his strategic planning of the string of hearings and scheduling of witnesses, building on the information which as surfaced since the earlier hearings – and the abilities of Judicial Watch to extract information which Issa’s committee let itself be stonewalled on.

“Rep. Trey Gowdy of South Carolina vowed to pursue the facts wherever the lead him.”

Wait. Was that before or after Gowdy promised to prosecute the WH over BENGHAZI!!!!!

yesterdays video if anyone wants to watch

forgot to mention first few minutes are a placeholder.
may spend the 9$ and buy the cspan version and host it.

Thank goodness Gowdy got a new haircut. Now on to Rand Paul.

Disagree, Henry. I liked his old haircut. It was interesting and different, sort of like “Beam Me Up” Trafficante’s haircut.

Are you kidding? It was so bad it actually detracted from his well-earned gravitas and political acumen. It looked like he applied setting gel with a blender. Those haircuts were they carefully comb and gel it to look like it was never combed, ever, will end up earning more ridicule than the legendary mullet.

I’m the last guy around here who needs to lighten up. I probably need to heavy down. Darken down?

The Battling Boys of Benghazi
(Author unknown (but appreciated))

We’re the Battling Boys of Benghazi,
no fame, no glory, no paparazzi,
Just a fiery death in a blazing hell,
defending the country we loved so well.

It wasn’t our job, but we answered the call,
fought to the consulate, and scaled the wall.
We pulled twenty countrymen from the jaws of fate,
led them to safety, and stood at the gate.

Just the two of us, and foes by the score,
but we stood fast, to bar the door,
Three calls for reinforcement, but all were denied,
so we fought and we fought, and we fought till we died.

We gave our all for our Uncle Sam,
but Barack Obama didn’t give a damn.
Just two dead SEAL’s, who carried the load,
no thanks to us — we were just “bumps in the road.”