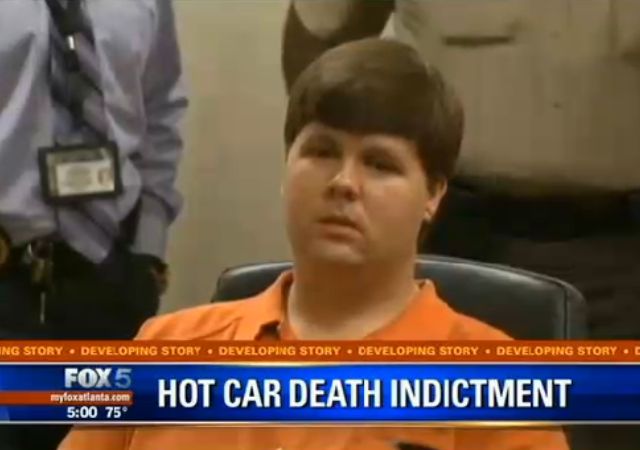 The Georgia father whose 22-month old son died after being left in a hot car earlier this summer was indicted Thursday and charged with murder.

A grand jury indicted Justin Ross Harris on eight counts including malice murder, felony murder, and cruelty to children in the first and second degree.

In addition, the indictment included counts of criminal attempt to commit a felony and dissemination of harmful material to minors, in relation to allegations that Harris had been exchanging sexually explicit messages with an underage girl.

Justin Ross Harris has maintained that he forgot to drop off his son Cooper at day care on the morning of June 18th, and that he had not realized his son was still in the car as it sat in the parking lot where he worked. Cooper died that day after sitting in the car for several hours in high temperatures while still strapped in his car seat.

At a probable cause hearing in July, the prosecution by contrast painted a portrait of a father who intentionally left his son in the car because he wanted to live a “child-free life,” referencing various online searches and viewing activity. Among that activity was alleged evidence of Harris having viewed articles posted in a “childfree” sub-forum of the popular internet site Reddit. Also referenced were allegations that Harris watched a public service announcement video about hot car deaths, and that both Harris and his wife had researched hot car deaths online.

Cobb County, Georgia police Detective Phil Stoddard also testified during the July hearing that Harris was allegedly sexting with other women – including one who was underage at the time – in the weeks before and on the day of Cooper’s death.

Harris is expected to be arraigned in the next few weeks, according to MyFOXAtlanta/AP.

View the full video report below, from MyFOXAtlanta. You can read the full indictment document here.

Was the baby’s life insured?

I understand insuring the life of a working parent to support dependents.

What’s the logic of insuring the life of a baby?

to cover medical and burial expenses if it dies

A baby is an expense. A baby with a life insurance policy can be a target.

It’s not uncommon to by a $20 term policy to insure male children in areas with lots of gang activities. That way momma will have money to pay for the funeral.

Parents and grandparents are often encouraged to buy whole life on infants most often with a rider that additional amounts can be added later in life without regard to risk factors. These policies are sold as an investment vehicle to create cash value for college.

Part of my law practice is doing wills. Parents commonly have life insurance on their children, usually in some small amount such as this. Oftentimes, they still have the insurance when their kids are in their 30s and 40s….

Not sure why, but they do.

For many years we tried desperately to adopt and there where few children available. We finally gave up.
This is such shameful behavior. Why don’t people put their children up for adoption anymore? It’s so much easier, there’s no jail time involved and one doesn’t lose their immortal soul to damnation. I guess the narrow path really is narrow.

if you give em up you lose the chip and ebt credits, yo!

Your cynicism is showing. 🙂

WRT insuring kids: First you insure the parents. Then you do the kids. No death is without expense. Medical costs, funeral costs. Sometimes lengthy periods off work will have a cost. $20K is about right. Would cost about $60 per year as a rider on the parent’s policy, and cover all children.
This would raise no flags in underwriting, and it isn’t enough to be an incentive to murder except for a moron.
Richard A. Aubrey CLU

Morons exist. There was a case in Chicago after the first Gulf War, where a woman and her boyfriend decided to kill her returning husband, for 15k. The Candy Man out of Houston who poisoned the pixie sticks, thereby killing his son, and attempted to kill his daughter, did it for the insurance, I do not recall the amounts, but the timing of acquisition of the policies was suspicious.

Of course they do. Truckloads of them!

Hey! There’s one sitting in the White House.

And if you check both houses of Congress, you’ll find quite enough of them.
Oh!
Go check MSM reporters, editors and columnists too.

True, they probably are not the kind that kills a child for insurance money. But a moron is a moron. You can basically expect anything and everything.

One statement you made is wrong. They DO kill children for insurance money.

I make no judgements based on news reports, but a jury heard both sides of the arguments and convicted.

That’s good enough for me.

Dang it, I need to pay more attention. Indicted, not convicted. Well, let the jury hear the arguments, and decide.

My main point is still valid, even if I temporarily had my head in the clouds.

Clouds are better than where progressives put their heads.

If he did this then I hope he rots in hell. i cannot fathom this kind of behavior. Souless.

If he did this, just let me handle it. He and I will take a nice weekend trip to a secluded area and then I will come home. Just don’t ask any questions later.

If he did this, I want to pull the switch.

Another “heck”.. Forget the switch. Let me hogtie him, take him out into Death Valley, stake him out, put a few superficial gashes on him to attract buzzards, vermin and insects, and leave him to in Mother Nature’s care.

THIS is the one who should be “vigorously prosecuted.”

This POS sounds like a perfect candidate for Dexter Morgan.