Holder: “I will never leave the work”

Holder: “I will never leave the work”

“Work remains to be done, but our list of accomplishments is real.” 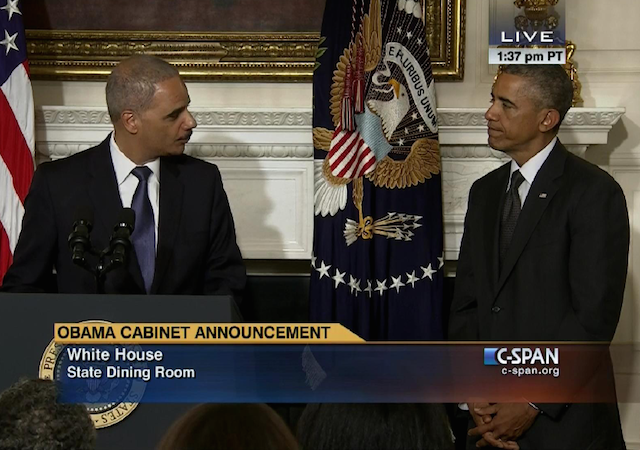 In a statement last hour, Holder officially announced his resignation, and pledged to continue the work he began during his years at the Department of Justice.

President Barack Obama praised Attorney General Eric Holder on Thursday saying Holder has worked for decades “to make sure that those words, ‘life, liberty and the pursuit of happiness’ are made real for all of us.”

“Soon, Eric, Sharon and their kids will be a bit freer to pursue a little more happiness of their own, and thanks to Eric’s efforts, so will more Americans,” Obama said from the White House, with Holder, who announced Thursday that he was planning to step down, standing at his side.

Obama said Holder did a “superb job” and called the moment “bittersweet.”

Holder, who grew emotional during his remarks, thanked Obama, as well as Vice President Joe Biden, senior White House adviser Valerie Jarrett and those who worked in the Justice Department.

“The work remains to be done, but the list of our accomplishments is real,” Holder said.

During his speech, Holder failed to list his numerous “accomplishments” as Attorney General, including overseeing Operation Fast and Furious, failing to defend DOMA (its merits and demerits aside,) becoming the first AG in history to be held in contempt of Congress, and overseeing Operation Choke Point.

Holder will remain in his post until a successor is nominated and confirmed.

You can watch the full video of Obama’s and Holder’s statements here.

I don’t really care for the subtitle of this post. I think we ought to publicize his actual “achievements” rather do filler with his propaganda.

1. For starters, failure to pursue the Blank Panther voter intimidation case. More: Black Panther Boss Who Got Off For Voter Intimidation Arrested.

2. Next up: Operation “Fast and Furious”. Obama’s ATF gun running scandal. Conveniently still not resolved. A judge today ordered documents released. This is not, of course, being covered by the media. (Does this have anything to do with the conveniently timed resignation?) More.

Just a quote from his speech, Janitor. We’ll do his tenure justice, believe me.

Zero would think Holder did a “good” job. They share an agenda: sticking it to Whitey ~

“”You can watch the full video of Obama’s and Holder’s statements here.
WHY?

I wonder if this timely move will prove that Holder’s got additional aspirations, or that someone has aspirations for Holder. But it’s just a guess – and a guess that causes me worry, at that.

So this gimmick represents an agreement between Obama and Ruth Bader Ginsberg on a satisfactory candidate that the president can appoint this year to replace her on the Supreme Court. That is the only way she will resign and the appointment must happen while the Senate remains in Harry Reid’s control.

It’s not that he didn’t defend DOMA, but he selectively normalized homosexual behavior. Democrats have a history of selective exclusion which created moral hazards left for future generations to reconcile.

Displaced or replaced around 2 million Americans annually, which just happens to correspond to the same number of Americans who were terminated during “planned parenthood”.

Assassinated at least one foreign leader.

Capital punishment without due process.

Progressive devaluation of capital and labor (approximately 4 to 5% annually).

Green technology which leads to corruption of the environment throughout its life cycle from recovery to reclamation, including oversea’s environmental degradation, domestic windmill gauntlets and solar ovens, clearing vast fields and sweeping away “desert tortoises”, with a marginal return on investment.

Armed the Sinaloa cartel, which murdered at least one American.

Armed ISIS, which murdered at least a dozen Americans, including half a dozen in Benghazi.

Abandoned a well-armed but green military in Iraq.

And this is just the preface to his biography.

Well, Holder or Obama. They are interchangeable, as the former protects the latter.

He was never the Attorney General of the United States, only of that portion of the citizenry who meet his discriminatory requirements.

Last night it finally rained in California, and then I wake up to the news that Holder resigned.
My sense is that he was the brain in Obama’s administration. I guess O is officially a lame duck now.

“Justice” is a joke when men like Holder and Harry Reid walk freely and prosper.

Holder has a Border Patrol agent’s blood on his hands.

I wonder if he sleeps well at night.

Holder is, was and evermore will be the biased and arbitrary shakedown artist of the American Justice system. He is a Black Panther w/o the black beret but w/the same raised fist.

He has been our national coward: always hiding, denying, stonewalling – always – and never willing to treat whites equally as with blacks.

Now, maybe, we can put the blindfold back on Ms. Justice.

Nor will he ever stop picking his nose:
https://www.google.com/search?q=eric+holder,+picking+his+nose&client=palemoon&rls=Palemoon:en-US&tbm=isch&tbo=u&source=univ&sa=X&ei=VEQmVMZOxZ7IBPj7gjA&ved=0CCQQsAQ&biw=1680&bih=902