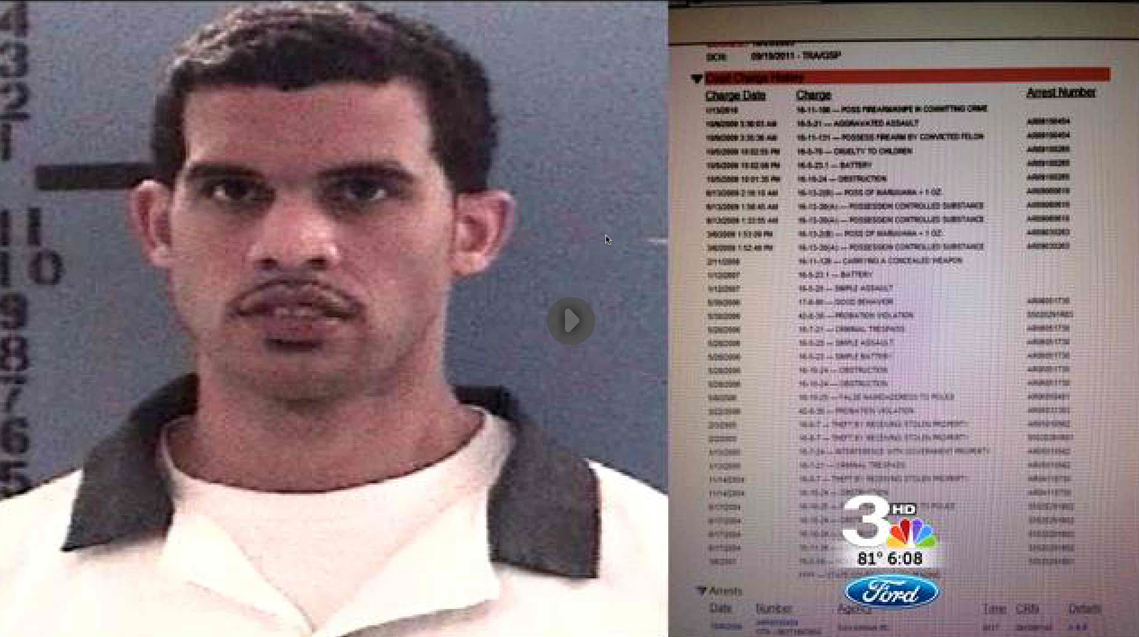 Two days after the shooting of 29-year-old black man Charles Smith, a wanted felon, by Savannah GA police officer David Jannot, new information is finally being revealed about both men, as reported by WSAV News, an NBC television affiliate in Savannah, GA.

It had previously been reported that Smith had served at least three felony sentences. Candid photographs apparently taken in prison reveal extensive tattoos, including one running from shoulder-shoulder under his neck stating “Cut Throat.” 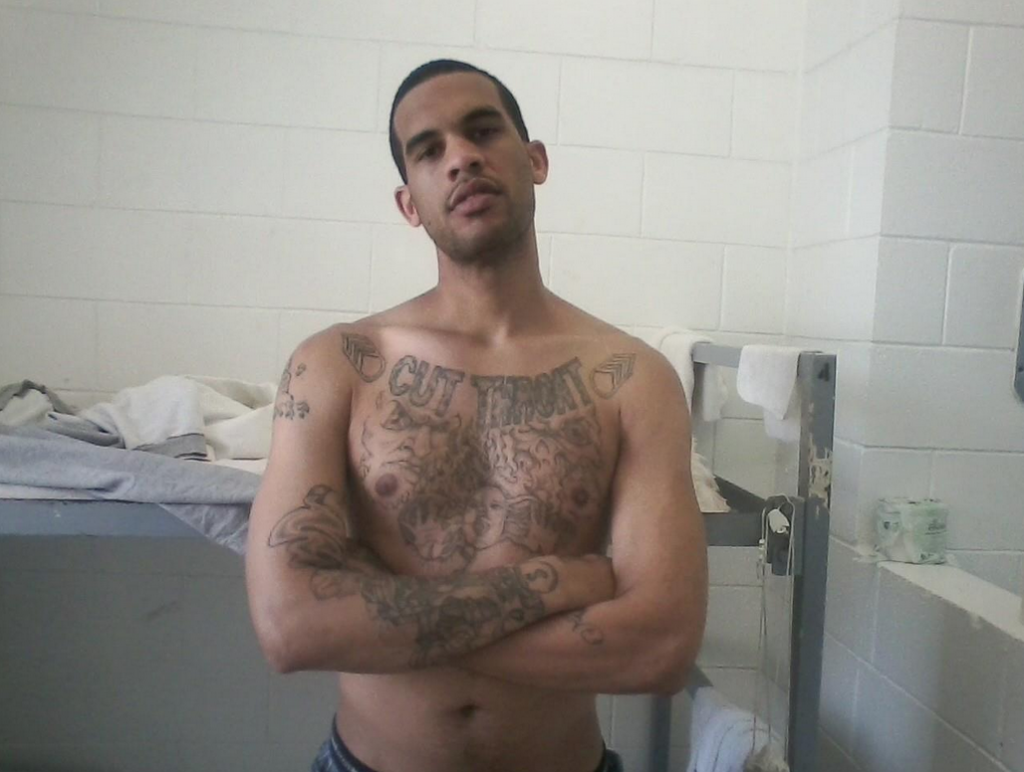 Smith had an extensive criminal history, including 16 different arrests over less than a decade, with charges including aggravated assault and cruelty to children.  It is worth keeping in mind that during this period Smith was in prison on felony charges for extended periods three different times, greatly reducing the time he had available to be on the streets to be arrested. (He nevertheless found time to father five children. Priorities.)

Particularly interesting was one arrest for “interference with government property,”  in which the arrest report indicates that after being placed in a police cruiser Smith “knocking out the back windows with his head”–eerily similar to his behavior following his Thursday morning warrant arrest by Officer Jannot.

At the time of his arrest, he had a lengthy list of outstanding warrants, including fleeing to elude, failure to stop, auto theft, reckless driving, obstruction, and traffic violations.

Perhaps most revealing, however, is Smith’s Facebook page, where he goes by the handle “MistaDee Dah Dun Dyeda.”  In the About section of his Facebook page it indicates: “”Worked at Robbery extortion and all types of f*ckry.” 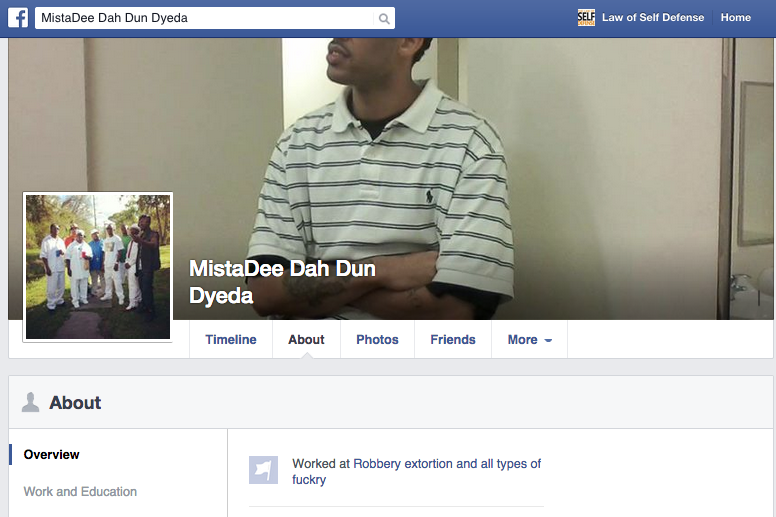 Other pictures, apparently taken in the same institutional setting as the tattoo photo above, show Smith starting off his day with a puff of something he refers to as “purp.” 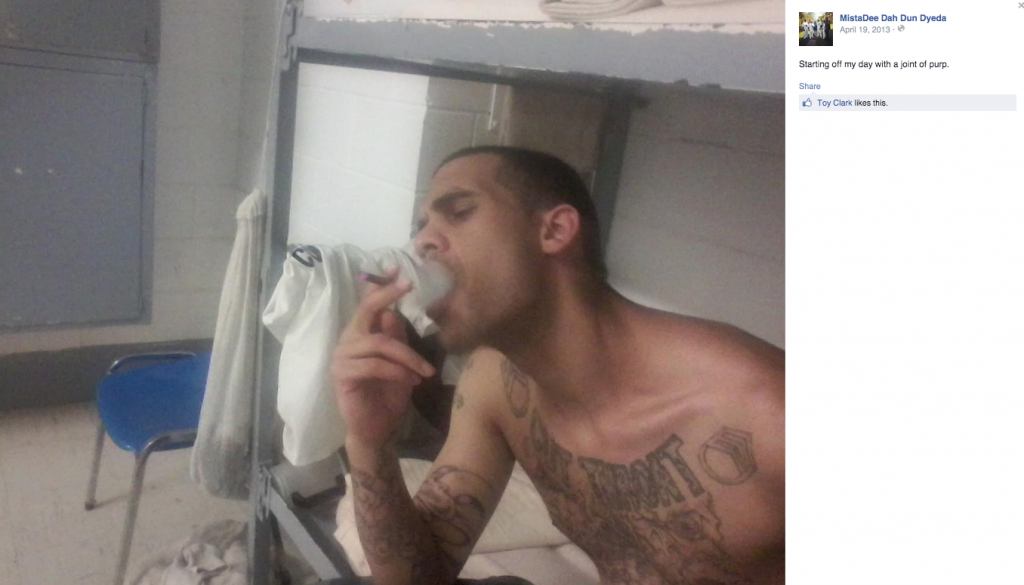 The Urban Dictionary defines “purp” as “Marijuana that displays purple hairs and deep greens.”  Didn’t know they allowed “purp” in prison, but it’s been a while since my last visit.

Here’s a few seconds of the WSAV television news story on Charles Smith:

WSAV TV News also noted that Smith apparently has a rap video in which he stars. In the video he can be shown handling a variety of what appear to be real firearms (it is, of course, a Federal felony for a convicted felon such as Charles Smith to be in possession of firearms or ammunition), as well as showing how he could conceal a pistol in his pants.

Officer David Jannot Had Some Poor Driving Tendencies, But Also Described As “Leader”

Officer Jannot, a 10-year-veteran of the police force, has three reprimands in his record for vehicle collisions, and apparently once missed a court date in 2010. He is also, however, described as a “leader on his shift,” as reported by WSAV TV news:

Remarkably, as noted there is still absolutely no indication I can locate of Jannot’s race or ethnicity, nor any photograph that would be informative.

UPDATE (7/20/14, 12:30PM EST): Commenter Sanddog helpfully provided a link to a Savannah Morning News article,
“Savannah urged to keep peace after police-involved shooting death,” that states: “Smith, who is black, was shot by Jannot, who is white, just after 11 a.m. Thursday on Augusta Avenue between Eagle and Cummings streets.” (emphasis added)

I apologize for my ignorance, but I am a homeschooling mom and do not keep up with the news during the week. Am I somehow supposed to be upset that the police shot this creature?

No. Share the benefit of this event in that he will no longer be able to victimize innocents and that we will save over $1M in incarceration fees, court costs, free lawyer costs, and the additional welfare costs for any progeny beyond the 5 he has already fathered.

No doubt my GA state taxes are going to support his progeny. Too bad this loser didn’t lose his johnson in an early skirmish.

Imagine how many he’d have spawned if not for the fact he was on “Georgia Main,” no doubt doin’ the “down-low” with his cellie!

It gives a whole new meaning to, “Yo. I knowed him at prison.”

And who is to blame for that? (Hint: it takes two to tango.)

Oh, I’m sure all of those baby mamas were sweet, innocent things who will work hard to see that their children have everything they need.

Are you speaking of tacky sluts looking to crap out as many welfare meal tickets as they can or the stupid taxpayers who keep paying for this cycle?

“Smith, who is black, was shot by Jannot, who is white, just after 11 a.m. Thursday on Augusta Avenue between Eagle and Cummings streets.”

I posted it on the old thread yesterday.

If George Zimmerman was a “white hispanic” then wouldn’t this guy be a “white African American?”

I would say that it depends on whether or not he was born in Africa. If he was born here, he’s simply an American. 🙂

My nephew’s wife was born in Tanzania and lived there until she was about 10 years old. Oh, and she’s lily white. Doesn’t stop her from listing herself as African American on applications though. Confuses the hell out of those who finally meet her.

If he is, then the Media saying that is “Racist!”

Seems as those Smith’s mom, Penny Nelson is white

Next it will be considered the white mother’s fault, perhaps even a hate crime, for her to have turn her mixed-race son into a felon.

Lie down with dogs…

Is the mother in a wheelchair because she’s handicapped or just too fat to walk on her own?

At any rate, there sure are a lot of obese folks in those pics. Looks like walking around protesting might do them some good.

So prison “reform” these days means doing drugs and coming out as a member of a gang and/or radical Islam, all muscled up and ready to fight.

Maybe we should issue the gang members doing hard time a couple joints a day, and take away the weight rooms. Let them sit around stoned and playing checkers, if they behave.

Seems instead prison is a recruiting ground for the criminal/terrorist element. Surely they could stop the drug traffic in prison if they wanted to.

They can’t even stop cell phone traffic in prisons.

Why they don’t install jammers is beyond me, even if it does take special FCC permission, but then what do I know?

Install jammers? How do you think they smuggle the cellphones into the prison?

I saw what you did there! 🙂

If I had plans for that pun myself, well…now you’ve wrecked ’em

Thanks for the hint. I’m a little obtuse this morning. More coffee!

Maybe if felons were sent away for life, what they do or become in prison would be irrelevant to society as a whole. Or, perhaps set a minimum age limit for release, such as 70 years of age. If they make it to that age, release them to a minimum security half-way house where they get room and board and %50 per month walking around money as long as they do their part to keep the place clean. Let nature’s miracles of arthritis, heart disease, etc., become their cell doors and shackles. When they die, cremate them. It’s the cheapest means of disposal.

One strike, you’re out.

Going back many years, I had the ‘opportunity’ to speak with a felon whose sentence was reduced to 90 days with work-release privileges (more conditions to that sentence than I can recall… but he got one helluva good deal). If I recall correctly, it was something to do with drunk driving, but I’m not certain. But I know he took two extra jobs just so he could be out of that jail for nearly 18 hours each and every day. He was the one that told me a felony three-strikes law should go 90 days, 180 days and life without parole. If they can’t learn after the second time, they aren’t going to learn.

I only state this to demonstrate that SOME felons can, and probably should be allowed to, reintegrate into society. He learned after his first strike, and I’d like to think many others learn after their first strike.

Enjoy that thought. It does not reflect the reality or the destiny of the self-made ghetto demographic, however.

p.s. I was speaking of violent felons, not traffic code violators.

I am starting to like the idea of expanding execution to include lesser crimes myself.

Starting to see the light by turning out the lights for others. That’s very ying and yang, or sumpthin. LoL.

The problem with down-marketing execution is that if police or DAs demonstrably engineer convictions on the thinnest or most tainted of evidence for the most egregious crime – murder – then they certainly are suspected of doing so for lesser crimes, even if in fact they largely don’t.

There’s also historical reason for one to be cautious in sanctioning the state to adopt a general policy of harsh penalties: Even in the seemingly most enlightened Western societies, “us” can become “them” in a heartbeat.