When will this end? 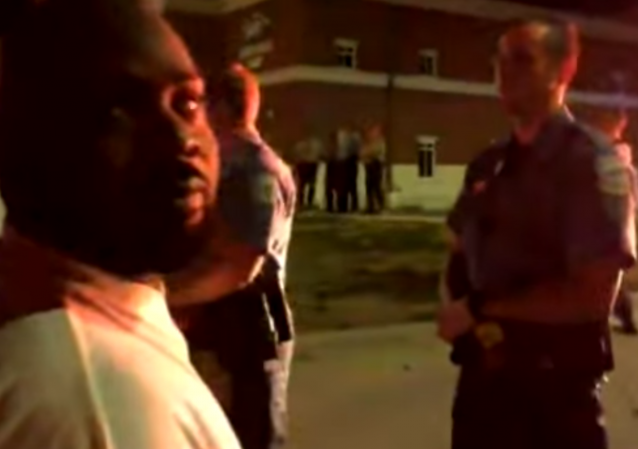 Although Ferguson is no longer taking up primetime news real estate, violent confrontations with law enforcement persist. Last month, protests erupted in the St. Louis suburb of Ferguson after Michael Brown was shot and killed by a police officer.

Thursday, protests (they’re still protesting the death of Michael Brown) got nasty as protesters took issue to cops wearing “I am Darren Wilson” bracelets. Wilson was the officer responsible for shooting Brown. According to the Daily Banter:

This march also comes on the heels of reports that Ferguson police officers have been wearing bracelets that say “I am Darren Wilson,” a reference to the officer who shot and killed Mike Brown, and who is currently the subject of a grand jury investigation into the killing.

The following video (also from The Daily Banter) shows protesters less than pleased with cops wearing the “I am Darren Wilson” bracelets. (Language NSFW):

The Daily Banter reported Ferguson Police Chief Jackson held an explicative laden press conference and then proceeded to march with the protestors. That went about as well as you’d imagine and law enforcement had to move in to protect Jackson.

I would think wearing a Darren Wilson bracelet while “serving and protecting” during a protest of the killing of a teen by Wilson would upset the protestors a tad. Pretty insensitive and foolish actually. Then again, I think there should be an order to shoot looters during said “peaceful” protests. Jackson should quit (appeasing) while he is ahead…nothing will appease these protestors except Wilson being arrested, and found guilty of 1st degree murder and sentenced to death. That is probably not going to happen and the people who have actually seen all the evidence (including video and eye witness accounts that did not make the news) probably know this as well.

Have you looked at the Daily Banter? WTF are you citing a story from some liberal rag? Might as well cite the Daily Kos.

I would think having this story in a liberal rag would indicate that the general public is becoming more aware of the motives of these “peaceful” protestors. There isn’t going to be much sympathy for their “cause” if they keep looting and destroying their town. Taunting the police isn’t going to bode well for them either. I would not want to be anywhere near Ferguson when a final disposition is issued regarding Wilson and it is found that it was a clean shoot. I will also be curious to see what percent of these folks vote in November. Beefing and moaning because they have a white mayor and majority white city council and white police chief, in a town with a 67% black population, is no fault but their own.

The latest rounds of riots … that is peaceful protests … started when the candle laden Mike Brown memorial started on fire. Instead of putting it out, these “peaceful protestors” started recording the fire and went door to door telling people that cops started the fire.

Eventually they backed off the claim that cops started the fire Instead saying that the cops stood there and let it burn. This while one of the protestors recorded the fire for 11 minutes, when as Ron Johnson said in his presser–if they got a cup of water and poured it on the fire that would have ended it.

The peaceful protestors then went on to look a beauty shop. After that they were converging on a pizza parlor when the owner pulled a gun.

Nevermind all the peaceful chants that were in no way baiting police.

Can’t imagine how that caught afire. Must have been the cops – those white devils!

He was convicted of reckless homicide, officials say he didn’t tell them

James was subcontracted two weeks after the killing on August 9 as authorities were condemned for failing to employ senior figures of ethic minorities.

So they hired a “senior figure” who was an “ethic minority” for a $155-an-hour job and he turned out to be a convicted murderer?

Well that worked out well, didn’t it?

So this guy gets a high paying job after lying about his background? In a real world he would be arrested for fraud. But they will probably let him go and give him a going away bonus.

Is it insensitive to ask the race of the person he killed?

“He was convicted of reckless homicide, officials say he didn’t tell them.”

In a lot of states they actually write these things down in what’s called a ‘criminal record’ so you can look people up. True story.

Sure, lots of private companies run those background checks, but this is the police!

But Eric Holder says that such background checks are RAAAAAACIST.

And, apparently in this this case, a minority guy lost his job because of his criminal past.

Ergo, by HOlder logic, we have to stop keeping criminal records. See, it all makes perfect sense…

The DOJ Community Relations Service seems to be poking a hornets nest… I am sure they have the best of intentions, but things just keep rolling downhill.

Best of intentions? To promote what particular agenda?

They need to pack up, go home and stop inciting the population.

I guess I am not good at sarcasm…sorry bout that.

“You have to believe me, this was a stupid decision but I did it with the best intentions.

There is probably some GOTV Democrat keeping things stirred up, with the crescendo being when Wilson is not prosecuted, a few days before the election.

Bill Whittle lays it out clearly.
“

“there is in fact a racial war of violence and hatred in America … white racism is not tolerated, but black racism is the toxic glue that holds the progressive movement together”

Just like the fully justified shooting of another black criminal thug “energized” (= “stirred up”) The Community for the 2012 election, lo and behold, here’s another election.

Ferguson, Missouri will remain a mess so long as ‘Barack Hussein Obama’ (or whoever he really is) remains in high office, and Al Sharpton is considered anything other than the criminal scum that he is.

JackRussellTerrierist in reply to TheFineReport.com. | September 28, 2014 at 1:26 am

Ferguson is going the way most underclass black cities and towns go, and that’s down the toi-toi. Businesses are pulling out and housing prices have plummeted. The mob is demanding that the stores they looted and burned be rebuilt or else they’re going to riot and the other side had better bring an army. What they don’t realize, among a thousand other things, is that Ferguson isn’t worth fighting for.

Gosh, who would have predicted all this would happen? It’s not familiar at all; no, not at all.

France warned its citizens about travelling north of St Louis in December . They said the mini bus from the airport is safe however .

France cares about St Louis sentimentally as they founded the city. They must be looking at the historical similarities to Haiti .

How long does this go on? It is election motivation, so it goes on until the election.

I have an idea – close down all the stores in Ferguson and let these lawless animals walk 20 miles for a cup of coffee or a pound of sugar. Time to stop coddling the masses. Time to let them know just how bad the consequences of their actions can be.

Now the Grand Jury will hear a second case involving Darren Wilson. The other players are Nick Zotos, defense attorney, Christophe Brooks, defendant…Zotos wants the marijuana distribution charge against Brooks dismissed because he doesn’t expect Wilson, who did not attend the preliminary hearing, to show up in court.
With respect to all you legal types,, this is really confusing. Just another game? When will this end???