Enterovirus 68 May Be Causing Polio-Like Illness in Children

Enterovirus 68 May Be Causing Polio-Like Illness in Children 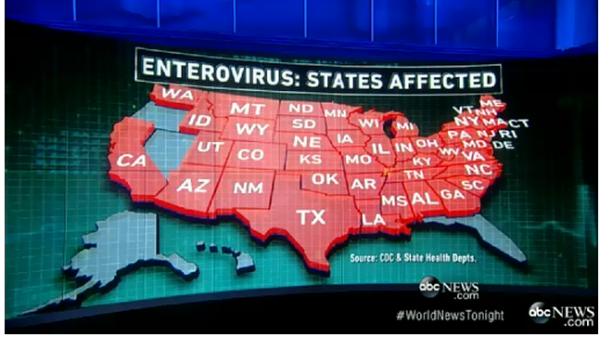 I have been following the outbreak of Enterovirus 68 closely. An awful trait of pathogens is that the more rapidly they spread, the nastier their health effects can become.

It appears Enterovirus 68 may be following this pattern. The Centers for Disease Control and Prevention is checking into reports that limb weakness and paralysis in nine children may be related to the far-reaching outbreak of the respiratory disease.

The CDC released a statement today saying nine children in Denver had reported a neurologic illness that led to some limb weakness or paralyzation. All of the children had reported having a kind of respiratory virus before showing symptoms of limb weakness.

Dr. Larry Wolk, the chief medical officer and executive director for Colorado Department of Public Health and Environment, said that the children affected range in age from 1 to 18, with an average age of 10.

“It is a spectrum of arm or leg weakness that can be as mild weakness or as severe as paralysis,” Wolk said. “What ties them all together though are findings of spots or lesions in the grey matter of the spinal cord on MRI scans.”

Medical officials have not determined whether the Enterovirus 68 virus caused the neurological symptoms, but the CDC is asking other medical workers to report any similar cases as the outbreak of the enterovirus 68 continues to spread throughout the U.S.

This news caught my attention. Earlier this year, as many as 25 California children we reported to be suffering from a mysterious, polio-like virus capable of paralyzing limbs.

The first known case appeared in 2012. Sofia Jarvis in Berkeley began to experience wheezing and difficulty breathing. The 2-year-old spent days in the intensive care unit at Children’s Hospital Oakland. Doctors thought she had asthma.

On a follow-up visit, her mother Jessica Tomei, 37, realized something else was wrong.

“As we were leaving the doctor’s office, I noticed that she went to grab something with her left arm and she stopped, midway,” Tomei said.

Eventually Sofia was brought to Van Haren’s clinic with “a unique set of symptoms.” She was treated with steroids and intravenous immunoglobulin therapy, used to reduce the severity of infections by giving the body antibodies to protect against bacteria and viruses. “None of it helped,” said Van Haren, a neurology professor at the Stanford University School of Medicine.

“He told us right away that the prognosis was really poor and that she’s not going to get better,” Tomei said.

The diagnosis proved correct. Today, at age 4, Sofia’s left arm is paralyzed and she has some weakness in her left leg as well as slight breathing issues.

A USA Today video summarizes the information available on the California outbreak.

There is not enough information to determine if the California infection is related to what is being observed after Enterovirus infections. However, the similarity is disturbing.

Sadly, it appears that the virus may have taken the life of a 4-year old.

A New Jersey pre-schooler is dead after suffering an unidentified illness, and the Centers for Disease Control and Prevention will test to see if the now-infamous enterovirus D68might have been the cause.

As CBS 2’s Christine Sloan reported, parents at the Yardville Elementary School in Hamilton, New Jersey, were shaken and saddened Friday. Health officials said a 4-year-old who attended the school for pre-school died early Thursday at home.
…The 4-year-old boy was identified in a call to parents from the school as Eli Waller.

When I was young, the worst infection I had was chicken pox. Truly, those seem like the good old days.

Now, today’s parents seem to be facing a new version of an old plague that threatens their children.

Expect more of this with our open border and no medical screening. But it’s more important to appease the illegal immigration supporters than to have a healthy population.

0bama calls terrorism “man caused disaster,” so since this is caused by open borders, can we call this a “man-made epidemic”?

Is this virus the next cause célèbre for Hollywould and the Beautiful People?

It’s an inconvenient truth that the Obama administration is illegally withholding information about where they’ve transferred the illegal immigrant children that they’ve illegally allowed to enter the US without adequate medical screening.

I know that it is heresy to openly say it, but if/when it is shown that the source of this and other diseases [we already have confirmed drug resistant TB] is the army of illegal invaders deliberately invited, not screened, and scattered and concealed around the country by the regime; it is not a matter of an accident but of deliberated, premeditated intent by those in power over us.

Paralysis and death, and the susceptible population appears to be the young. Pardon my possible paranoia, but could this be a bioweapon attack? It certainly fits one of the classic war-game scenarios from the Cold War era.

Don’t forget that Thousands upon thousands of Muslims from places like Somalia and other cesspools are being brought here by Obama. How long before Ebola is allowed to spread here thanks to our Muslim presidents goal of infesting this country with Millions of illegals and Muslims.

Just the ‘Open Borders Flu’. “Nothing to see here! Move along now!”
A little “Fundamental Transformation” every now and then can be a good thing.
Like the Spanish Flu Pandemic of 1918, or the Bubonic Plague. Whats a little Pasteurella Pestis between friends? Or Treponoma Pallidum? Or Nisseria Gonnorhea?
Comrade Barack knows better than you whats in your best interest.

According the my personal neonatologist, enteroviruses are in the family of polio viruses.

Her viewpoint is that those children who are having serious problems from this virus are the children, largely, of the “anti-vaxers”, who eschew polio immunization of their children.