DOJ, Democrat Elijah Cummings spin together for the IRS

DOJ, Democrat Elijah Cummings spin together for the IRS 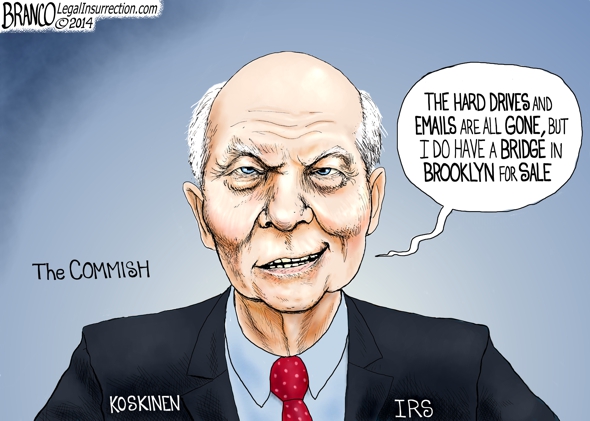 Just when you thought that the IRS scandal couldn’t get any worse, the editors of Investor’s Business Daily have a new bombshell to offer.

It seems the Department of Justice has been working with Maryland Democrat Elijah Cummings, but not to uncover the truth:

DOJ Working With Elijah Cummings To Protect The IRS

An aide to the attorney general accidentally calls the office of the House Oversight Committee chairman, asking for help in spinning the defense of the agency whose head just said they obey the law when they can.

We have commented many times of the all-too-cozy relationship between the IRS and Democratic members of the House and Senate, with members writing to the agency demanding that specific conservative groups and political action committees they find particularly irritating be subject to the “special scrutiny” that the Tea Party and other conservative and religious groups were subjected to in the ongoing scandal.

Of particular interest to us has been Rep. Elijah Cummings, D-Md., ranking member on Rep. Darrell Issa’s House Government Reform and Oversight Committee, who has made every effort to keep the committee from finding out the true extent of IRS corruption and abuse of power in its targeting of conservatives…

Now we have Brian Fallon, a former aide to New York Democratic Sen. Chuck Schumer and a communications aide to Attorney General Eric Holder, who mistakenly called Issa’s office thinking it was the office of Cummings and asked for help in leaking documents to selected reporters for the purpose of creating media spin before Issa and his committee could make them public.

As Jonathan Strong reports at Breitbart News, now the subject of an IRS audit, a letter sent by Issa to Holder about the call “describes Fallon as ‘audibly shaken’ when he realizes his request to leak documents to help get ahead of news stories about them was mistakenly made to the very office he was seeking to undermine.”

I’m old enough to remember when the press would cover a story like this.

As mentioned in the article above, this story was initially reported by Breitbart News, which is now being targeted for audit by the IRS.

Why, you would think G-d himself was in the Karma Control Room pulling the levers and twisting the knobs. :p

Isn’t it adorable that despite unhinged maniacs like Cummings and Reid being the face of the democrat media coverage so often these days, their party still think it’s a great time to push for giving Congress unlimited and totally arbitrary control over campaign finance?

Oh, and does anybody else think that if they gave Oscars to casting directors and the IRS scandal was turned into a movie, someone would be getting one just for flawlessly representing everything Americans fear and despise about the IRS with Koskinen? And probably a best supporting actor nomination for Koskinen himself?

The judge in the civil cases should demand the Commissioner come to court personally to explain why it was “too much trouble” to comply with his orders – and then put him in jail for contempt until he does.

That will wipe the smirk off his face, at least.

Why wait ? There is a jail in the Capitol.
The House Sargent-at-Arms’ job isn’t completely ceremonial.

You’re old enough to remember when the press would cover a story like this, I remember when an attorney general would lose his job.

No one cares about Elijah Cummings, he’s sort of the House Rapper – knows lots of words and just strings them together – there’s not much there and everyone knows it. Your basic windbag whose constituents should be embarrassed, though, we are talking about Maryland here.

Eric Holder is a different case. He may well be the single most corrupt and corrosive person in Washington and, by virtue of his position, the greatest internal threat to the country. At the very least he should be disbarred and in a Federal lock-up by now. It will be a true indictment of our system of government if he survives and suffers less. I expect there will be little suffering.

Like the fictional Democrat Clay Davis, in “The Wire,” Cummings comes off as a buffoon, but when cornered, these buffoons turn into pirañas. This old clown knows where the bodies are buried all over Capitol Hill, and he’s probably got the shovels, fingerprints and all.

Guys like Cummings are triple-coated in Teflon®, both electorally and politically.

I still think the scandal isn’t the point. The point is that the policy is still in place. And that will cost seats.