Does same thing over and over again

Does same thing over and over again 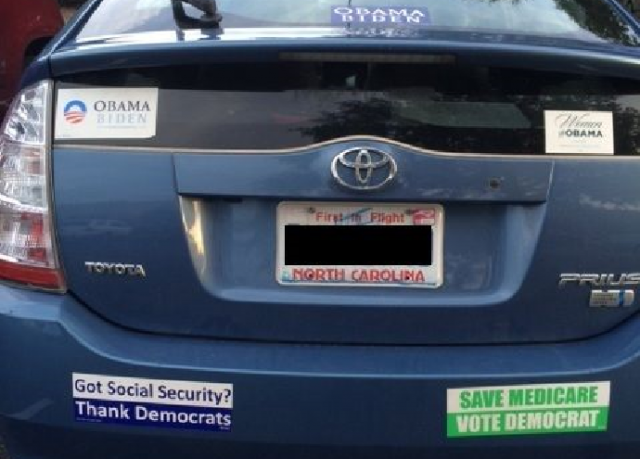 Here’s a couple who wear their Liberalism on their sleeves.

I doubt you could explain to them the irony of crediting the Democrats with two programs that are on a bullet’s trajectory to insolvency.

I’m still a daily reader at LI…keep up the great work!

Social Security has a negative rate of return for many people contributing to it, and in the best of cases the rate of return is in the 1.5% range… hardly anything to brag about when the broader securities market returned in excess of 20% last year.

And Medicare loses over $100B a year to fraud, waste and abuse.

On a related note, did you see the article yesterday about the leak of the “Senate Handbook” which describes the Senate rules for how they can spend the $3-4 Million each Senator gets every year to run his/her staff?

Got Social Security? If you paid into it, why not? If I put money in a banking account, am I not allowed to draw it out as needed? It’s not as though SS is a “gift from the Democrats”.

Of course, to some people who have not paid in or paid in very little, it is. Yea …. thanks Democrats!

Many people don’t understand the underlying purpose of SS.

Partly that’s because politicians sold it and use it for their own purposes which may or may not relate to the truth of the matter.

SS wasn’t really meant to provide a retirement. The problem that started happening during the depression is that a lot of women and some men were living past their working years and their family no longer had the means to provide for them in their old age. So the government was faced with having to support a lot of people in poor conditions and it made the country and the Democrats look bad.

The solution was to force everyone to contribute at least something towards a fund to provide for those who wound up too old to work and who’s families could not or would not provide for their care in their old age.

As time went on more and more families let SS take the slack and the program accordingly grew till now most of the lower and lower middle class rely on it as their primary means of support past their working years.

What’s made it worse is the increase in life expectancy and the labor saving devices that have allowed many people to live far past the normal years of retirement and able to stretch further into senescence which results in even greater expense.

Then there’s what to do with those who don’t need it. All are forced to pay into it and means testing is almost non existent so you have millionaires or at least very well off people drawing their SS. This makes it look better than it is for the majority of the recipients.

Top that off with some bright spark’s idea of using SS funds to provide assistance for those who become unable to work before the normal retirement years and add in Government workers knowing all the ins and outs of filing claims and we have a flood of people supposedly unable to work and drawing thousands of dollars a month when their inability to work is questionable at best.

And that’s the situation as we have it today. A reasonable solution to a terrible problem for old people turned into a scam and money pit by greed and laziness.

cures are to start wading through the SDI claims with a buzz saw and start tracking fraud, means testing for SS recipients and opt out provisions with mandatory funding levels for the young.

We can’t just dump the program as too many justifiably require it for their daily living and I can’t imagine a lot of people being happy about seeing their Grammaw eating cat food or tossed out of her home of 60 years. At the same time we have to demand some accountability and some reasonable rules to be followed. But hey; it’s a government program, what do you expect?

People who pay little and get much … I have a problem with that. I keep on hearing [don’t know if true] that illegals can bring their parents, etc. into the US who haven’t paid a dime into the system, and they can collect. Is that true?

I agree that fraud needs to be minimized. I am absolutely appalled at these “law firms” who help get healthy but lazy people on SS disability. It’s a freakin’ cottage industry! If the gubmint decides to deny those that paid in a large sum to the system because they behaved responsibly, God help the gubmint … news at 11.

A person with benefits in the highest bracket would have to increase their earnings $35,000 to increase their average by $1,000 and thus increase their benefits by $150. The combined employee and employer FICA tax used for OASDI is 12.4% or a total of $4,340 on $35k. In other words, the high salary people pay $29 dollars in order to raise their benefit $1. In times of normal interest rates, this is almost three times the cost of a private annuity

The higher paid workers support the system but you want to screw them more with means testing? Capitalism depends on savings but you want to encourage everyone to retire broke?

We must repair our entitlement system but not by looting even more from the people who have done the most to sustain it.

This lady (note women for obama sticker) should have one saying:

And pointing at the Obama Biden sticker.

GOT SOCIAL SECURITY which has:

1. Dug us into $17 trillion in debt,
2. Led to inflationary spending and borrowing,
3. Devalued the currency,
4. Destroyed the personal savings of retirees
5. Force young people to subsidize a ponzi scheme
6. Empowers an unaccountable agency with the extortionary power to seize your business, your house and imprison you?

THANKS DEMOCRATS! YOU CAN BE PROUD OF THAT ALRIGHT!

The Social Security Trust Funds, which are part of the national debt, stand at $2.8 trillion. There are $2.2 trillions of debt in other government trust funds. These $5 trillion are taxes collected for a specific reason and spent as general revenue.

Entitlements are going to bankrupt us and need to be addressed but one cannot blame them for our current debt situation or inflationary policies.

You can find his words on video.

NO. BODY. In Washington does NOT get that we suicidally driving off a fiscal cliff. Everyone knows, and most of them can be found commenting on it.

But nobody will DO anything about it.

As we dug through Gibbon’s “Decline and Fall of the Roman Empire” we all said, “How the hell did they not see this train wreck coming?”

I know that someday, they will say that about us.