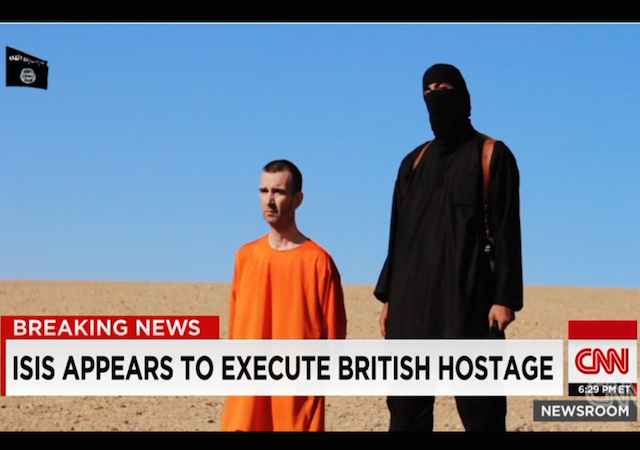 CNN is reporting that a third hostage execution video has been released by the Islamic State.

On Saturday, a video was posted to a website associated with the terror group claiming to show the beheading of British aid worker David Haines.

The militant says in that video, “We take this opportunity to warn those governments who’ve entered this evil alliance of America against the Islamic State to back off and leave our people alone.”

British officials said after the video’s release that they had sent troops to try to rescue an unidentified British citizen “some time ago,” but failed. They released no other details.

ISIS, which also calls itself the Islamic State, has killed thousands in Syria and Iraq as it presses a military campaign to establish itself as an Islamic caliphate. Witnesses report mass killings, beheadings and crucifixions.

Haines was kidnapped in March 2013 near a Syrian refugee camp. Intelligence officials are currently working to authenticate the video.

statement from the White House: “FORE!”

Statement from Cameron is even worse: “They say they’re acting in the name of Islam. That’s nonsense. Islam is a religion of peace. They’re monsters.” (Approximate quotation.)

Is Cameron really so stupid and ill educated that he can believe that “religion of peace” cr*p? Or does he imagine that if he keeps saying it, all those “British” Muslims will decide, “Hey, maybe he’s right; I guess I’ll be peaceful”? Does he imagine that by repeating the bizarre thesis that monsters acting in the name of Islam are actually anti-Islamic, he can dissuade devout Muslims from joining them?

I find it absolutely baffling that while civilization is (once again) under assault by the curse of Islam, the primary concern of Western “leaders” is to make apologies for Islam and facilitate its tightening grip over us.

cowardly news media here doesn’t have the balls to post the video they actually posted.
youtube and others deleting them as fast as they go up.
@conserv_voice is my twitter handle, link to beheading videos is in my profile there.
https://twitter.com/conserv_voice

won’t post actual link here as I am not sure if site owner is ok with that and don’t wish to go against his wishes.

We have a nice stock of thermobarics in our arsenal; we should be using them on these barbarians. They are the next best thing to a nuke in devastation, without all those nasty fallout/half-life problems.

The World conspiracy is not a theory.
Israel was a concept before it became a State and today is a State like no other. In fact it is the only Country in the World that has never defined its borders since its Declaration of Independence and now is ready to expand its territory through the use of any means. The Zionists and their Plan want the US forces to fight on behalf of Israel. Media and the many US politicians on payroll of Israel demand with one voice the US involvement against ISIS. But one should ask how was it possible for ISIS to grow so quickly, so organized and well-armed without having a State behind as sponsor. The chief of ISIS is Abu Bakr al-Baghdadi who spent time in a US detention camp before being released in 2009. In a World without coincidence, its sponsor is the same hidden hand responsible for 9/11. It seems straight from Hollywood the new strategy of filming horrific beheading. Spectacular clips broadcasted by ISIS just as spectacular as those planes crashing on buildings about 13 years ago. A particular sense of spectacle far more familiar to a Jew from Hollywood than a Muslim from the desert. There is no doubt that the Zionists have all the means to enlist mercenaries from all Countries and Islamic extremists without having to show their face.

Obama is aware of it and feels stuck in a quicksand.
The stalemate will go on until Jeb Bush will become US president, then …

How could anyone still believe the story of Osama Bin Laden?

Israel as a country goes back thousands of years. There were 2 kingdoms: Israel and Judah……

Wave theory and a whole lotta shakin’ going on with the lights out. Other than that, not much reply to.

LSD does not help one make sense.

His website is hilarious. He’s antisemitic, but everybody else gets a turn too. Conspiracy nut and self-hater. His acquaintances probably enjoy watching him get beat up at bars in Spain.

There was no Arab Spring …..but rather The Islamic Spring….every sectarian dictator taken down was replaced by A Muslim Brotherhood dictator/Islamic fanatic.

In Egypt, our one time ally with the Middle East’s large American built army,… our long time sectarian ally, Mubarak were taken down, arrested, tortured and caged. America has ever stood behind this outrageous behavior before…Mubarak replaced by Muslim Brotherhood, CIA asset Morsi. The Muslim Brotherhood with their Islamic extremists thugs proceeded to savage moderate Muslims and Christians…

500 year old Christian churches were destroyed across Egyot and a holocaust ensued..killing Christians and moderate Muslims..and Obama supported that…no dissent was uttered as the IslamoNazi’s returned to barbainism. Hundreds of thousand of Christians were raped, murdered…beheaded and savaged and driven from Egypt and other Muslim Brotherhood controlled countries. Nary a word from the president of the United Staes of America…not even a SMIDGEON. Our MSM press has stood by silently as Christians were murdered and driven from the Middle East by the the Muslim Brotherhood…..Only when reporters were murdered, beheaded like the many “Infidel” Christians…did the press finally deem to carry the story of murder and mayhem in the Middle East

Qatar, the state sponsor of terror and terrorists, the sponsor of the MUSLIM BROTHERHOOD, the sponsor of Al Jazeera-their media arm used to foment violence. ISIS, the army Qatar built, trained and armed…with the help of Barrack Hussein Obama is now 30,000 strong if reports are to be believed.

If Qatar were stopped..the terrorism would stop. Supposedly Qatar is an ally to America….they invest their oil returns deeply into our stock market, buy their way into our corporations, buy and fund our lobbyists and politicians, influence our think tanks like Brookings (14.5 million recently) our universities and corporations (Georgetown, Northwestern, Cornell, Boeing, Lochkeed , Exxon, among others) …and We the People of the USA have been lied to so this sub rosa takeover of the USA can continue under the Obama administration. Consider oil prices are 3x’s what they had been under George W Bush…this is a massive transfer of wealth to the Muslim Brotherhood and oil rich nations while America is stymied from drilling our own vast oil reserves by Barack Obama and others like the self satisfying Warren Buffet, with special deals and regulations for some and a different set stymying capitalism for most Americans. We are committing national suicide under Barack Hussein Obama’s policies…with the help of Qatar.

Finally, Obama facilitated a meeting with Karzaii and the Emir of Qatar…with the end result being headquarters for the Taliban being built in Qatar, reconstituting and strengthening the Taliban, shortly before Obama, unbeknownst to Congress or the Pentagon, released the Taliban 5 from Gitmo. Those five released to Qatar from Gitmo, were deemed by the United Nations as having committed crimes against humanity. Obama exchange those 5 for a deserter-traitor on his own, without Congressional knowledge or input…. and delivered them to QATAR, THE HOME of their New Taliban Headquarters..in Qatar.

Stand up America…join the campaign to STOP QATAR