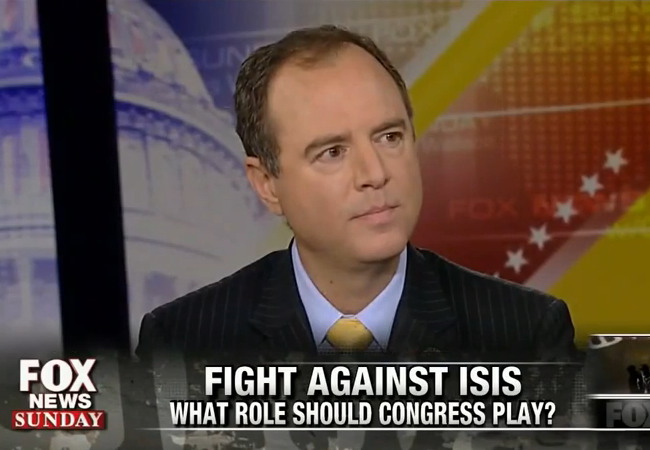 Congressman Adam Schiff of California appeared on FOX News Sunday today and said rather plainly that congress has pretty much given up on the rules.

Patrick Brennan of National Review has the details:

Asked this morning by Fox News’s Chris Wallace whether Congress is forfeiting its responsibilities by recessing before voting on whether to authorize a new war in Iraq and Syria, one Democratic congressman was blunt: “Absolutely,” California congressman Adam Schiff said.

A member of the House intelligence committee, Schiff argued “the president has said this is a war, this is going to last years, this is quintessentially something that the Constitution empowered only Congress to declare.

Last week, Schiff wrote a piece for Time Magazine on the same subject:

Congress Must Vote on War

In his address to the nation last week, President Obama made a compelling case for a concerted effort to destroy the Islamic State in the Levant (ISIL), a terrorist group that has spread chaos and bloodshed across Syria and Iraq. But even as the Administration has acknowledged that taking the offensive against ISIL amounts to war, it has paradoxically taken the position that Congressional approval—while desirable—is not required.
More
Rangel: It’s Time for a War Tax and a Reinstated DraftRepublicans Condemn Maine Gubernatorial Candidate for Controversial VideoGlobal Goal: Thousands March for Climate Change NBC NewsHe Had a Knife: White House Intruder Is Iraq War Veteran NBC NewsWealthy Gulf ‘Angel Investors’ Fund ISIS, Officials Say NBC News

The President has broad authority as commander in chief to defend the nation, but that authority is not without limit. It does not extend to situations like the present where the Administration has acknowledged that ISIL does not pose an immediate threat to our homeland. As one former constitutional law professor and then-Senator named Barrack Obama told an interviewer in 2007, “the President does not have power under the Constitution to unilaterally authorize a military attack in a situation that does not involve stopping an actual or imminent threat to the nation.”

The Administration has asserted that it has the requisite authority to act based on the 2001 Authorization to Use Military Force (AUMF) passed in the days immediately following September 11th—this reasoning is tenuous at best.

All right, someone please, anyone… has there ever been a declaration of war by Congress, or an authorization of military action by Congress, that has occurred without a request by, and approval of, the sitting President of the day? A single one?

Because this fellow and James Carville and so on seem to think that Congress is being chicken by not unilaterally attempting to pass an authorization the President hasn’t requested and has said he does not require, and I’m drawing a blank for any comparisons. What does the President have to do, threaten a veto?

I’m nature, since it is not an actual law that the president can veto it. Although if that were the case, congress would have to have a 2/3rds override, I think?

The so-called AUMF’s from 2001 and 2002 were signed by George W. Bush in his capacity as President, and any money bill for the cash to fight a war is also a bill that must be signed. etc.

It sure is a good thing we have a confirmed Constitutional Scholar and The Smartest Man in Any Room to help these guys as they struggle through this.

I realize the snark in your smartest guy in the room comment, but what is the basis? Has any sane human ever implied such?

The Party of War and Abortion. It’s probably not a coincidence that more wars are started during Democrat administrations.

To paraphrase Obama: started or expanded.

Really? How’d you come up with that calculation? And what do you mean by ‘started?’

You think Woodrow Wilson ‘started’ WWI? And that those German U-boats sinking American Vessels should have been allowed to do that without reply? And I guess you think FDR started WWII, and all those destroyed American Navy vessels in Pearl Harbor had nothing to do with him ‘starting’ WWII — which he only did because of Democratic-war lust.

But wait — wasn’t Republican Dwight Eisenhower the President who started the Korean War? And wasn’t it Republican Richard Nixon who prolonged the Vietnam War by attacking North Vietnam? And didn’t Ronald Reagan send Americans into Lebanon in 1983? And wasn’t George HW Bush Commander In Chief when Americans went into the Persian Gulf War? And let’s not forget George W Bush, who started the entire mess in Afghanistan and Iraq.

So I think your calculation above is awry..

And abortions are good for the country. Just think how much higher the welfare costs to taxpayers would be if thousands upon thousands of of unwanted fetuses under 3 or 4 months weren’t terminated, but continued to germinate into babies born to unwed mothers already unable to afford to care for two or three or more children. But if you’re so upset by at the termination of squiggly fetuses or hairy zygots, why don’t you and other like-minded citizens set up a Fetus Brigade Foundation, chip in a couple of hundred thousand dollars each and promise those pregnant women who don’t abort financial support. At about $30 grand a year to take care of those ‘unborn’ you could help support at least five or six ‘be-borns’ a year each.

Truman was the Korean War guy (easy to remember because of the fight between him and McArthur). Nixon was the one that got us (wisely or unwisely) out of Vietnam.

WW1. US involvement started with Woodrow Wilson in the White House, and ended with him still there. Democrat all the way.

WW2. US involvement (declarations of war, or trade in munitions and Lend Lease, take your pick), starts with FDR as C-in-C. Ends with Truman. Both Dems.

Korea. A more complicated situation, as the US was not at war with North Korea (or either of the other unofficial enemy combatants, the USSR or China), so no actual declaration of war was involved. Start, Truman (Dem.); Truman claimed authorization for armed support of the UN on the treaty by which the US joined the UN, and that treaty had been duly ratified by the Senate (though not of course the whole Congress, as required for a proper declaration of war… which wasn’t involved here). The UN had voted to oppose the Communist attack on S. Korea – the Communist bloc had screwed up big-time by boycotting the General Assembly and Security Council votes, and missed its chance to veto the whole “war”. End, Eisenhower (Repub).

Vietnam. Again, a messy situation. US forces become intimately involved under either Kennedy or Johnson, depending on how you look at things, but no matter, both were Dems. Ends with Nixon, Repub.

You’re a little skimpy on your facts t.swift.

The first US President to dispatch American troops to Vietnam — was Dwight D. Eisenhower. That was in in 1955, increasing their presence to about 900. He sent them is as to help Diem’s army, meaning they were keeping the peace by shooting moving targets.

And tho Nixon didn’t start the Vietnam War, he expanded it into the neighboring countries of Laos and Cambodia. Those are his war stepchildren, nobody else’s.

And Ronald Reagan was all over the map, literally, when it came to sending troops into combat situations: In 1983 he sent ‘peacekeeping ‘ forces to Lebanon; sent a battleship to shell Syrian positions there as well; same year he ordered US forces to invade Grenada. In 1982 he launched a series of air strikes against Gaddafi targets in Libya. Somewhere along the line he sent 2000 American troops to Panama. He also signed the immigration Reform and Control Act in 1986, continuing the war against American culture and the English language here at home.

And the two bang bang Bushes — I already went into those two. So overall it’s pretty close — both parties will use American force when necessary. For me that’s a good thing, when it’s done for the right reasons. WWII, you bet. Afghanistan, maybe – Iraq – no f%%king way.

I’ve been watching Ken Burns documentary series on the Roosevelt families, and FDR had to deceptively lead the isolationist congress by the nose to help Britain and France, under attack by Hitler. He outright lied to the American public about his intentions not to intervene with arms or or assistance to those allies, and then found ways to do it through sly maneuverings (sending 50 WWI American destroyers to Britain by calling it a ‘Lend-Lease’ program, and not aid, etc).

Roosevelt was a realist – he knew we were going to be dragged into the war one way or another, and did what he had to do, to make sure the country would be prepared militarily. To get that done FDR appointed two interventionist Republican leaders as Secretaries of War and the Navy, and with their help was able to rapidly build up our armed forces, and pass the nation’s first peacetime draft. But Roosevelt had personal charisma and charm and was a true patriot, and he was able to forge alliances with Republicans in that time of crisis. And of course once Pearl Harbor was attacked, both parties put aside petty bickering to do what was needed to protect the country.

But that was then, and now we have simpering idiots in both parties who won’t — can’t — put aside their partisan narrow mindedness to do what needs to be done in these times of crisis. And until we can forge a national consensus at the middle, all the quibbling idiots at the Left and the Right will continue to screw up this country.

A Pox on Both their Houses!

Doesn’t the war powers act allow the president to conduct military operations for up to 120 days? Then requires Congressional approval?

In his address to the nation last week, President Obama made a compelling case for a concerted effort to destroy the Islamic State in the Levant (ISIL)

The compelling argument Obama must make is to Congress, not to “the nation”. The electorate doesn’t vote on declarations of war.

In 1941 FDR had it easy, as both Japan and Germany had already declared war on the US a few days before FDR asked Congress to reciprocate. Merely attacking US forces doesn’t make a Congressional declaration of war automatic. US ships had been sunk by Japanese aircraft or German U-boats weeks (or years) before the Pearl Harbor attack, but neither the President nor Congress had taken any serious action after those provocations.

“In 1941 FDR had it easy, as both Japan and Germany had already declared war on the US a few days before FDR asked Congress to reciprocate.”

Well, no Tom, you’re off on those dates.

And the US declared war on Japan December 7th, following the attack at Pearl Harbor, BEFORE the Japanese declaration of war was formally presented to the American government.

Would giving power to wage war to this administration be responsible of irresponsible? The comparison to giving a loaded gun to an imbecile comes to mind.