Blue-on-Blue Fights are so interesting. 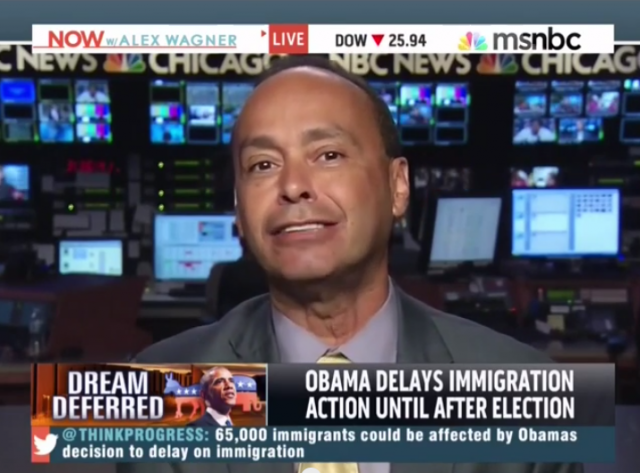 When it comes to red-meat quotes on immigration and calls for President Obama to use Executive Orders to bypass Congress and grant amnesty to millions, news networks know there is one go-to guy: Rep. Luis Gutierrez (D-IL).

Not anymore. Yesterday, Gutierrez expanded his political enemies list and went after all “conservatives,” of any party.

MSNBC guest host Luke Russert: That’s a very important point you brought up because in 2010 the DREAM Act, in the Senate, they weren’t able to get the cloture because five red-state Democrats would not agree to it.

In July, the LA Times reported on a speech that Gutierrez gave to the National Council of La Raza:

“We need to raise our voices, make ourselves citizens, sign up to vote and punish those who speak ill and criminalize children who come to our border,” Gutierrez said in Spanish to rousing cheers.

Looks like conservative Democrats now count among those he wants to punish.

Conservative Democrats? He may as well blame the dodo bird or sabre tooth tiger. Heck, there are few enough conservative Republicans…

It’s post-modern relativism. Compared to this racist Collectivist radical, someone like Joe Menchen is a Dixiecrat.

The only “conservatives” were Deemocrats who wanted to get re-elected in a red state.

Plus, he’s a lying SOS. There was nothing anyone could have done if Pres. ScamWOW pushed this issue in 2008.

It is my belief there is no longer a Democrat Party.

He’s not negotiating with anyone. He wants serial amnesty and nothing less.

I’m a firm believer in the 1st amendment. How else would these lunatics expose themselves in the public square to be ridiculed for the nincompoops they seem to be?

Is there any hope this will finally cause this nut to be ostracized by the dems? Prolly not.

Nah, he was probably put out there by Dems to push the radical enevelope further left, so they would appear rational and moderate in comparison.

Soopermexican is awesome! I hope he translates a LOT more of these La Raza supporting anti-American bottom-dwellers.

Because what they are saying is a HUGE tell on what their hidden agenda is – hidden from English-speaking Americans, that is.

We need him, and more of him!! MEMRI in the Palestinian jihad does yeoman’s work, as well. Here’s to more LIGHT to shine and expose ALL these leftist wolves in sheep’s clothing here in the US!

Gutierrez is of Puerto Rican descent. What opposition he can expect to face in his district, one of the most notoriously gerrymandered in the nation, is usually from Mexican Americans from Little Village or Pilsen.

I’ve always wanted someone to stick a mike in Luis’s face and ask him who he really represents as his district is notorious for exceedingly low turnout as well as its odd, shape. Luis is almost always re-elected with 75% of the vote or more- but with 60,000 fewer votes than other Chicago Democrat congressman also re-elected with 75%+ of the vote.

He does realize that he is an “American” congressman doesn’t he? Or does he? The man is a one trick pony and a poster child for radical. Guess that’s why the “good” voters of Illinois keep sending him back to congress.

He gets reelected because he represents what has been a consensus pick as a top ten gerrymandered district in the nation ever since it was first drawn after the 1990 census. An “Hispanic” district was formed by placing Chicago’s Mexican and Puerto Rican neighborhoods within a single district while not splitting up the district designated as to be controlled by west side blacks.

As the district lacks all cohesive identity it was made to order for a media darling and Democrat hack like Luis.

It’s simple. Think of the American children. Think of the implicit and explicit immigration policies which obfuscate the consequences of aborting around 2 million Americans annually.

Also, think of the circumstances which motivate large-scale emigration from second and third-world nations in Central and South America, Africa, and Asia. Think of what you are “protecting”.