Media bias is one thing. Rejection of reality is another. 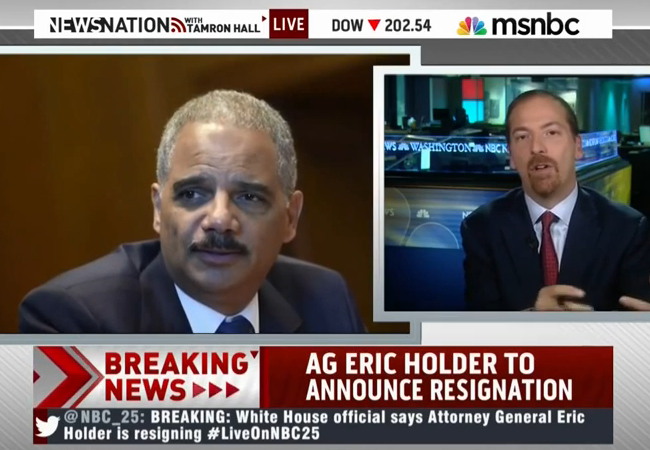 Upon hearing the news of Eric Holder’s resignation from the Department of Justice yesterday, NBC’s Chuck Todd took to the airwaves and claimed that Holder is a very non-political person.

Media bias is one thing. The utter dismissal of reality is another.

Brendan Bordelon of National Review has the details:

The host of NBC’s Meet the Press considers resigning attorney general Eric Holder — who once proudly declared himself an “activist attorney general,” called America a “nation of cowards” about race and took heat from his own White House for pursuing politically sensitive initiatives –  ”a very non-political person.”

“He did a lot of the tough stuff that you would say, ‘Hey, the attorney general has to do tough stuff, this is not a forgiving job, you have to do tough stuff,’” Chuck Todd told MSNBC’s Tamron Hall on Thursday. “But, what’s interesting about him, he is a very non-political person. And I think people used to mistakenly think that this guy was this long-time political operative who happened to be an attorney general. That’s not him at all.”

Twitchy compiled a number of tweets on the subject:

Possibly the dumbest thing @chucktodd has ever said? http://t.co/5lfiMwz9ax

chuck todd of Meet Depressed just said Holder wasnt political at all! Paging Jon Lovitz! Is it any wonder no one trusts the media hacks?

If you doubt that someone who covers national politics for a living could say such a thing with a straight face, there is video evidence.

Devoid of all logic and reason.

Chuck Todd is correct. Holder doesn’t do anything for political expediency.

Holder is a to the bone racist, anti-Constitutional, fearless proponent of fascism,racism,cronyism,and 4 or 5 other isms I am unable to to think of at this time.

Not a political bone in his body. He believes.

Holder does nothing for expediency – he’ll gladly be condemned as a political hack if it advances the Cause. Nothing expedient about the Long March.

Self-described political “activist” Eric Holder is not political in the same way that the Islamic State is not Islamic.

That’s when the speaker’s (Chuck Todd’s) bias runs so deep that a hardcore political agenda genuinely appears to be merely the earnest pursuit of what any sensible intelligent human being would seek.

Must be free LSD day at MSNBC.

Methinks the choom gang has a new member.

The most egregious statement is not that Eric Holder is apolitical, but that Chuck Todd is a journalist.

My day just keeps getting better! Love the responses!

The BIG Lie theory in practice.

lol, for you tweeters, this thread provides lots of ammo.

Does anybody but the most ignorant and brainwashed of our society even tune in to this idiot?

He has a point. In Holder’s world, the political spectrum runs from the moderate Left to the far, far Left. Ditto the New York Times. Everyone else is a racist reactionary extremist. That’s why they really thing they’re unbiased.

Oh, he’s also a racist ,and racism knows no politics.

Confirms my decision never to watch “Meet the Depressed” again.