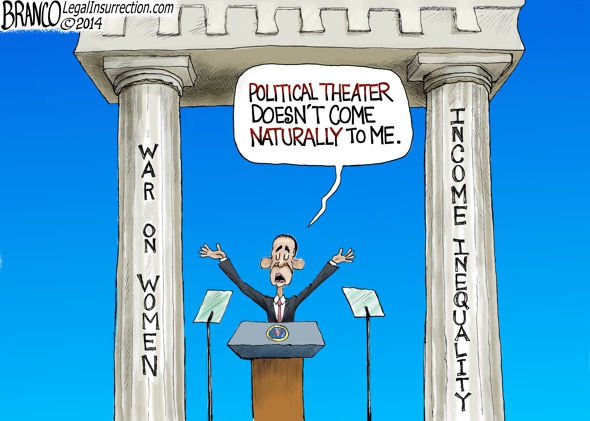 “I am not an ideologue.”

“I give myself a B+ as President.”

“I support the 2nd Amendment.”

“I can do anything I want.”

“Marriage is between a man and a woman.”

You guys don’t get it.
That’s his masterpiece. It’s all part of the same theatrical act.

The theater of history will cast him as a clown.

The “problem” with the cartoon is that it’s just describing the exact facts – the reality is so idiotic, there’s nothing to lampoon.

It was in 2004 that an unknown guy, Barack Obama, gave the keynote speech at the Democratic National Convention. All the fire and glitter was on the other side. The RNC was a smashing success and the Democrats needed a glimmer of hope that all this would change. The speech was hyped as only racist Democrats can. Because a black guy can give a speech, well, give him a crown.

In the first chapter of Dreams From My Father, Obama tells an unlikely story of how his father put a virulent racist in his place in a Hawaii bar with a speech. Obama says he wondered if it could be true and I breathed a sigh of relief. At the end of the chapter he runs into a guy, many years later, who tells the same story. It was true! It was true! Speeches save lives! Hallelujah.

I closed the book and returned it to the library.