The ISIS Barbarians within the Arab world’s gates now rule the day. 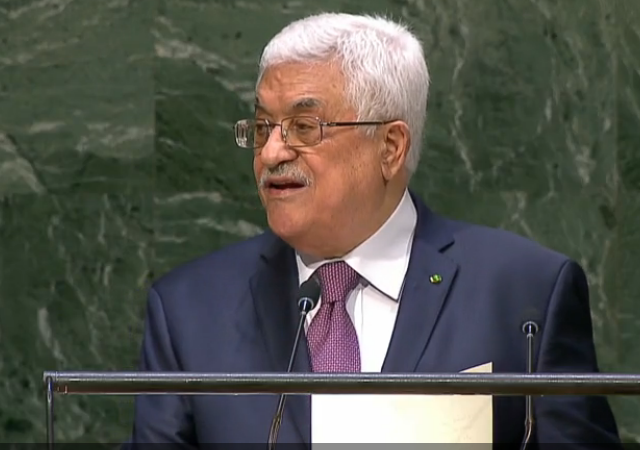 Mahmoud Abbas showed his hand today at the U.N., accusing Israel of genocide, getting a predictable reaction, via Times of Israel:

In his address, Abbas accused Israel of committing genocide in its recent conflict with terrorist groups in the Gaza Strip — calling 2014 “a year of a new war of genocide perpetrated against the Palestinian people” — and said that Israel was not interested in living in peace with its Palestinian neighbors.

“It’s a speech of incitement full of lies,” an unnamed source from the PMO told the Hebrew press. “That’s not how someone who wants peace speaks.”

Israeli Foreign Minister Avigdor Liberman said in a statement shortly after Abbas’s speech that the PA president demonstrated that “he doesn’t want and cannot be a partner for a logical diplomatic resolution.”

Here is part of the speech, in which Abbas heaps verbal abuse on Israel:

In Haaretz, writes Chemi Shalev, Abbas’ harsh speech at the UN is a new year’s gift for the Israeli right, burying the American sponsored “peace process”:

Taken at face value, Mahmoud Abbas’ speech before the United Nations General Assembly on Friday might legitimately be labelled “historic.”

Abbas more or less buried the “peace process” that the United States has been leading for the past two decades and charted a brand new diplomatic course for the Palestinians, one of confrontation rather than conciliation, in international forums instead of U.S.-mediated bilateral negotiations.

The Israeli government and its right wing adherents may be huffing and puffing in public over Abbas’ change of direction, but may privately they are filled with joy: Abbas just gave them an invaluable political gift, just in time for the Jewish new year.

Contrary to the positive speech that he delivered earlier this week to American students at New York’s Cooper Union College, Abbas’ target audience now wasn’t in New York or Washington but in Gaza and Ramallah. Abbas was not appealing to supporters of the peace process in Western public opinion, as he has in the past, but to the Palestinians’ “base” of core supporters in the Arab, Muslim and Third worlds, as well as Europe. He tried to shed his popular image as a Obama and Kerry’s poodle and to recast himself as bulldog who can be just as fierce as Ismail Haniyeh or Khaled Mashaal.

Abbas’ speech undoubtedly reflects pent-up Palestinian rage in the wake of the carnage in Gaza, as well as his own conviction that Israeli Prime Minister Netanyahu wasn’t, isn’t and will never be a partner for peace negotiations anyway.

But his address is also a product of his own frustration: the barbarians of Islamic State, as he described them at Cooper Union, have upstaged him and stolen his thunder.

The extremist Barbarians within the Arab gates, as an Arab journalist has described ISIS and similar groups, now rule the day.

Not just on the ground in parts of Syria and Iraq, but in the heads of Palestinian leadership.

UPDATE: This is an unusually harsh statement from the United States:

“Such provocative statements are counterproductive and undermine efforts to create a positive atmosphere and restore trust between the parties,” she said.

With ISIS and Taliban barbarity now so prevalent, with many hundreds of thousands of Arabs and Kurds (and Yazidis and Christians) in refugee camps or dead, it’s going to be hard for anyone, even the left-wing press, to take accusations of Israeli “genocide” seriously.

To hell with the Palestinians.

I know they are constantly fed this crap but at some point rational people need to speak up and say, “Ya know, this is the same old crap and it tastes like crap and you keep feeding it to us. Stop now.”

But if your reaction to a steady diet of crap is to say, “Thank you, may I have some more please?” then how is your bad breath my problem?

You are what you eat.

I’m surprised Abbas didn’t invoke the “apartheid” argument, which polled favorably for similar campaigns in the past.

“Words…just words”. Remember, they are the cheapest of things to Pres. ScamWOW. He sometimes pretends to care about the Constitution, the American military, the rule of law, your and my rights to chose, etc.

But you watch him to know where his treasures lie.

The sad reality is that until the Arab world is forced to live in peace with Israel that there will be no peace.

If you are going to quote Ha’aretz, at least state what it is. I’m sorry they have an English edition; I think they got the idea from the success of the English editions of the Chareidi papers. I know you meant it as “even they say so”, but please let the reader know that it is an ultra-left wing paper with few readers (and shrinking because of the disgust of some of its now-former readership), although it is possible it is of higher quality than the other papers, for what that’s worth. I understand that the English edition is even more anti-Israel than the Hebrew one.

If only the Israeli government would bring Abbas up on trial for the war crimes he personally has committed.