Going after the varied sources of funding of terrorism. 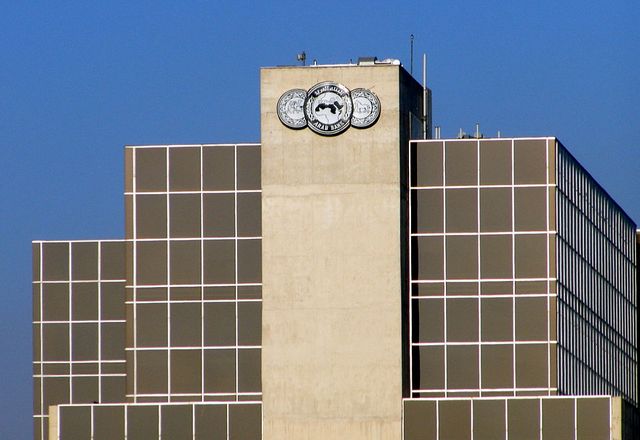 Yesterday a jury in a federal court in New  York found the Arab Bank – the largest lender in Jordan – liable for “knowingly supporting terrorism efforts connected to two dozen attacks in the Middle East.”

Arab Bank, a major Middle Eastern bank with $46 billion in assets, was accused of knowingly supporting specific terrorist acts in and around Israel during the second Palestinian uprising of the early 2000s.

The verdict is expected to have a strong impact on similar legal efforts to hold financial institutions responsible for wrongdoing by their clients, even if the institutions followed banking rules, and could be seen as a deterrent for banks that conduct business in violent areas.

The plaintiffs in this case, about 300 victims of 24 terrorist attacks, said the acts had been carried out by Hamas, and accused Arab Bank of supporting the organization by handling transfers and payments for Hamas members.

The Times quotes Jonathan Schanzer of the Foundation for Defense of Democracies on the significance of the verdict.

“What this has done is it’s made the effects of American law felt in far-off places, and that is significant,” said Jonathan Schanzer, vice president for research at the Foundation for Defense of Democracies and a former terrorism finance analyst for the Treasury Department. “I don’t think any country, any bank, would want to be cut off from the U.S. financial sector, and they’re going to start thinking very carefully about whether they accept financial transactions” even from people or groups who are not on designated terrorist lists.

The damages were not determined and will be decided at a future  trial.

Arab Bank will appeal the verdict. In her earlier coverage of the trial, Sharyl Attkission identified the issues that will be the basis of the appeal.

One strike against Arab Bank in the upcoming trial is its decision to withhold documents that the court ordered it to turn over related to customers such as Hamas and other terrorists and militant groups on the U.S. list of terrorist organizations.

Arab Bank claimed bank secrecy laws in Jordan, Lebanon and other countries bar it from turning over the material. But federal courts ruled the jury may infer guilt or wrongdoing from the bank’s failure to provide the documents.

Arab Bank has taken issue with a series of pretrial losses it has suffered in the case so far, claiming the court rulings are “inconsistent with controlling precedent as well as decisions of other district courts on key legal issues.”

Whether or not the appeal is ultimately successful the case and the verdict will add another level of accountability to banks.

In a profile of Nitsana Darshan-Leitner of Shurat Hadin, David Hazony explained her strategy. (The Arab Bank case was originally filed in 2004. While Shurat Hadin wasn’t involved in the actual litigation, it was behind the case.)

Through her nonprofit legal center, Shurat HaDin (“letter of the law” in Hebrew), Nitsana has spent the last decade and a half battling terrorism through civil lawsuits. Representing terror victims from Israel, the United States, Canada, Iran, and elsewhere, she files motions and seizes assets and sends warnings. She has become a menace to terrorists, putting them on their heels, forcing them and their sponsors to spend vast sums on legal fees, to stop using the Western banking industry, to smuggle cash through tunnels instead of using the banks.

In the process she has revolutionized the way the civilized world deals with terrorism. Governments that clearly back terror organizations—like Iran, Syria, North Korea, and the Palestinian Authority—have found their assets frozen, even turned over to victims. Terrorist groups, states that sponsor terror, banks that facilitate terror financing, companies that do business with terrorists—all of these have found themselves diverting attention, resources, and immense energies to dealing with high-profile lawsuits. Major corporations have discovered that they cannot operate with impunity.

What I’ve read about the case is that the jury saw documents itemizing payments of $5,300 to families for deaths listed as “martyrdom operations”.

It’s hard to misinterpret that.

So if this succeeds, will financial institutions participating in “Operation Choke Point” be liable for firearm-related businesses closing down or going cash-only (with all the risks that entails) after the banks closed accounts or withdrew lines of credit?

Those actions skirt awfully close to violating 18 USC 241 and 242. Could/will they be responsible for the consequences?