Who will ever trust Martin Indyk again? 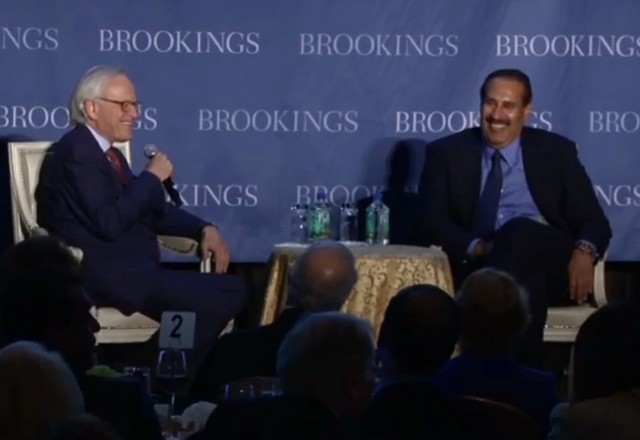 The New York Times earlier this month published an expose of how foreign money influenced think tanks. One of the subjects of the article was the Brookings Institution, its vice president Indyk and $14.8 million grant that the government of Qatar had given Brookings. A former scholar at Brookings cautioned that because of Qatar’s influence any report coming out of the institution is likely not to be the “full story.”

The New York Times didn’t seem much concerned with the implication of its reporting but some people did notice.

In Tablet this week Lee Smith pounced on the Times for not looking into the implications of what it reported.

Or maybe the editors decided that it was all on the level, and the money influenced neither Indyk’s government work on the peace process nor Brookings’ analysis of the Middle East. Or maybe journalists just don’t think it’s worth making a big fuss out of obvious conflicts of interest that may affect American foreign policy. Maybe Qatar’s $14.8 million doesn’t affect Brookings’ research projects or what the think tank’s scholars tell the media, including the New York Times, about subjects like Qatar, Hamas, Israel, Turkey, Saudi Arabia, and other related areas in which Qatar has key interests at stake. Maybe the think tank’s vaunted objectivity, and Indyk’s personal integrity and his pride in his career as a public servant, trump the large piles of vulgar Qatari natural gas money that keep the lights on and furnish the offices of Brookings scholars and pay their cell-phone bills and foreign travel.

Smith also observed that the Qatar connection made Indyk poorly suited as an interlocutor for both the Israelis and the Palestinians.

Of course, Hamas, which Qatar proudly sponsors, is a problem not just for Israel but also the Palestinian Authority. Which means that both sides in the negotiations that Indyk was supposed to oversee had good reason to distrust an American envoy who worked for the sponsor of their mutual enemy. In retrospect, it’s pretty hard to see how either side could have trusted Indyk at all—or why the administration imagined he would make a good go-between in the first place.

But there’s one particular point that’s particularly galling, Smith asks “why in the midst of Operation Protective Edge this summer did Kerry seek to broker a Qatari- (and Turkish-) sponsored truce that would necessarily come at the expense of U.S. allies, Israel, and the PA, as well as Egypt, while benefiting Hamas, Qatar, and Turkey?” Kerry’s support of the ceasefire deal that favored Hamas sponsored by Qatar and Turkey raised questions at the time. There  was an Egyptian ceasefire proposal on the table at the time. It’s possible (though by no means certain) that if the United States had supported the Egyptian proposal and brought international support behind it, that the war could have been over a month earlier before hundreds of more people were killed. Did Kerry listen to his compromised former envoy (who said he’d “consult” with the State Department after he resigned) and prolong the war by giving Hamas hope that it could get everything it wanted?

The corrupting influence of Qatar and its effect on the Middle East is something that needs more exposure.

One last note … when Kerry appointed Indyk, The New York Times ran an editorial that described Indyk as having “a long association with pro-Israel groups.” The mention was gratuitous but the suggestion was clear: Indyk might be too pro-Israel to be effective. Now that the Times’ own reporting has exposed Indyk’s ties to Qatar, will it ask the appropriate question in retrospect?

Qatar is a major competitor if the the US ever gets around to exporting lng . They are years ahead & have already stitched up west Europe particularly wimpy Britain.

They get a double whammy from Britain especially , which willingly backs Qatar Islamic Inc . It rounds up its’ working class soldiers & sends them off for Qatar.

Is anyone going to deal with the Nazi Opera – that seems to be the best description, and I don’t mean an opera about Nazis – “the Death of Klinghoffer” being played at the Met?

Shouldn’t the Met and it’s sponsors get some of their own BDS?

I recall Martin Indyk as the guy who wrote the stuff for AIPAC. Then he founded what appears to be a pro-Israel think tank. On the other hand, he was on the board of the horribly Leftist New Israel Fund, that like to go the Israeli Supreme Court and cause trouble.

Personally, AIPAC is kind of establishment. I prefer AFSI.