The depravity of the anti-Israel left on display. 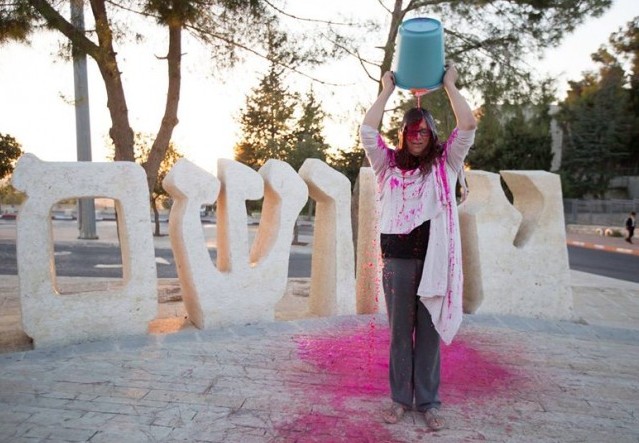 If you thought the “blood bucket challenge” performed by Megan Marzec, President of the Ohio University student senate, was a disgusting politicization of the ALS Ice Bucket Challenge, just wait.

A group calling itself “Jews Against Genocide” just performed the stunt at various locations in Israel, including at Yad Vashem, the Holocaust Memorial and Museum in Jerusalem.

The group’s Facebook page indicates it was formed in July 2014. That page also indicates it is a supporter of the Boycott, Divest and Sanctions movement.

The stunt is promoted at the website of the anti-Israel The International Solidarity Movement where it is noted that the group claims inspiration from Marzec.

Of course, they want publicity for this, so it’s a conundrum whether to provide them what they want.

But it is what it is, and you need to know about the depravity of the anti-Israel movement, including among some leftist Jews.

Sad, sick and ultimately dangerous people who, under it all, openly practice bigotry and incitement against Jews, no matter what they say.

Muslims use it on women all the time!

You can buy animal blood, but some states might require a permit to buy or transport it.

But, yes, pouring PEPTO BISMOL over their heads sends the right message: we are nauseating little pukes who will give you indigestion with our diarrhea ideas.

Pepto Bismol. Or leftover paint from some Code Pink activity.

Her Mom and Dad must be so proud.

Assuming that she is not a red diaper baby like Amira Hass.

I’ve been through Yad Vashem. How any Jew, or anyone else for that matter, could tour through this museum and see what happened to 6,000,000 European Jews, then pull a sick stunt like this is beyond belief.

She ought to have her head checked.

ANTI-ISRAEL ACTIVIST (LEFTIST-LOON) ATTACKS SANCTITY OF YAD VASHEM, DUMPS FAKE BLOOD ON HERSELF IN COURTYARD……. | | September 30, 2014 at 2:33 am

That is so sick as to be beyond comment. All I can say is that I hope that creature is on the watch list at Ben-Gurion airport to keep her (and whatever student of Leni Riefenstahl filmed it)out of my country.

I suspect she could be jailed for that here.

Hamas would not as kind as the Israeli’s were to a Gaza resident who pulled a similar stunt. These Jewish “protestors are sad, self-loathing, disturbed and dangerous.

The reality is that clowns like these don’t actually want to make the lives of the average palestinian better because that is not their goal.

If they TRULY wanted to make things better for Palestinians they would be doing all they can to get Hamas and the rest of the Arab world (including the Persians) to live in peace with the Jewish state.

The sad fact is these clowns hatred for Jews outweighs any compassion they might actually have for Palestinians.

This idiot is a reminder of the crazy women that used to hang around Charles Manson. Now, they hang around Obama.

Since they mispronounced several of the words they were reading from, that tells me that they are reading something that was written for them by outside leftists such as the International Solidarity Movement.