Aborted: California will not give birth to six new states

Aborted: California will not give birth to six new states 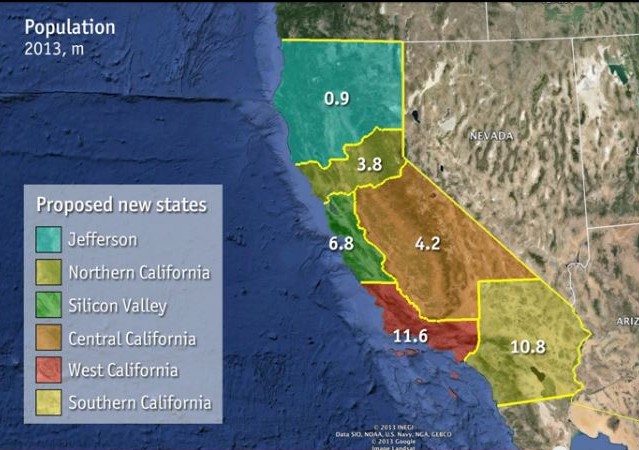 We previously covered the petition drive to put on the ballot this November a Proposition to split California into six states, Are six Californias better than one?:

The idea of splitting California into pieces is not new. The procedural hurdles are monumental, and perhaps insurmountable, but the idea doesn’t go away.

CAlifornia is too damn big to govern, and has differing regional qualities that would make sense to separate out rather than bury under one state government.

From a national political point of view, a break up would be a mixed bag. Yes, it might (might, not would) break the now near-permanent condition of all those electoral votes going Democrats without a fight.

But as separate states, wouldn’t they be entitled to two Senator each? The more Californias there are, the more Democratic Senators we are likely to have, although depending on how the split-up takes place, perhaps it would be more neutral.

Unfortunately, the Proposition will not be on the ballot because they fell just short of the required signatures, although there may be challenges to the count.

A proposed ballot measure to carve California into six states failed to qualify for the November 2016 ballot Friday after election officials determined that backers did not collect enough valid signatures….

The measure needed 807,615 valid voter signatures to qualify, and the Six Californias campaign turned in nearly 1.14 million in mid-July. But several weeks of random signature checks that ended Friday determined that only 752,685 signatures were valid – almost 15,000 signatures below the threshold needed to launch a full count of every signature.

Was it even a good idea to break California into six pieces?

They appear to be looking for a federal solution to a state problem. They could write a new constitution creating a federal state/state. Divide CA up into the six states, as proposed, each with its own legislature and taxing authority. The old CA Assembly in Sacramento would exist solely to parcel out the dollars for federal grants and aid and run the statewide agencies like CHP. The Governor’s office and the Supreme Court would remain. CA would continue to be represented at the federal level as before.

Was this aborted or did the gestation period just get extended?

We have learned from sad experience that bad ideas in California rarely go unrealized.

To be fair, premature births can create more problems than they resolve. The right course of action depends on the risk posed by the pregnancy to both mother and child(ren). If the children’s lives are threatened in vivo, then the risks of continuing natural gestation may outweigh the risks which accompany a cesarean section. Fortunately, for Californians, there are facilities in adjacent states which are capable of providing life-sustaining aid at a uniquely vulnerable moment in their evolution.

That said, I just caught a glimpse of the offspring devouring their mother for sustenance. It was almost as horrific as when the mother aborts her offspring for a sadistic tribute to her narcissism. But dividing geography, while often painful, and certainly consuming, is not equivalent to decapitating and dismembering viable human bodies in a progressively hostile environment.

I think I just deviated from the prescribed course, but who can fault me when dreams of abortion are in the air. This is a serious topic which cannot and should not be trivialized, despite efforts to dismiss or deflect its consequences. Yeah, I know. It can go both ways. I err on the side of life.

I don’t think this to be a bad idea, and I’m actually in favor of Texas largely doing the same thing.

Out of a California break-up, we would likely get at least 4 consistently Republican (if not Conservative) Senators, and likely at least two moderates.

The current Representatives would probably largely remain the way they are, or possibly swing a little bit more conservative depending on how the individual districts are reapportioned.

The odds are good that we’d see a net increase of at least three conservative senators.

It’s too bad it isn’t going forward, at least at this time.

Out of a California break-up, we would likely get at least 4 consistently Republican (if not Conservative) Senators, and likely at least two moderates.

I think spitting up California is a really bad idea to begin with, but if you want Republicans and conservatives to have a “legislated” voice in a statehouse and the US Senate, splitting into two, rather than six, is a much batter solution – Coastal California (West, Silicon, and the west half of Northern) and “Inland” California.

The problem with California is that the state GOP leadership is so weak and spineless that they make Boehner and McConnell look like the Rock of Gibraltar.

Having 12 senators from California would be bad for the country.

Those who understand the political demographics of the state know differently.

The democratic states would go bankrupt overnight as people would only need to move a short distance to move to a sanely governed state. It would actually be fun to watch as the democrats start pulling out the knives to gut each other fro the dwindling tax dollars, or if they decide to simply run their state into the ground like Detroit…

Imagine that. The “election officials” (which almost surely oppose splitting California) deemed that both the measure did not get enough valid signatures, and was Juuuusssst shy of the number necessary to require a full review.

Basically the electoral officials are claiming that 35% of the signatures collected were invalid, and then refusing to do a full recount because BY THEIR ESTIMATE petitioners fall short of the number required by less than 2.25%

That should be a lawsuit waiting to happen to force the election officials to review every signature. Those election officials had better be able to show a really good, valid statistical model which shows multiple audits of the full signature pool to justify that 35% number. Otherwise they’re going to get hammered.

Model, schmodel We know what the left does with models. Global warming models are a perfect example.

Recount and examine every last signature. Nothing less.

this is/was a stupid idea, and definitely bad news for the rest of the country, should it go through one of these days…

we need more Demonrat Senators in DC like we need an Ebola outbreak inside our borders, and, rest assured, instead of sending two morons back there, this plan would result in 6-12 idiots going back east, since i can see ALL 6 states voting blue more than red.

Why 6? Why not 11? Or 35? Los Angeles and San Francisco could be their own states, easily. I’m sure there are other bits that could be carved out. That might be the better way to do it, too – one piece seceding from the state at a time, instead of trying to break up the whole thing.

Redistricting is a short-term means to mitigate unwelcome effects of an unassimilated population, as we have observed that the electoral college is an imperfect firewall. The right action is to control the porous borders, and especially to end all elective abortion procedures (i.e. premeditated murder), which terminates around 2 million American lives annually. It is also necessary for parents to teach children their culture, religion (i.e. morality), standards, and way of living.

Maybe we need to figure out what Culture is first. What’s meant by “culture” in California, to California “elites”, is not morality or high accomplishments or anything like that, but food (often a combo of rice and beans with some spice) and maybe some folk ornament. Other than that… My perfectly PC friends joke that Mexicans they knew in school took Spanish to get a B.

Breaking up California would have been a good idea.

I did a quick analysis here:

Additionally, with four of the new states freed from the San Fransisco-Los Angeles axis, those four new states would instantly go from a far Left political environment to a centrist to conservative one.

The politics of the states would not remain static, though. Sacramento is dominated by Bay Area politicians, who are electorally supported by L.A. county. By confining the insanity to the state of “Silicon Valley,” the rest of the state would become much more conservative (even L.A., which is saying something). You’d have new states that were friendly to the sane and the conservative.

We could easily see “Southern California” gaining a lot of population due to is moderate to conservative (or at least libertarian-conservative) leanings, in addition to the presence of established infrastructure.

The state of “Northern California” could even be converted to a relatively conservative area if there is enough of an influx — it would contain Napa county and Sonoma county, but be balanced by Placer county and the other mountain/valley counties inland.

The bulk of the farmland, and control of much of the water, would be in the hands of GOP friendly “Central California” and would likely become a beacon for any and all farmers once again. They would control the water, which would give them a heck of a lot of power. What would happen to the Owens valley (from which L.A. stole its water), would be… interesting.

Heck, even “West California” would see a significant slowing of its Left-ward drift due to not being a border state anymore, as well as being free from San Francisco.

Wait, where is the state of Aztlan?
I’m all for letting the Bay Aarea boil in its own juice, though.

I thought there was talk to break it up into three pieces. There’s also talk about New York splitting off from NYC and Northern & Southern Florida creating two States. Splendid ideas all.

What we really need is an initiative that attacks the Democratic monopoly on power. How about requiring gov to pay for each years accrued pension the year it ‘s accrued and requiring the expected rate of return on investments be based on the previous 3 years of earnings? Call it the pension guarantee inititive. Hopefully, the gov organizations will be forced to reduce the pensions so the are affordable and be prevented from giving unaffordable pensions in the future.