A Wisconsin judge has denied a request to stay a ruling strking down voter ID. 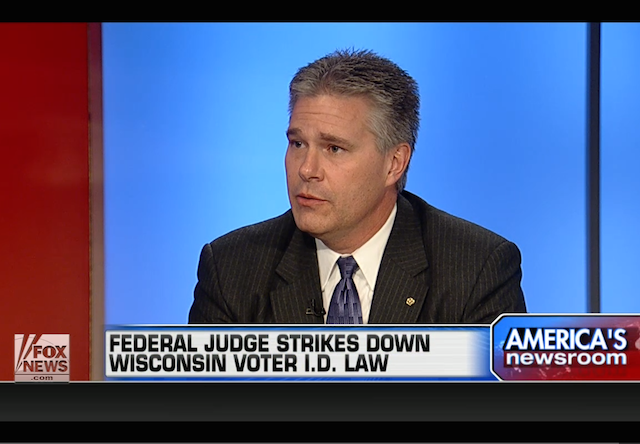 Opponents of Wisconsin’s voter ID laws won a small victory yesterday when U.S. District Judge Lynn Adelman denied the state of Wisconsin’s request for a stay of his decision forbidding the enforcement of voter ID laws. Judge Adelman rejected the petition because he felt that the state was unlikely to overturn on appeal his original ruling blocking the requirements from going into effect.

Wisconsin’s voter ID laws are currently under fire in both state and federal courts. Last month, the Wisconsin Supreme Court upheld the laws as constitutional, but this did not convince the District Court to set aside its original ruling.

Wisconsin Attorney General J.B. Van Hollen, however, is optimistic about his chances on appeal. He has already filed a petition with the U.S. Seventh Circuit asking the Court to allow Wisconsin’s voter ID provisions to go into effect for the November 2014 elections.

[Judge Adelman] clearly made a ruling that is contradictory to the law. The United States Supreme Court has already held that voter ID in some forms can be constitutional…this judge has essentially said that it can’t be constitutional, period, because it makes it harder for Latinos and African Americans to be able to get a photo ID and therefore to vote. That’s just not what the law is.
…
Judge Adelman went so far in his decision as to say if the state amends this law, come back to me, because I’m going to strike it down again. I think it’s tremendously important that you and I when we go to the polls know that our vote is going to count…and right now WI voting laws are so loose that just about anyone can show up to vote, purport to be somebody else, and get away with it. And it’s almost impossible for us in Wisconsin, as law enforcers, to prove that it’s been done.
…
Judge Adelman has gone completely against the verbiage in the Voting Rights Act, he’s gone completely against what our Supreme Court has already ruled, and I’m extremely confident that we’ll prevail.

The federal courts are split on the issue of voter ID. The fact that there is no clear mandate on the issue means that this is a fantastic opportunity for conservatives to drive the narrative away from race and age and toward solutions to the problems most commonly touted by those opposed to ID requirements.

General Van Hollen indicated that lawmakers in Wisconsin are open to amending current law as a way of addressing the complaints of organizations like LULAC and the League of Women Voters; this is what we should be talking about. Ideological arguments tend to get lost in the chatter, but if we commit to doing everything we can to give the people what they need to actually make their vote count, public pressure may just shift away from the courts and onto states—or even the DoJ—that don’t work as hard to protect the integrity of the vote.

You can read General Van Hollen’s appeal to the Seventh Circuit here.

Yes, but what relevance has relevance? Judges do pretty much what they want without consequences, so this could go on for a long time before it gets to the precedent-bound level of the judiciary. If there is one.

Relevance is irrelevant. Read your 1984.

Without reading the underlying legislation, I would first say “addressing the complaints of organizations like LULAC and the League of Women Voters” is exactly what the legislature should be doing, and Conservatives should be out front on this.

Even the Iraqis had voter id.

Only as long as those complaints are valid and are not just a way of trying to challenge a law that they don’t happen to like.

We have voter ID in Kansas and I have not noticed a single problem voting since it went into effect. In fact, the line moves faster and with fewer errors because you just show your driver’s license to the clerk and she uses it to look up your signature line in the book. Before, you had to tell her your name, spell it, and then correct her when she pointed out a relative’s name instead of your own. (she’s a little hard of hearing, but nearly all of our election volunteers are over fifty, so it comes with the territory, I suppose)

They hate it because it can’t be easily manipulated in a close election.

They also hate it because in states that have passed voter ID laws for the most part is has improved voter turn out. I tend to think that is because it gives people the sense that their vote actually matters.

You need to show ID, regardless of age, to buy beer in the local supermarket, yet people argue that you should be able to vote without proper identification. Is voting less important than drinking beer? A U.S. district court judge who ignores Supreme Court law is acting lawlessly and will eventually be reversed by higher level judges. But, meanwhile, he could do damage in this year’s election if it is close.

The leftist argument is that voting is a more fundamental “right” than all the other things you need ID for, and therefore you shouldn’t have to jump over the tiniest hurdle to do it.

But voting is also a power entrusted to citizens that has an effect, sometimes a big effect, on how other people may (or must) live their lives.

If you are going to have a voice in imposing policies on everyone that many of us find harmful, we can’t compel you to be informed and sensible about it. But you had better be the person you claim to be and you’d better be casting a ballot legitimately.

Guess what other place you must show ID to participate?

“Judge Adelman went so far in his decision as to say if the state amends this law, come back to me, because I’m going to strike it down again”

Which is enough grounds to get him recused. If a judge stated he has pre-judged any case (especially about a law that doesn’t even exist yet), let alone have been tried, that should be disbarment !

Actually the law was passes, if it hadn’t passed then there would be no standing to challenge it in the courts.

“…if the state amends this law” makking at least the amendments ‘new law’.

Hey, Voter ID would never be allowed in Minnesota, where so many Suburban voters came up to the voting precinct’s check in table holding their driver’s license in their hands, only to be told, that’s not needed.

Besides, with a Voter Id law, how could someone find a missing several hundred votes, mostly for Al Franken?

Ps: Using optical sense marking ballot takes away the ability to say something like: “Gee, all those ballots look like they were cast by one person!”

The Judge thinks Blacks and Latinos aren’t smart enough to get a state issued ID? Is he one of Sen Byrd’s Klan mates?