“A good way for release and clearing of the mind.” 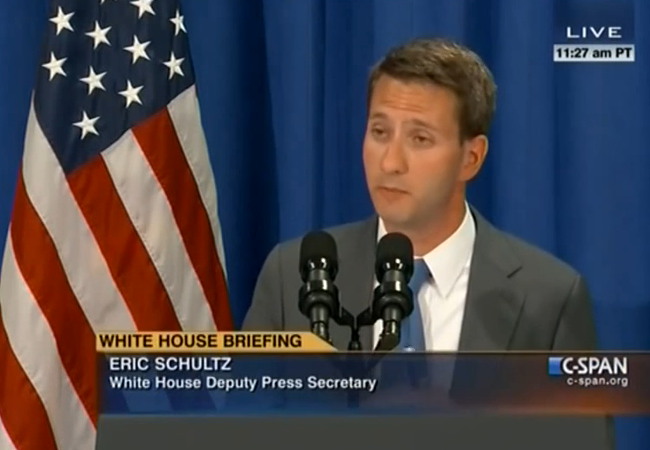 After making a brief statement about the murder of American journalist James Foley, Obama quickly returned to the golf course. Criticism followed from every corner of the political media landscape.

This weekend, White House deputy press secretary Eric Schultz was asked about it in a briefing and offered a weak explanation.

Andrew Johnson of National Review has the story:

WH Explains Obama Golfing after Foley Remarks: ‘Good Way for Release and Clearing of the Mind’

After two days of negative press criticizing President Obama’s decision to hit the golf course 15 minutes after he delivered comments on the execution of American journalist James Foley, the White House could only defend it by saying the president needed a “release” from all the issues facing him.

“Generally, I think that sports and leisure activities are a good way for release and clearing of the mind for a lot of us,” White House deputy press secretary Eric Schultz​ told reporters from Martha’s Vineyard on Friday. He refrained from speaking specifically about the president’s mindset when he went golfing 15 minutes after Wednesday’s press conference.

You do it at night.

And it has other beneficial effects. Plus no greens fees.

What’s wrong with the daytime?

You have to try during the day too. Your partner will surely appreciate it.

Yes, yes. My bad. I was setting it against “night-time golf”, which is pretty much NOT done.

I can recommend the “afternoon delight” modality. As a matter of fact, any time is a good time. Not so with golf, where you really need to know where your shot lays.

Gee … I guess they failed to test that line on a focus group. You just can’t make this stuff up.

The “why” is easy. His “dudes” didn’t think to brief him.

Meanwhile, the overriding purpose of the “I love golfing” optics is to divert from the locker room activities.

This one can’t be explained in any way that the public would buy. He is a selfish, sociopathic malignant narcissist. He does what he wants, when he wants. He doesn’t care how it looks. He has no empathy for the pain of others. They are bumps in the road on the way to his “greatness”. When others ask, “what about Foley”, obama will ask, “what about me?”

On point, exactly. Obama is achieving his goal of radically transforming this country. Two and a half more years in his second term and, WOW, we’ll be just like Europe in 1946.

Of course, he’s made a mistake in assuming we won’t make it back. We can and will, if we then vote out these Socialists now ruining our country.

I don’t think we will make it back. Too many Spanish-speaking illegals are here and coming here, and the spigot won’t be turned off. These people know nothing of American culture, history, and habits. They don’t speak English. They don’t act or think like Americans. They are NOT Americans.

When you see the handwriting on the wall, you can’t ignore it.

You have just described Barack Obama to a “t”.

“Release” my arse – the man is a selfish, narcissistic bastard who doesn’t give a flying fig whom the radical Muslims maim, murder, torture, rape, burn, desecrate, or otherwise kill. Just don’t bother him with trivialities like Muslim-made disasters. Let him golf / eat his waffles / fundraise in peace, willya?

How’d America get so blessed,’Yo?

I still haven’t come to terms with the fact that seven years after 9/22 we “elected” a man named Barack HUSSEIN Obama.

The “handwriting” walls refers to was on the wall then. And many of us are still evidently not reading it.

This is a bizarre thought/imagination, but extrapolated out of all of his golfing optics–it’s like he is figuratively (not literally) beheading America with his blatant disdain. And don’t let your imagination take you to the bizarre visual that one could get thinking about Obama 8 min after his speech about the horrific death of James Foley.

The thing is, it’s a pattern of behavior, not just a one time event.

I usually cry after I hear about someone who had been savagely killed by barbarians.

For Barry, El Narcissisto-in-Chief, he couldn’t dive any more in public opinion as far as he knew so he nursed his own wounds on the golf course surrounded and hob-knobbing with his sports idols. “Dammit Janet, I love myself.” was allegedly heard by the press.

Time to roll out the Affordable Sports and Leisure Activities Act.