Hamas suffers a big blow, but is its military chief dead or alive? 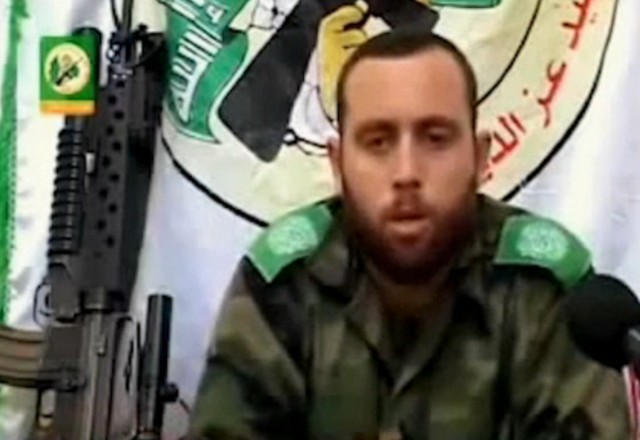 Following up on an airstrike that hit the house of terror mastermind Mohammad Deif, Israel killed three Hamas commanders last night. Raed al-Attar, Mohammad Abu Shmallah and Mohammad Barhoum. While there are still conflicting accounts as to whether Deif was killed or not, including a disappearing death certificate; three of his colleagues were killed.

The IDF provided background on the two primary targets, al-Attar and Abu Shmallah as well as Barhoum. 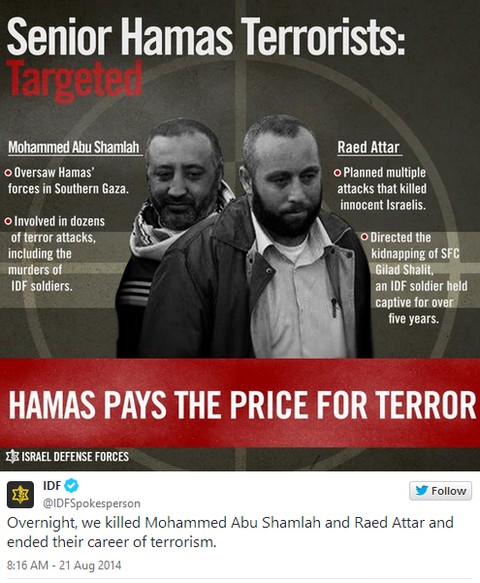 Raed Attar, who oversaw Hamas forces in Rafah, planned major infiltrations and other attacks that killed Israeli civilians. He was directly involved in the 2006 kidnapping of SFC Gilad Shalit, as well as efforts to hold him captive in Gaza.

In addition to planning attacks, Attar oversaw the construction of tunnels used to attack Israel through the Sinai Peninsula. As a senior Hamas operative, his major responsibility was to smuggle weapons into Gaza and oversee efforts to train and arm terrorists.

Mohammed Abu Shamlah directed Hamas’ forces in Southern Gaza. During Operation Protective Edge, 13 terrorists under his command infiltrated Israel through a tunnel near the community of Sufa. He planned dozens of terror attacks that killed Israeli civilians and soldiers.

In 1994, Shamlah was involved in the murder of an IDF officer in Rafah. About a decade later, he took part in a vicious attack against an IDF soldiers. During the attack, terrorists detonated explosives near an IDF military position, killing 6 soldiers and injuring 10 others. He was directly involved in the 2006 terror attack that led to Gilad Shalit’s kidnapping and killed two soldiers.

Muhamad Barhoun, whose death the IDF confirmed earlier today, was a senior Hamas operative in the Rafah area who smuggled weapons to terrorists. For several years, he lived in Libya and Syria, where he raised funds for the terrorist group and transferred them to Gaza.

Ynet provided some details of the operation and the coordination between the IDF and the Shin Bet.

N., the deputy chief of the Shin Bet, was in the command and control center in Tel Aviv keeping a close watch on the operation under the direction of the general security service’s leader, Yoram Cohen, when he gave the final green-light from an intelligence perspective for the IDF’s coordinated attacks from the air and land.

The final minutes before the targeted killing were nerve-wracking. The surveillance efforts on al-Attar and Abu Smallah had been underway for months, but the pair made a point of hiding within areas that the IDF would hesitate to attack for fear of harming innocent bystanders or because of insufficient intelligence.

Interestingly the planes involved in targeting the two terrorists were launched just prior to the attack.

But the operations was not over and within a few hours the Shin Bet received the long-awaited news – al-Attar and Shmallah, which had launched dozens of brutal terror attacks on Israel since the 90s, were killed in the attack. Rafah Division senior commander Mohammed Barhoum was also killed in the attack. Case closed.

The Shin Bet considered the attack on the pair and Barhoum not only as a punitive action, as they had recently planned large-scale attacks against IDF forces and held sensitive information on the planning and rehabilitation of the terror tunnel infrastructure.

This last point was reiterated in a statement made today by Prime Minister Netanyahu, who said that the three “were planning deadly attacks against Israeli citizens.”

The IDF released a video of the strike on the building that housed all three terrorists.

Perhaps what’s most important about the strikes against four top ranking Hamas terrorists is what it says about Israel’s intelligence gathering. Avi Issacharoff wrote in The Times of Israel:

It can be assumed that whether or not Muhammad Deif is still alive, those members of the Hamas military leadership who have survived are now desperately trying to figure out what went wrong. How could it be that after long weeks in which Israel was unable to get to any of the heads of the military wing, now, within 48 hours, the Shin Bet located one of Deif’s hideouts and killed three other members of the Hamas general staff?

It should be stressed again: Two of the three were not mere senior commanders of the Izz ad-Din al-Qassam Brigades. Muhammad Abu Shamala, the “head of the southern command” and Raed al-Attar, the commander of the Rafah area, were part of the founding generation of the Hamas military wing — along with Deif and several others who are no longer with us, including Mahmoud Al-Mabhouh and Emad Akel. They were among Deif’s closest brothers-in-arms — long-term veterans with experience and knowledge that cannot be easily replaced.

As far as the intelligence breach that Israel exploited. It had consequences. 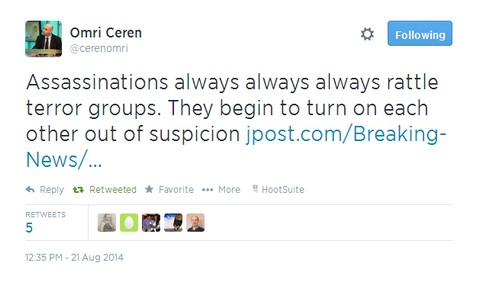 No doubt Hamas will try to replace them, but for a while Hamas’ operational capability has been severely damaged. Not only did it lose most of its tunnels and rockets, but at least three critical members of their hierarchy are gone now too.

Recent history has shown that while taking out leaders is always a good idea, terrorist groups seem able to replace them almost immediately. More permanent hurt comes from destroying infrastructure, which IDF is doing (tunnels, etc.), but mostly they need to destroy Hamas’ money machine.

Yeah, that’s because EVIL as in HAMAS has no brain.

For at least two recent Hamas leaders, that is probably now literally true.

The Mossad needs to send a wet team to Qatar and whack Khaleed Mashaal. That will dent Hamas.

AMEN, Steve!! The Munich Black Septembrists were hunted and assassinated wherever the human fecal matter could be found.

“…. ended their career of terrorism.”

It is always good when evil is defeated. In this case, the evil was well past it’s kill-by date.

There is but one way to deal with this 6th Century evil. Hey, Japan survived and is doing quite well.

Yeah Yeah, thumbs down on the mushroom cloud stuffs..

Maybe, no one is speaking because the bombs fell on Deif ears?

So they will be looking at each other wondering who betrayed who, watching their backs thinking every step might be there last!

Anyway, this attack is what I would refer to as “a great way to start the weekend” 🙂

May these slime-sucking Islamist Butchers turn on spits in Hell for Eternity…and then some.