Could happen any day in the shadow of a long ago failed state. 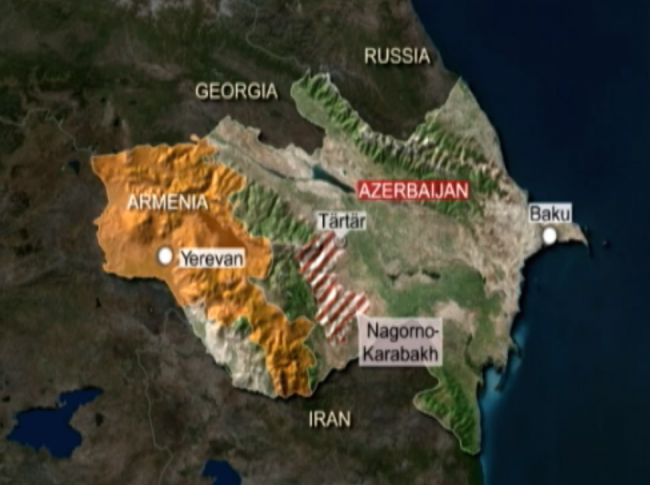 Never mind the turmoil in Iraq, Syria, Israel/Gaza, Western Africa and the imminent threat to Ukraine that Russia poses… there seems to be another war brewing.

The picture observed on the contact line during the last week and before that suggests that we are ready for any scenario.

Just as we have beaten the Armenians on the political and economic fronts, we are able to defeat them on the battlefield.

We will restore all of the occupied and destroyed cities. We will return to this land, we live and will live with this idea.

Welcome to another world hotspot seemingly on the brink of war. A two-decade lull in a historic conflict has eroded in two of the former Soviet Republics last week.

A six-year war between Armenian and Azerbaijani troops had been dormant since a truce was brokered by Russia 20 years ago — until clashes resumed in the South Caucasus region last week.

On Monday, the governments in Yerevan and Baku reported the worst bloodshed over the disputed territory in two decades had taken the lives of 13 Azerbaijanis and six Armenians.

Russian Foreign Minister Sergei Lavrov told the Itar-Tass news agency that he had asked the leaders of both countries to meet with Russian mediators in the Black Sea resort of Sochi on Friday to try to work out a plan to restore peace.

U.N. Secretary-General Ban Ki-moon on Tuesday expressed “deep concern” over the resurgence of fighting and urged the two countries to respect the long-agreed cease-fire conditions.

Here’s the more recent history of the historic conflict which Russia and the West helped resolve 20 years ago.

Nagorno-Karabakh, though largely populated by Armenians, was made part of the Azerbaijan Soviet Socialist Republic under then-Soviet dictator Joseph Stalin. But as anti-communist revolutions swept Eastern Europe in the late 1980s, Armenians in the enclave, backed by government forces from across the border, seized control, sending 700,000 Azerbaijanis fleeing for protection from Baku.

Although organized fighting ended with the 1994 cease-fire, a permanent settlement of the conflict has been elusive and hostilities have continued to simmer between the two neighbors.

It seems like the fall of European Communism — universally hailed as a turning point in human history — is now having unintended consequences decades later that are spiraling out of control. A cynical person might wonder if Vladimir Putin is stoking any of the Azerbaijan/Armenian tensions as part of his oft-stated plan to re-unite the Soviet Union.

Nevertheless, the simmering ethnic conflicts that pre-date World War One which were stamped down by the Soviet Union are now boiling over and threaten to explode in the 21st Century.

if not, BamBam will get on this right after his vacation is over…

unless he has a golf date or a fundraiser to hit instead.

Looks kike we’re about to get another geography lesson.

Please confirm that was a typo.

Your map omits Turkey to the south west of Armenia.

I have been to this region fulfilling a life long ambition to visit the mountainous region of Mt Ararat .. Looking over the Mountains after walking an historic ancient trail to a tiny Armenian church was just amazing .

Back to geopolitik , the hostilities erupted when a peasant dug up the gas lines in Nagorno Karaback a few years ago by accident & it nearly started up again. This is not an area the west is up on in terms of knowledge & I doubt they can get a handle on it quickly .

Thanks for the thread . There is just so much going on Imight have missed it .i. Had been thinking the Armenians might be up to something . One of the oldest Christian peoples might be making a pre emptive stand .

If all else fails, don’t we have a few more of those “reset” buttons lying around?

Nagorny Karabakh was the first part of the Soviet Union to blow up.
Soviets liked to mix up ethnicities: Armenians in Azerbaijan SSR, Ukrainians in Russian SSR, Russians in Ukrainian SSR, and so on.
Azerbaijan is pretty much a model Muslim nation, such as it is. Azeris are the largest Iranian minority, and would very much like a slice of Iran.

Is Russia boxing Azerbaijan in? Russia has been working with Iran to get Iran’s oil out from under the embargos .

Azerbaijan was top dog in the area after the USSR dissolution but it now has a big new rival in Turkmenistan with its massive natural gas fields . Is it a result of Cameron’s foolish Central Asian visit & mission statement to take the EU to Eurasia & the Urals? Azerbaijan have played a clever political game for 20 years but the EU courtship is too much for Moscow . This is my guess. I am not up 100% on Georgia , but it looks quiet . Georgia is Christian & no friend of Muslims . They are going to be boxed in if Armenia does the wild thang. Russia needs Armenia to block both Azerbaijan & Georgia from the EU /NATO fold.

Turkey is strangely silent . I see a possible pincer hold around ISIS led by Russia with Syria iraq Iran & Turkey .Putin has supplied Iraq with Su25s which are good enough to wipe them out .i also think They can’t let ISIS into Azerbaijan .( this is where Georgia is pinned – if they come from the north Caucasus & the east from Azerbaijan Georgia is toast.) What Sochi achieved with the consent of Georgia , was a thorough clean out .( Then spetnaz trotted off to Crimea) .

Story it’s a bit rambled but I’m just putting. This together having not read similar synopsis.

Also, Radi Free Europe has great reporting on this and other Former Soviet Union topics.

All those lazy-intellect people who inhabit our universities and spout platitudes like “Violence never solved anything” would be learning an important lesson if they were paying attention. And if the media were on its collective toes.

Sadly, though, no and no.

“The Armenian barbarians and vandals have razed the city of Agdam”

When did Armenia attack Agdam?

Turkey wants war, Erdogan is a model Muslim who has been purging Turkey’s government and military of people of impious (i.e. non-militant or who oppose Islamic rule) people.

A century ago there were three large autocratic multicultural empires in Eastern Europe. As these have been replaced by nation-states there has been horrendous ethnic violence, beginning with the wars between the Ukrainians and the Poles and between the Turks and the Greeks. This process was delayed by the reconstitution of tsarist Russia as the Soviet Union. For better or for worse, Putin’s policy is to reconstitute tsarist Russia as a family of nations dominated by Russia and extending everywhere there are significant Russian minorities.

This conflict between Armenia and Azerbaijan is simply beyond our reach. We are not going to contribute directly to its resolution. Putin’s Russia is in a position to play a constructive role here. Whether they will or not is an open question.

Azerbaijan is more of a westernized muslim country or at least it was when I visited several times a few years ago. They seemed to be busy scrubbing away the commie grime from their city. I saw very few scarves on the women, oh and BTW, the women were beautiful in general…raven-black hair and dark eyes…wait, where was I – oh yeah.
The Azeris have also been a friend and supporter of Israel too.