The banality of anti-Semitic violence in Europe

The banality of anti-Semitic violence in Europe

Bubbling to the surface so often it’s now just part of the landscape in Paris and elsewhere. 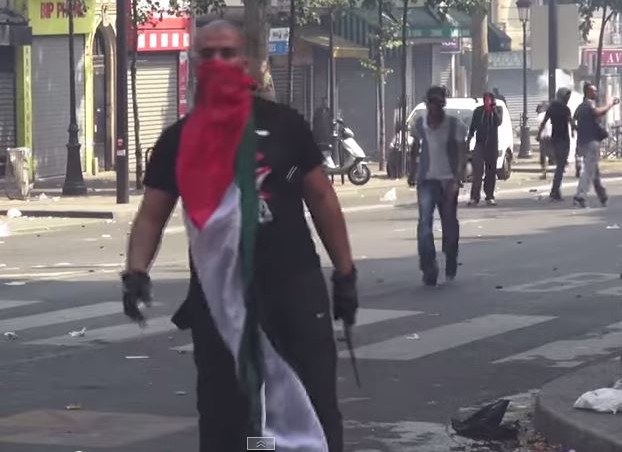 In recent weeks, we have covered dozens of instances of violence and harassment reflecting a simmering convergence of anti-Zionism and anti-Semitism worldwide, but particularly in Europe.

In Paris, the situation is particularly dire:

Cnaan Lipshiz writing in The Times of Israel, adds context that in Paris, the violence simply has become routine, a part of the background, Coming face to face with anti-Semites in Paris:

My friend Alain Azria gave me a puzzled look when I told him, with some indignation and disbelief in my voice, that I had just heard talk of killing Jews at an unauthorized anti-Israel demonstration last month in Paris

A young black man with a Parisian accent told a dozen friends loudly, but without shouting, “OK, guys. Let’s go hunt some Jews.”

His friend answered, “Let’s break their heads.” To which the first speaker replied, “Catch them fast, kill them slow.”

The group blended into a mass of thousands of people who were marching toward the Gare du Nord train station while shouting slogans accusing Israel of genocide.

My shock stemmed from the fact that while anti-Semitic violence accounts for a fair share of my reporting here in Europe, I have personally been insulated from it — perhaps because I live in Holland, where such occurrences are rarer, or maybe because I had lived most of my life in Israel, where one receives only a theoretical understanding of the phenomenon.

But for Alain, a freelance news photographer who specializes in documenting France’s anti-Semitism problem, this was just another day at the office. Which is to say he didn’t really have time for my astonished discovery of the banal….

Central to my understanding of the banalization of anti-Semitic violence in Europe were the July 20 riots in Sarcelles, a northern suburb of Paris with many Muslims but with a Jewish population large enough to earn it the nickname of “little Jerusalem.”

There I saw riot police fending off a predominantly Arab mob that, unable to reach the main local synagogue, had smashed the windows of Jewish and non-Jewish businesses while chanting “death to the Jews” in Arabic and French. The avenue leading to the synagogue was shrouded in a cloud of tear gas and black smoke that rose from several fires that crackled on the asphalt and tram tracks. Nearby, rioters hurled a firebomb at a synagogue, resulting in little damage. It was the ninth assault on a French synagogue since July 8, when Israel’s military operation against Hamas began.

Read the whole thing. Including the chilling ending:

I was feeling tipsy from the cheap banana beer and happy to have my new Cameroonian friends restore my faith in mankind when one of them began speaking hopefully of the bright future that lay ahead for his country when it finally taps its massive reserves of liquid gas.

“It will be heaven,” he said. “I just hope the Jews don’t take it away from us like they did in Germany before Hitler used that gas to kill them.”

Here’s a screen capture from January 2014 (can’t remember the source) of a protest in Paris in which signs were held up about Zionists holding Europe under foot: 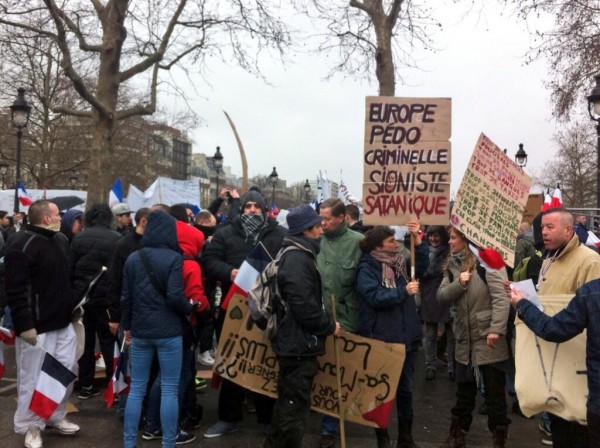 [Note: The author of the Times of Israel post, of course, chose the word “banal” based on the title of Hannah Arendt’s book, Eichmann in Jerusalem: A Report on the Banality of Evil]

When we don’t teach history, we cannot expect our young people to comprehend.

Are they still making young people in France? Or are they now only importing them?

Soon, close to a third of France’s poplulation will be Muslims from North Africa.

No confirmation on any front about the alleged bus attack in Sydney . No charges , no verification on the CCTV tape or bus driver statement ( the only adult witness) .

I am for the truth here . I have been looking at all the media but nothing . Not looking good for verification which social media is not . Either the boys ( likely savvy ) parents have a possible defamation case underway that has closed down updates / comments or there is nothing

.Anti – semitism is abhorrent but then so is publicly labelling someone anti Semitic without cause .

But Islam is the religion of “peace,” n’est-ce pas?

They should kick out the hate-filled cockroaches. They don’t deserve to live in polite society.

For a long time, I have been puzzled by the terms anti-Zionism and anti-Semitism. I see how everywhere they are referred to as totally different terms, but I’ve had a hard time trying to understand the difference.

So, for the last couple of months, I have been reading about the topic. I have read articles that explain the difference in detail. In the end, though I don’t consider myself an expert, I reached a verdict:

Anti-Zionists that claim they’re not anti-Semites go by:

“I don’t have a problem with Jews, as long as they don’t settle in Judea. Or anywhere else.”

Conclusion:
There’s no such thing as non-anti-Semitic anti-Zionism.

Furthermore the “anti-Zionist” rhetoric uses the exact words and phrases as anti-Semitic hate speech. Read it and you can see it just substitutes “Zionist” for “Jews” or “Israel” for “the Jews”.

Surely for the “intellectuals” spouting this stuff that lack of originality must be an even greater sin than mere bigotry.

Notice they attack Jewish-owned shops and synagogues, not even identifiably “Israeli” targets like consulates.

Message: every Jew is a “Zionist”

By the way, I don’t know if anyone posted this video before, but it’s a must watch.

This is a global racist hate campaign – plain and simple.

Any country that has allowed Islamist immigration is suffering for their generosity.

In some European nations it is a criminal act to say that there is something fundamentally wrong with Islam, or to say that Muslim immigrants are not assimilating and are often hostile to European values of tolerance.

This kind of stuff can only happen in a country with strict gun control laws.

You don’t think if a Jewish person shot / run over a black person it would not erupt thus in The Us ?

Not country-wide. At least, not yet. OTOH: