Interesting how this proposal comes just over two months before the election. 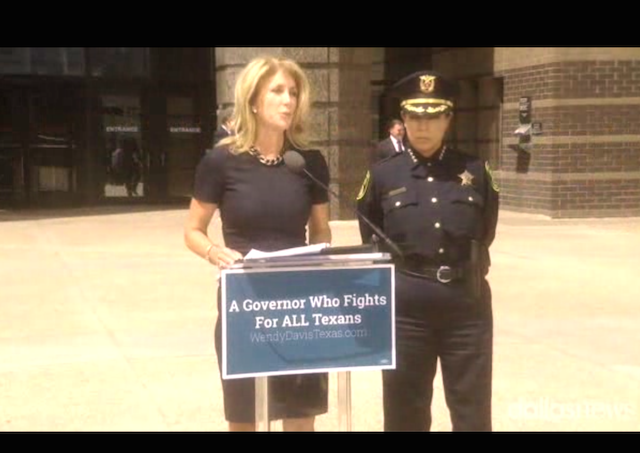 Earlier this month, Wendy Davis fell into the gutter with a new ad accusing current Texas Attorney General and fellow gubernatorial candidate Greg Abbott of being soft on rape. Politicos on both sides of the aisle were put off by the ad, and many consultants believe that she may have actually damaged her image with undecided voters.

Apparently her campaign staff realized this was a likely result of an ad that was basically an exploitative non sequitur, because this week Davis began touting her plan to end the statute of limitations on criminal sexual assault cases.

Via the Dallas Morning News:

In recent weeks, she’s toured the state touting bills she pushed in the Texas Legislature that led to rape kits being tested so victims could receive justice.

Last week in Dallas, she stood with Lavinia Masters and other rape survivors. According to Davis, Masters didn’t get justice because time ran out on officials seeking to close her case.

“Eliminating the statute of limitations for rape will help to right that wrong by making sure that survivors like Lavinia will never again will have to forgo justice just because someone stood back and let the clock run out on their case,” Davis said.

The Davis campaign pointed to several Texas rape case where the criminals got away with the crime because of the statute of limitations.

Davis’s suggestion, while potentially controversial, is not unprecedented. Eight states, including South Carolina, Virginia, and West Virginia, currently have no statute of limitations for prosecuting felony sexual assault.

Lawyers and analysts can argue all day about whether or not this would be a productive move for Texas, but that tends not to matter on an issue like this one, at least within the context of a high-profile election. Davis is using this as a way to set herself apart: her ad against Abbott tanked, and her past efforts to address rape kit backlogs are similar to those spearheaded by Republican-led bipartisan coalitions in Washington. Additionally, General Abbott revealed a plan back in February to protect children from predators, and curb sexual aggression in the form of “revenge porn.”

Because it’s left to the states to decide whether or not they want to put limitations on prosecution, this particular issue presents an opportunity for Davis to, if nothing else, cause a stir in the legal community and provide her campaign team with a brand new “women’s issue” to run into the ground.

That being said, this is an issue that resonates beyond the activist feminist community, and Davis has the advantage of an already-established emotional connection with many victims of sexual assault. If Republicans choose to ignore this connection (both on the state level, and on a national level,) they do so at their own peril.

Cool. Let’s put it to a vote in the legislature. After a full debate on the pros and cons…

well, and a lot of screeeching from hysterics in the gallery.

This isn’t an original campaign proposal or even a partisan issue. Either Party can claim it as a selling feature like Coke and Pepsi can list water as its ingredients.

Are there any Texans reading this? You can cut Wendy’s mic short just by getting Perry to add the same bullet to his campaign.

And, yeah, as sort of crass pol strategy goes, it is a winner. If he really supports the idea, I’d endorse him doing that.

If not, it’s just pandering.

Why is it Wendy Davis reminds me of the boy who cried ‘wolf’, chicken-little, Billy Ray Cyrus, Norman Greenbaum, et al?

Her idea is a BAD idea.

Someone else said : add this bullet to the (R) platform – really, really bad idea.

There is a reason statutes of limitation exist (except for murder, which I understand)

Currently the left is using sexual assault as their Trojan horse to re-write the rules of evidence, exceptions to protections of civil liberties, and limitations placed on prosecutors.

In colleges you see where they want to go.

We NEED to remember: the law is set by precedent – once a protection is gone, it’s gone folks.

“THIS is a heinous crime – we need ‘special’ rules for THIS crime.” – but then precedent is set.

I have to take exception to your representation.

A statute is not a “precedent” in the legal sense. It’s a law. And we change them a good bit. The limitations period on sexual assault was not always 10 years in Texas.

Even a case-law precedent is subject to change, and that happens pretty frequently, too.

You started to raise some good points with the suggestion that a limitations period has good reasons behind it. You should elaborate on those.

No, a statute is not a precedent, and yes, both the laws and precedents change … constantly.

Maybe I, not being a lawyer, did not state it in the best of terms, however, comma, my point, I believe is valid.

To whit: Right now, and it’s starting especially on college campuses, as can be seen on CollegeInsurrection, colleges are teaching people that moral relativism should hold sway – teaching that solid princicples and the bed rock of our legal system should be “squishy” because “THIS crime is ‘different'”.

Using these trojan horses will, and we’re seeing it creep ever worse by the year, erode basic principles of our legal system.

I’m sure you know, but I restate it anyways, but statute of limitations exist for a reason. Basic principles of how our justice system exist for damn good reasons.

Right now certain folks (I’ll say PC folks because not all leftists are kosher with this either) want to make a “some animals are more equal than others” mindset our guiding star in our legal system.

ONE way is to do away with the SoL (tired of typing it) go away. Death of our protections by a thousand cuts, and incrementalism is what I’m getting at.

Is what I was saying better stated in how I put it now?

I saw a piece that was linked by InstaPundit the other day.

Seems XY types commit sexual assaults about as often as us penis-bearers do, so this could be the biggest surprise for them you’ve ever seen!

I, myself, was sexually assaulted by an inebriated drop-dead babe back in my drinkin’days. heartbreaking though it was, I managed to man-Up and not report her. My feeeelings and Ish-Shoes are still bruised after 27+years.

Ya shedding a tear, Ragsy?

This is a pure political issue. An attempt to score points. Its legal effect will be practically nil. Proving a forty year old sexual assault claim is almost certainly from an evidentiary point of view a fools errand.

Texas already has no SOL if there is DNA. But very old DNA tests are vulnerable to vigorous challenge under the confrontation clause (see Bullcoming v. New Mexico, 564 U.S. (2011).

It is exactly what it seems to be…Desperation, from a candidate who knows that they have lost. Expect to see a lot more stuff like this from dems in the next couple of months.

If the Statute of Limitations for a particular crime seems inappropriate with changes in forensic technology or for other reasons, then that rationale should be laid out conscientiously and considered in the legislature. There were solid reasons for lifting the limitations on child sexual assault that have nothing to do with sexual assault generally.

Bad idea is not recognizing the game she’s playing here and failing to cut her mic short while there is time.

Bad idea is letting her lure the Texas GOP into a human-shield issue fight which will give Dems the opportunity to circulate the “War on Women” meme during the mid term election.

Bad idea is losing the Republic in the long run because our side refuse to master the art and science of retail politics and camouflage. Thinking that Principles is self-evident to a low-info electorate. Has 2012 not instilled any sense of humility, need for tactical thinking and maneuver?

What they do and say in Texas affects Republican candidates everywhere. I wish it wasn’t that way but that’s how the Media has set it up.

(Preaching to the Choir Mode Activated)
She’s proposing removing the statute of limitations on a class of crime for which is NOT “in cases where DNA is recovered but no match can be found.”

In other words, merely being in the vicinity of a woman could mean a rape prosecution 10-40 years later due to the ‘victim’ having “regained their lost memory via hypnosis” or “been suppressing their true feelings about the event.” In particular, I would be willing to bet a sudden surge of older liberal women who suddenly remember “that horrible thing that happened between them and (fill in name of Republican candidate here) back in college” which a certain prosecutor in Austin would be more than happy to indict based upon.

How in heck can anybody defend themselves against an accusation of something that supposedly happened so long ago? At least with DNA evidence collected by the police system, a defendant has the ability to disprove the false accusation, but without it, an aggressive prosecutor can totally wreck and bankrupt any defendant.

You put that soooo damn well.

BTW – we’re seeing this in the military right now. People who were in the armed forces in the 70’s and 80’s are being, no joke (was told to me in our SHARP training) being brought back on active duty, 20, 30, or 40 years later, to face criminal charges.

Yes, I got this second hand, but it was told to me in an offical briefing / training on sexual assault by a person who travels around the country to give this training.

Sexual assault does not end a human life. The alleged victim should report the crime immediately for investigation.

Abortion is murder, which artificially terminates human evolution, from conception to natural death. Abortion is the violent murder of a wholly innocent human life when it has no voice to protest nor recourse to self-defense.

Davis’s selective principles just may have an ulterior motive. No one actually believes in spontaneous conception, do they?

Clearly a move of desperation, a grasping for something that might create a spark, and clearly cynically chosen. It proves what is already known about Davis.

My takeaway on this is that despite how desperate the Davis campaign obviously is, it has chosen not to jump on board with Lehmberg’s indictment of Gov. Perry. Done right, it would provide a great opening for Davis, allow her to make Abbot comment publicly on it, take a stand, defend a party member, put him on defensive, etc., all great stuff, but….. it’s a false indictment, a political ploy, and everybody knows it. So bad, not even the Davis campaign will go near it. Well, yet.

Wendy, Honey-Bunny: Except—MAYBE—in Austin, you are Gone. History. Not even a bip on the meter. Buu-Byeeeee.